Sea-level rise is one of the “highlights” (if we can call it that) of our climate emergency, yet most of us know so little about it. For many, the polar bears on Coca-Cola’s cans are the closest they’ve come to the issue. But marketing campaigns and halfhearted sympathies do little for the most vulnerable species and people. We should be doing far more. We certainly can’t afford complacency in the face of sea-level rise. 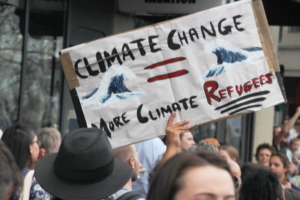 While flooding, erosion of beaches, and storm surges pose the most immediate threat to coastal communities and island nations, upland areas and even landlocked states are not immune to the consequences of sea-level rise. Eight of the ten largest cities worldwide are near a coast, and nearly 40 percent of U.S. residents live in populous coastal areas. Those who are able will uproot their lives and migrate landward or overseas, resulting in already overpopulated regions becoming more populated still.

Depending on our pathway, sea level is projected to rise between one and eight feet by the turn of the century. This mounting reality forces nations to simultaneously fight on two fronts: mitigation and adaptation. While many governments, organizations, and corporations continue trying to mitigate the worst-possible long-term damages, other communities find themselves in the trenches now, taking action to adapt to what already is and is to come.

Maldivians combat sea-level rise with artificial islands. Will it save them from going under? (CC BY-NC-SA 2.0, 350.org)

Small low-lying island nations are most vulnerable to sea-level rise. Even discounting coastal encroachment (which can vary significantly depending on region, season, etc.), low-lying islands experience the worst of extreme weather, which continues to intensify and become more frequent. With only so much higher ground and inland to retreat to, island governments are forced to choose: invest in ways to hold back the sea or plan for mass migration. Apart from a few instances of inland mass migration, it looks like the majority thus far have chosen to stay put and invest in defensive infrastructure.

The Maldives is perhaps the most vulnerable island nation, with over 80 percent of its roughly 1,200 islands less than a meter above sea level. Having recognized the problems of overpopulation and sea-level rise early, the Maldivian government began constructing Hulhumalé in 1997 and finished the artificial island in 2002 at a cost of over $32 million. Through a process called land reclamation, whereby millions of cubic meters of sand were pumped from the sea bed onto existing reefs, Hulhumalé was formed and is now home to roughly 100,000 people. Though the “City of Hope” was designed with sustainability in mind, it is expected to continue growing.

The Dutch have been building seawalls for nearly a millennium. With at least a third of the country below sea level, the Netherlands is synonymous with low-lying, inundated land and a comprehensive system of protective dikes. The Dutch quickly learned, however, that while dikes, dams, and other barriers were helpful, other costly and complex flood-control measures were needed for long-term security. Such innovations have been successful enough that other nations facing the early consequences of global heating look to the Netherlands for guidance. However, as waters continue to rise at an increasing rate and extreme weather becomes more common, even the Dutch are having to get more creative. A multi-billion-dollar project to reinforce the Afsluitdijk, the Netherlands’ first line of defense against rising waters, is just one preventative measure underway.

Like the Netherlands, the iconic canalized city of Venice has long experienced the blessings and curses of the water. In 1976, Venetian authorities announced MOSE, a project name which aptly evokes the water-parting prophet. The floodgate system, made of semi-permeable yellow steel barriers that retract under the sea bed when not in use, functions as a less oppressive eyesore for the sake of the Venetian tourism industry. It wasn’t until 44 years, the throes of a scandal, and over seven-billion dollars later that the floodgate system became operable, only to make residents wonder if it was all worth it. Once-exceptional floods over 4.5 feet are now happening regularly, as sea level continues to rise and the city slowly sinks.

Even if we could completely cut carbon emissions now, sea levels would continue to rise for the next century. As sea levels rise and warm, the migratory patterns of marine life are likely to change, posing another devastating threat—in tandem with overfishing—to impoverished coastal countries. Without food security, community health and wellbeing will decline, making it evermore laborious to adapt and respond to the changing environment. What are these nations expected to do without the resources needed to adapt? What if they cannot afford to migrate?

Effective coastal protection systems require tens to hundreds of billions of dollars per year to install and maintain, a large cost for any nation, but unfathomable for many who need them most. Low-lying islands such as Tuvalu, Kiribati, and the Marshall Islands are among the most-affected by and least-equipped to equitably address the effects of sea-level rise. Without funding assistance from wealthier nations for hard protection or mass migration (and opening borders for these refugees), the peoples of these islands and others like them will be forced to retreat inland. Internal migration will spark land-use conflict, ultimately causing many sacred and/or ecologically vital areas to be destroyed for human settlement.

The Vexation of Adaptation

The reality of climate change demands that we take measures to both mitigate and adapt for the sake of our survival. Mitigation is largely the burden of the wealthiest countries—having caused the bulk of emissions through insatiable growth—while underdeveloped, coastal countries are left to adapt to the decaying world they inherited. Communities confronted by the worsening effects of sea-level rise face an agonizing decision: to stay or to go.

Despite our efforts to mitigate climate change, sea levels will continue to rise long into the future. (CC BY-ND 2.0, go_greener_oz)

One of the many problems of adapting to climate change is the sheer magnitude of environmental and economic costs. Countries that can afford to construct manmade barriers and floodgate systems do so at a hefty price. Producing and operating such equipment requires resources, releases emissions, and often interferes with local ecosystems. Here, we’re faced with a bit of a Catch-22, where what we need to build to survive contributes to the problem that threatens our survival.

What’s worse is that many of these countries, despite such catastrophic futures, continue to believe that more growth is not only possible, but will save them. Yet GDP growth is tightly linked to greenhouse gas emissions; CO2 alone emanates from every part of the supply chain. Even fans of Coca-Cola’s polar bears know that the heating resulting from these gases melts ice sheets and glaciers, endangering Arctic ecosystems, and contributing to sea-level rise. What is often overlooked is that much of the global heating is absorbed by the oceans. As the oceans warm, thermal expansion occurs, causing “eustatic” sea-level rise. The problem with thermal expansion is that it takes only marginally higher temperatures to cause significant eustatic rise. Now that we’ve come to terms with our near-certain failure to limit warming to 1.5 degrees, we must also recognize that regardless of our mitigation efforts, any increase in global temperature will result in sea-level rise. Our incessant refusal to accept limits to growth and restructure our economic priorities will only exacerbate the problem.

Haley Mullins is the managing editor at CASSE, and recent graduate of George Washington University’s M.P.S. in Publishing program.

War and Peace and the Steady State Economy
2 replies

The New Herman Daly Bio: Confusion at a Critical Juncture and Other Misstep...

"Rappahannock County Courthouse" by taberandrew is licensed under CC BY-NC 2.0 Resisting the Temptation of Growth at the County Level
Scroll to top
$