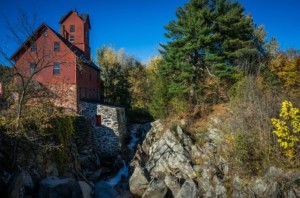 A local steady state economy will blend conservation with renewal and regeneration for our communities, our economies, and our ecosystems. Amidst rapid change, some small towns seem anchored to a long-gone past while others compete for unsustainable economic growth. We are looking for those towns pursuing the middle path. These towns will help us lead the transition to a steady state economy.

Currently, the growth paradigm shapes all types of policy at all levels, from international trade policy to national monetary policy to local planning policy. Unfortunately, small towns across the USA won’t be able to lead the world in reforming trade relations, balancing the national budget, or fighting inflation. However, they can lead with town planning by developing a new vision, protecting local lands and waters, and working to create the conditions for prosperity, health, and resilience in their communities. The steady-state domino effect will start somewhere, and it might just be in small towns where population is already nearly stabilized.

While in Vermont, I visited a few of my favorite places and chatted with people about the transition beyond growth. There were good conversations as well as lessons to learn in both urban and rural areas. 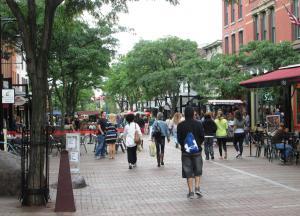 Burlington’s character is a result of the thoughtful leadership of the past, including once-mayor Bernie Sanders. Since 1980 Burlington’s leadership has managed to create a public park on the waterfront, ban cars from Church Street, and become the first US city to achieve 100% renewable electricity. In part due to these lasting changes, Burlington is frequently identified as one of the best places to live in the US.

Today, however, Burlington’s leadership has a different vision. Burlington’s current mayor, Miro Weinberger, is a developer who prioritizes economic growth. A current development-in-progress establishes 925 new parking spaces with 274 new residential units inside what will become Burlington’s tallest building. In fact, at 14 stories, the projected building is three times as tall as the buildings next to it, in the middle of downtown, on (carless) Church Street. There is strong resistance to this vision, manifest in discourse at public forums and the comments sections of news media. One commenter writes, “It is huge, hideous, out of character, and will stick out like a giant sore thumb.” Another writes, “The project is scaled too high so the developer can maximize his investment. This is our town – not his personal piggy bank.” Some citizens are fine with the particular development in question, but unsettled by the pace of change.

Burlington’s citizens have re-elected Weinberger, but voted for other changes in Burlington’s leadership. When campaigning for a seat on the city council, Jack Hanson wrote, “Under progressive leadership, Burlington saw its government put people first… I believe much of this spirit has been lost under our current leadership.” Now that Hanson has been elected, he is an ardent sustainability advocate. He was more than enthusiastic about signing CASSE’s position on economic growth, and not only does he intend to advance the steady state economy in Burlington, he believes that other politicians will join him. One of Burlington’s state representative’s, Curt McCormack, echoes Jack’s position. If this is a sign of what’s to come, it will be important to keep an eye on Burlington in the long term for leadership in “steady statesmanship” at the local level.

Of course, intentionally establishing a steady state economy runs counter to the instinct of many folks. As a nation, we’ve found ourselves in a vicious cycle, always spending and investing more while we accumulate more debt. When I spoke with one state senator, he was concerned with the rising costs that the state of Vermont faces. The state is fighting to maintain its credit rating, while it ranks 40th among US states in fiscal health, per the Mercatus Center[i]. Meanwhile costs such as health care and education go up year after year.

Amidst such immediate concerns, most people are not ready to discuss society’s overshoot trajectory, or the 50-year planning horizon, but that does not mean they won’t embrace a steady state economy. As towns and states make planning choices, sometimes less is more. These days, diminishing marginal returns are present everywhere.

Consider public health, for example. Despite the fact that we spend 20% of our income on healthcare, for the first time in recent history we are seeing a decline in average lifespan. More economic growth isn’t going to solve the problem.

According to the US Center for Disease Control, 90% of our 3.3 trillion dollar health care expenditure is on chronic disease, while 147 million Americans have preventable chronic diseases related to diet and exercise. What do doctors say now about heart disease, cancer, Parkinson’s disease, and Alzheimer’s? ‘Eat whole foods, and eat in moderation.’ What about dementia, depression, and arthritis? ‘Avoid loneliness!’ In modern society, many of the most significant improvements to our health come from eating well, exercising, spending time with friends and family, avoiding pollutants, reducing stress, being outdoors, gardening, practicing meditation or tai chi—all things we can expect more of in a steady state economy. Growing the economy, polluting our ecosystems, isolating the elderly, and working more so that we can spend ever-more on health care may actually be bad for our health.

Similar conversations occur regarding education. For example, as we see technology budgets for schools increase consistently, some suggest that this increase is not paying off. A 2015 report by the OECD showed that countries that had significantly invested in computer technology showed “no appreciable improvements” in reading, math or science. Unsurprisingly, many parents in the tech industry send their kids to tech-free schools[ii], while executives such as Steve Jobs and Bill Gates were known for strictly limiting tech-use for their children.[iii] Other studies have demonstrated that students with one hour of screen time were less curious, more easily distracted, had more difficulty making friends, managing their anger, and finishing tasks, while excessive screen time led to anxiety and depression.[iv]

There was a time when economic growth and technological innovation drastically improved our health, our understanding of the world, and our productivity, but in at least some cases today, such growth and technology are better replaced by wisdom. Conversations about progress and spending tradeoffs are happening all across the country; the topics range from housing size to new infrastructure development, to education, and healthcare. The transition to a steady state economy just makes sense to people.

Towns That May Lead

While at home, I visited the planning commission in Hinesburg, Vermont, where my parents live. The commission listened patiently as I spoke about the idea of a town transitioning to a steady state economy. The reaction ranged from curiosity to genuine interest and intrigue. “This seems like it would involve a fair bit of education and discussion,” noted one member of the commission. “This is very timely,” said another. The director of planning, Alex Weinhagen also expressed interest, noting that this was not only relevant for Hinesburg, but also the broader region.

In the coming months, we will be further outlining an approach to engaging town commissions such as the one in Hinesburg. We will build upon questions such as: 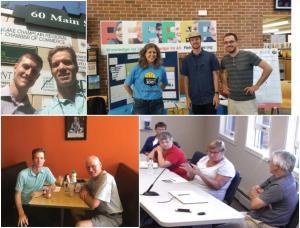 In a conversation that took place in the quaint town of Charlotte, Vermont, the board members of Better not Bigger Vermont (a non-profit organization) reflected on their efforts to promote big-picture sustainability dialogue. Vermont’s situation is not helped when the national government is pulling out all the stops for growth. This year’s increase in the defense budget is ten times the size of the EPA’s total budget. Further, many people are distracted by the current state of our democracy. The steady staters of Better not Bigger don’t want to give up though. After all, the conceptual foot trails of today will be the political highways of tomorrow.

We do find occasional hope at the national level, too. As a recent Fox pundit noted, there was one word missing in the second Democratic Party presidential debate: “growth.” That’s probably thanks in part to Trump’s objectionable display of growth-at-all-costs. Also, frankly, CASSE’s 16-year presence in the DC metro region has helped to lessen the pro-growth rhetoric of numerous political figures.

The fact is, advocacy for steady state economics can be done anywhere and everywhere, from local to global settings. For those who are looking for a place to start, ask your local representatives whether they would sign the CASSE position on economic growth. Let’s face it; the CASSE position is basically a litmus test for an understanding of limits to growth. It is also a proven tool for starting conversations and clearly delineating sustainability discussions.

In the coming months, we will be developing steady-state resources for planning commissions. If you are interested, contact us at info@steadystate.org.