When you look out your window, do you like what you see? Would you like to keep it that way? Are you afraid the forces of growth will deface, degrade, or “develop” your favorite places? Then Keep Our Counties Great is the campaign for you!

This county-level initiative has long been pondered at CASSE, and it’s time to act. This does not mean we’re forgetting about the nation as the focal point of fiscal and monetary policy. Nor are we dropping our obligations and interests in international diplomacy. Rather, Keep Our Counties Great will have synergistic effects, especially with our long-term legislative project, the Full and Sustainable Employment Act (our major amendments to the outdated Full Employment and Balanced Growth Act).

Many counties and closely related municipal governments are in the throes of the growth debate already. For example, the good Virginians of beautiful counties such as Rappahannock, Albemarle, and Roanoke are constantly discussing the pros and cons of further growth. These discussions play out in the opinion columns and letters to editors of local newspapers, which in many counties are the primary sources of civic expression and idea sharing. 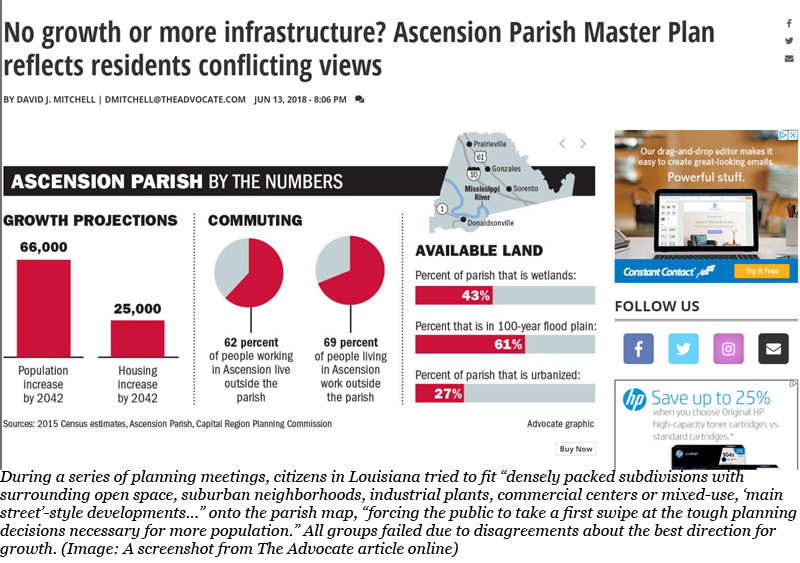 The county discussions take place verbally, too, in the town halls, council chambers, and Main Street diners. We—CASSE staff, volunteers, friends, and signatories—merely have to show up and talk shop about limits to growth and the need for a steady state economy, and we fit right in. Already our brief forays have garnered a collective response to the effect, “Now that makes sense. Why haven’t we heard of this before? The ‘steady state economy’—that’s exactly what we’ve been looking for!”

Virginia’s counties are far from alone in debating the merits of further growth. Nearly identical discussions play out in Colorado counties such as Pitkin, Garfield, and Eagle, in Louisiana parishes such as Ascension, St. James, and Plaquemines, and in Alaskan boroughs such as Juneau, Yakutat, and Fairbanks North Star.

In the New England states, the primary level of government is the town or, in some rural areas, the township. Yet the conversations in the local papers are the same: Should the beauty, peace, and calm way of life in towns such as Chittenden (Vermont), Waterville (Maine), and Dover (New Hampshire) be risked, or even knowingly sacrificed in some cases, for the wages of growth?

As with beauty, greatness is in the eyes of the beholder. All non-comatose Americans have heard about “making” America great “again.” At least one prominent politician believes the number one metric of greatness is GDP. His Manhattan-developer vision is super-simple and sadly simplistic: a furious rate of GDP growth, no holds barred.

In contrast at CASSE and for many counties, greatness has nothing to do with “making,” much less “again.” It’s more about protecting, conserving, and sustaining the greatness encompassing nature’s splendor, historical sites, cultural integrity, pride in workmanship, and social fabric.

Note that word “conserving,” especially the root word “conserve.” Have you ever asked yourself who the real “conservatives” are? Are they the humble folks down at the local farmland trust, protecting the bounty we are blessed with, or the Big Money bullies and bulldozers who come in and tear up the streets and the landscapes so integral to our greatness?

Osgood Castle is a mansion built in the early 20th century by a developer who wanted to open up Colorado to coal mining. (Jeffrey Beall, CC BY-SA 3.0)

Now it’s true that not every county would be viewed as great by its residents, other Americans, or even planetary aliens. Some counties are so full of litter and landfills and toxic pollutants that they will forever be pockmarked, literally and figuratively. These counties sit at the tailpipe of economic growth.

Usually in such cases it wasn’t the county residents’ fault that conditions deteriorated so badly. Rather, it was the obsession with GDP at the national level and the political power of corporate developers who “installed” the tailpipe in the county backyards instead of the CEOs’. Counties such as Ottawa (Oklahoma) and Passaic (New Jersey)—with lead contamination and a smorgasbord of contaminants, respectively—suffer a complex of GDP-related illth. The environmental deterioration is most obvious, but the environmental dots connect to public health disasters and all the way up to social stigmas that impact the economic futures of these tarnished counties. We might even call this complex of illth the Gross Domestic Problem.

Then there are counties with remnants of natural beauty and pockets of happy citizens, but so far down the road of GDP growth, they’re seldom seen as great any more. Take Kern County in California, for example. A sprawling county once splendid with mountains and valleys, fish and wildlife, health and happiness, has seen its splendor reduced to the public lands we taxpayers have sheltered from the GDP bulldozer. No one in any way associated with the word “conserve” could possibly leave the high sublimity of Sequoia National Forest for the low, foul air of Bakersfield without realizing that GDP is hardly what made Kern County great. God and Mother Nature made Kern County great; GDP did more to desecrate it than to conserve it.

So, the Keep Our Counties Great campaign is all about true conservatism; that is, conserving what we’ve been given, with the humility of precaution and the husbandry of care. It’s not about communism or central planning, much less eliminating economic activity. Nor is it about striking it rich, buying a spread the size of a county park, and posting a NIMBY sign at the gates. People do have to make a living. The overlooked part is that there cannot be ever more people and ever more GDP. As we like to say at CASSE, greatness is a steady state economy.

Construction of the Cross Street Bridge in Middlebury, Vermont has taken a cycle of more than 50 years of planning and abandoning the project. (Don Shall, CC BY-NC-ND 2.0)

How will we go about the Keep our Counties Great campaign? First, we’ll help to identify those counties where the growth debates have begun. Where counties have already “gone the way of the bulldozer” such as in Loudon (Virginia), Tarrant (Texas), and Cuyahoga (Ohio), we’ll probably take a pass. These county economies are runaway trains; any surrounding county will be hard-pressed to fend off the wreckage.

At the other end of the spectrum, think of a county that retains a healthy agricultural base, has a mixed economy with well-respected public and private sectors, and is occupied by conservatives and progressive thinkers with a sense of place. Doesn’t that sound like a great county to keep great? It’s probably a rural county you’re thinking of, isn’t it? And that’s a good sign for the Keep Our Counties Great campaign because farmers, ranchers, loggers, hunters, fishermen, and other participants in rural economies have the most common sense about limits to growth and the conflict between growth and their ways of life. Of course, most environmental activists get it as well, and so do a lot of small business owners, civil servants, and students who have taken the time to think about it.

Not all development interests are locked into perpetual growth, so we will try to work with them also. Construction contractors, surveyors, sand and gravel companies, fuel distributors, heavy equipment operators, road crews… many went directly into their occupations without a particular stance on growth. People have to make a living, and those types of occupations tend to proffer more jobs than in other sectors.

Each of these occupations will be needed in a steady state economy, too, but with a focus on maintenance rather than expansion. For example, houses need to be repaired, remodeled, and even re-constructed. Plenty of construction activity, in other words, may occur in the absence of “housing starts” (one of the closely monitored correlates of GDP).

What exactly will we do in those counties that seek to retain their natural, economic, and social greatness? At a minimum, we’ll help get the discussion going on limits to growth and the steady state economy as the sustainable alternative. Perhaps the maximum conceivable product is a comprehensive plan that serves as a transition from the current growth path to a great steady state economy.

In between the minimum and maximum, we’ll offer a menu of options. For example, we’ll be drafting a template preamble for existing or future comprehensive plans. The preamble will serve as the county’s acknowledgment of limits to growth and its desire to move toward a steady state economy. We will also offer to assist with growth impact assessments, demographic analyses, economic capacity studies, and perhaps even charters for establishing mini steady states in portions of counties, boroughs, parishes, or townships.

Coming full circle, do you like what you see when you look out the window? Chances are, if you’re in Rappahannock County, the borough of Yakutat, Ascension Parish, the town of Dover, or any number of beautiful, safe, and enjoyable counties, you like it a lot and you want to keep it that way.

And the more you think about it the more you’ll realize, “that way” is the steady state economy.

A Post-Growth Economy in France?
2 replies