Global heating has a greater impact on the Arctic than the rest of the planet. In fact, the Arctic is warming at a rate almost twice the global average. This is due to Arctic ice’s high albedo, meaning the ice reflects a tremendous amount of sunlight into the atmosphere. As the ice melts, the sea water absorbs more sunlight than it reflects. The resulting water subsequently warms and evaporates, becoming a powerful greenhouse gas. A positive feedback loop ensues as warmer waters melt more ice, and more water vapor adds to Earth’s greenhouse effect.

Arctic nations—the USA, Russia, Canada, Norway, Sweden, Denmark, Finland, and Iceland—view the thawing Arctic as an asset for tourism, fishing, and trade. Never mind the risks that come with shipping across waters that may contain icebergs, thanks to large ships called “icebreakers.”

The USA has two icebreakers in its fleet, and at least three more on the way. Russia, on the other hand, has at least 50. These nations recognize the value of holding power in the Arctic, and having icebreakers is a means to power. Nations that effectively use icebreakers in their Arctic fleets can grow their economies faster, improve the safety and efficacy of Arctic travel, and conduct scientific exploration. But at what cost?

Why Are Icebreakers So Loved? 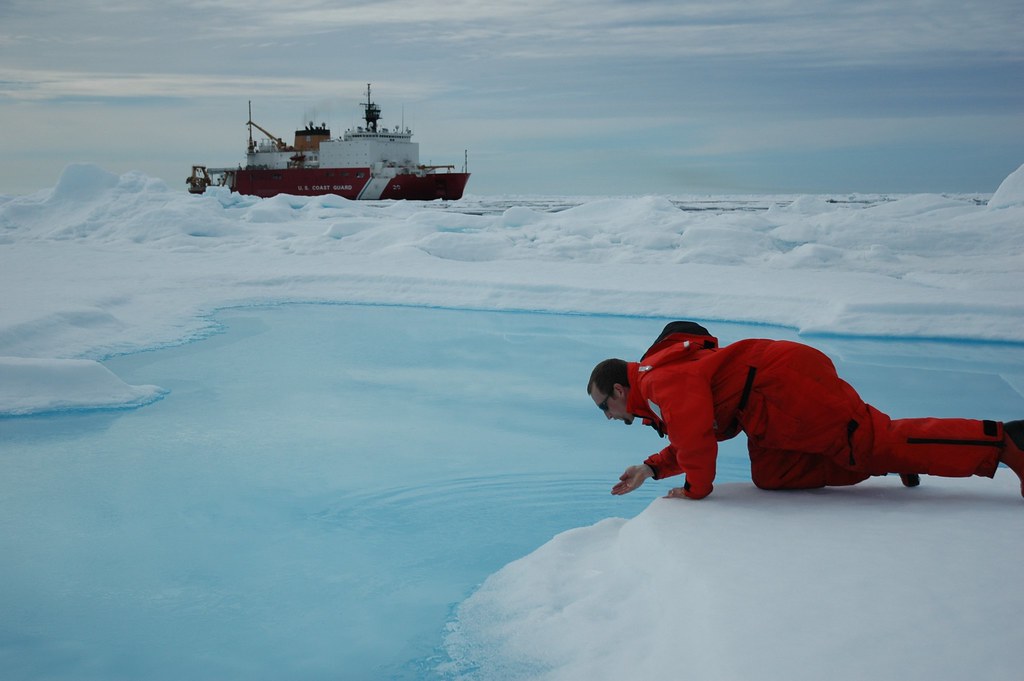 Icebreakers allow researchers to explore areas once considered unreachable, but at what cost? (CC BY 2.0, NOAA Photo Library)

The USCGC Healy, one of the USA’s two icebreakers, is primarily used for scientific research and is famous for its advanced technology. In recent years, scientists aboard the Healy have accomplished two notable feats. The first was the identification of a species previously unknown to science called ctenophores—organisms similar to jellyfish—distinguished by the groups of cilia they use for swimming (commonly known as “combs”). The second was the discovery of Chukchi pockmarks during the exploration of the Chukchi Plateau. Despite encountering treacherous winds and waters, the size and stability of the Healy allowed researchers to continue mapping and studying the pockmarked area.

Another important asset of the Arctic is the Northern Sea Route, which lies east of Novaya Zemlya, Russia, and runs along the Russian Arctic coast by Siberia to the Bering Strait. As Arctic ice continues to melt, this route becomes more alluring for transporting goods across the North Pole. With the help of icebreakers cutting through remaining ice that could impede travel, the route reduces transportation time and costs, making it the most efficient route.

Icebreakers are also invaluable in Arctic search and rescue missions. The Arctic Council (an intergovernmental forum that addresses issues faced by Arctic governments and indigenous Arctic people) has taken action to allocate search and rescue resources on an international level. All eight Arctic nations signed the Arctic Search and Rescue Agreement in May 2011, making it the first legally binding agreement negotiated under the auspices of the Arctic Council.

Cold War Races in the Arctic

During the Cold War, the USA and the Soviet Union raced to pioneer new technology and discoveries, while competing for the greatest GDP. The Arctic was one arena for Cold War competition; whichever nation had the greatest presence in the Arctic would be better positioned to exploit Arctic resources and gain a significant advantage in climbing the GDP ladder.

Between the 1960s and the early 1980s, the Soviet Union launched Project 97, which added 32 new icebreakers into the Soviet fleet. These were a series of diesel-electric icebreakers, several of which are still operated by Russia today. The Soviets had plans to revive military bases on islands in the Arctic Sea, a move that would prevent the U.S. Navy from deploying into the Arctic.

During this time the USA also introduced a new class of icebreakers into its fleet, known as the Polar class. These two Polar class ships were designed to support science and research, provide resupply to remote stations, launch search and rescue missions, escort ships, protect the environment, and enforce laws and treaties in places other ships cannot reach.

In 2020, President Trump released a memo calling for a new fleet of icebreakers in the Arctic. This, in part, reveals the Trump administration’s concern about Russian and Chinese presence in the Arctic, a concern reflected throughout the U.S. population. When Americans were asked to rate their feelings toward Russia on a zero-to-100 scale, Americans averaged at 29, the lowest reading since 1982. The USA’s attitude towards China in 2020 was similarly negative, with 73 percent of people surveyed claiming an unfavorable view of China.

Since national sentiments towards Russia and China were overwhelmingly negative, President Trump produced a memo to address concerns. Trump announced his administration would create a plan within 60 days of the memo release to construct at least three heavy icebreakers by 2029 to compete with the growing Russian and Chinese presence in the Arctic. The Biden Administration has yet to retract this plan, so these icebreakers are still under construction.

What’s Missing from the Conversation?

Little information is available about the environmental concerns that icebreakers pose. Literature highlights the perceived “positives”—scientific exploration, search and rescue, trade and shipping, and competition amongst nations—as being more important than considering environmental degradation. However, here’s what we know.

Icebreakers break ice. As the broken ice melts, sunlight is absorbed, leading to increased temperatures, and thus more ice melting. An icebreaker cruising through the ice for 1,000 kilometers (620 miles), leaving an ice-free wake of ten meters (33 feet), would open an area of water ten square kilometers (3.9 square miles) over the entire cruise. Although the Arctic Sea covers about 4,000 kilometers (2500 miles), any amount of ice breaking harms the environment. With the continual use of icebreaker ships, the Arctic will continue to look more like ice cubes melting in a glass of water. 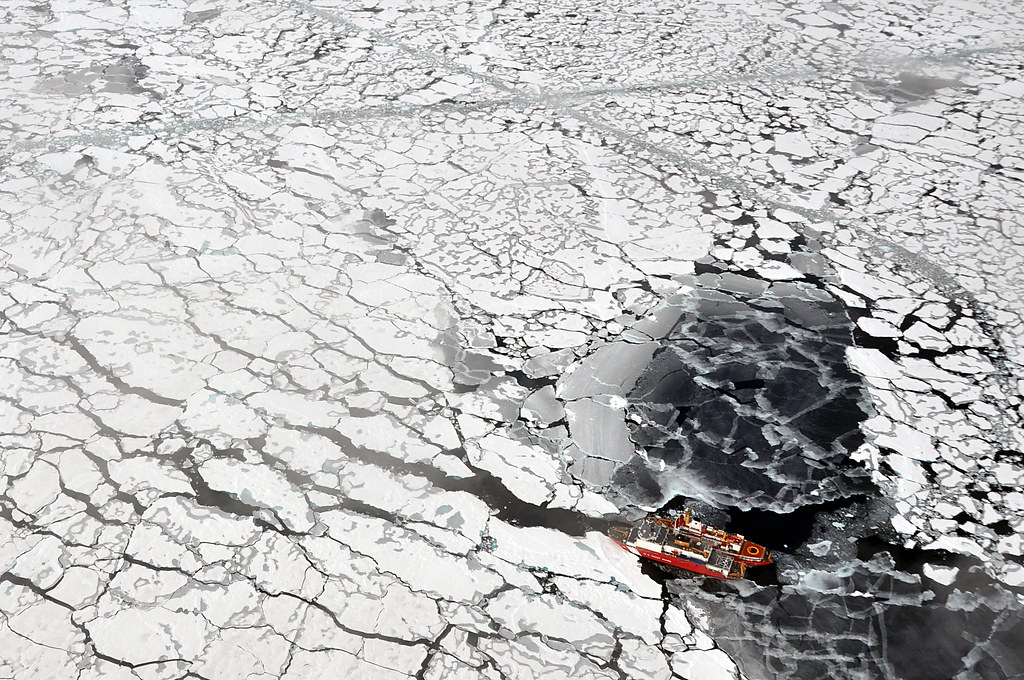 The Arctic: melting ice cubes bobbing in a glass of water.

As melting endures, we will continue to see environmental effects around the world. Changes in the Arctic Sea ice pattern leads to a rise in sea levels globally. Low-lying developed areas in the Gulf Coast and the mid-Atlantic regions are especially at risk from sea-level rise. The recent growth of coastal areas has resulted in larger populations and more valuable coastal property being at risk from sea-level rise. Major physical impacts of a rise in sea level include erosion of beaches, inundation of deltas as well as flooding and loss of many marshes and wetlands. Increased salinity will likely become a problem in coastal aquifers and estuarine systems because of saltwater intrusion.

Changes in Arctic ice patterns are also leading to more frequent extreme weather. In the past few years, such extreme weather has been seen particularly across the east coast of the USA, western Europe, and central Asia. These regions will continue to experience more extreme weather because of Arctic amplification, the enhanced sensitivity of high latitudes to global heating. Arctic ice melt has also been shown to distort the flow of and weaken the jet stream, resulting in more frequent periods of intense heat and ferocious cold.

There’s also evidence that the sound emitted from icebreakers is detrimental to marine animals, particularly whales and other large mammals. The sound interferes with their ability to communicate with their pods. Additionally, sound pollution likely has long-term effects that are difficult to predict.

Most of the Russian icebreaker fleet is nuclear-based due to the fuel costs of running an icebreaker. On average, an icebreaker working in regions with three-meter-thick ice uses more than 100 tons of fuel per day. However, nuclear icebreakers have obvious concerns as well. In fact, should an accident occur, the consequence would be as severe as the Chernobyl disaster and the Deepwater Horizon oil spill combined: devastating.

What Should Be Done? There is indeed much more research in support of the use of icebreakers than documented concern for the ships’ environmental impacts. Beneath the bias of growth, it’s clear that icebreakers are largely detrimental. By continuing to add more icebreakers into the Arctic and simultaneously ignoring the environmental consequences, we are making yet another mistake that could be avoided.

A potential treaty could manifest in many ways. One option is to divide the Arctic Sea into zones and designate certain zones as “no break zones,” where icebreaking would be illegal. This would allow nations to continue using icebreakers to a lesser extent while the international community monitors the environmental effects. With this option, zones could shift and change depending on weather and ice patterns.

An alternative could be a plan to phase out icebreaker ships over many years. This would allow nations to find other ways to accomplish important tasks that icebreakers achieve in the Arctic, such as search and rescue missions and scientific research.

However, before an anti-icebreaker treaty can be successful, there needs to be an international agreement on environmental protection in the Arctic. A common goal amongst Arctic nations must be concern for the environment, or we risk edging closer to a world in which the Arctic Sea looks like the Atlantic Ocean. Arctic nations must understand the impending doom that comes with breaking and melting Arctic ice. Once these nations take responsibility for protecting the Arctic environment, then an anti-icebreaker treaty can be developed and signed, and we can take one crucial step towards protecting the Arctic.

The Colorado River: Devoured by Growth
Scroll to top
$