The situation in Ukraine is undoubtedly complex, but it may be as much about a scramble for growth and fossil fuel as it is about ethno-cultural identity.

Europe’s dependence upon Russian fossil fuel helps explain why the Russian leadership has been able to act without fear of retribution. Over 50 percent of Russian gas exports to Europe pass through Ukraine, and Europe relies on Russia for 40 percent of its imported fuel.

The energy sector drives the European economy as well as the world’s high-finance casino, in which speculative claims on fossil fuel inflate dividends to inequitable heights. Yatsenyuk acknowledges that “[the Russians] sell oil and gas mainly to the EU and then take Euros, dollars and pounds — and buy weapons [and] military equipment.” This creates a vicious cycle in which super-inflated fossil fuel dividends can be leveraged to buy even more military equipment, which is in turn used to control fossil fuel infrastructure. And voila — uneconomic growth. 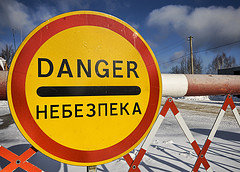 Pursuit of cheap energy and unending growth spell danger in Ukraine and elsewhere around the world (photo credit: Trey Ratcliff).

The resulting concentration of wealth in the hands of the few appears to feed nationalist fervor at home just as it buys political favor abroad. Russia’s biggest players have been investing around the world for years, but references to Russian power and influence belie the extent of Russian inequality. Russia “has the highest level of wealth inequality in the world, apart from small Caribbean nations with resident billionaires,” according to a 2013 report by Credit Suisse. In Russia, 110 billionaires hold a shocking 35% of all wealth; globally, billionaires collectively account for only 1-2% of total household wealth.

My intent is not to characterize Russia as the classic American villain. In fact, Ukrainian nationalists are, by some accounts, as menacing to Ukraine’s future as Putin’s Russia, and there is plenty of Western hypocrisy for a second editorial. What we need to consider is that the remaining Russian carbon should not be removed from the ground, and all of the supposed spinoff benefits — the military buildup, the further fuel extraction, the super-inflated dividends — generate harmful growth that benefits only a few.

Yet according to the outdated neoclassical script for economic success, growth is signalling to some that Russia is somehow on the right track — a display of power, progress, and innovation. Like other present-day examples, including nationalistic rhetoric surrounding tar-sands production in Canada, dogmatic support of growth is more accurately characterized as hubris, stagnation, and ill-advised development.

The planet’s life support system doesn’t have time for a rehearsal of twentieth-century nationalism fed by a rush for cheap oil; nor will the “victors” in any contemporary power struggle have the opportunity to cash in their casino winnings. Without embracing a post-growth paradigm shift, we’ll all be in for a gruesome ride. With cheap oil and the casino economy fading into history, we need to adopt a steady-state economy and give everyone a chance at winning; otherwise we’ll have to accept senseless land and resource grabs in which everyone loses.

James Magnus-Johnston is the Canadian Director of CASSE and a professor of political studies and economics at Canadian Mennonite University.

A Steady-State Analysis of the 2020 Presidential Election
2 replies