Labor Day, like other holidays of remembrance, is an opportunity to reflect on the past and critically consider the future. Our memory ought to include the foot soldiers of the labor movement, from the 10,000 coal miners who fought in the Battle of Blair Mountain to the steel workers who duked it out with the Pinkertons at Homestead mill. We owe our rights as workers to the bitter struggles of many who preceded us.

Despite the gains of the labor movement, it seems we still have a long way to go. It is well-documented that while the productivity of the American worker has continued to rise, our compensation has risen slower. All that extra surplus has gone right into the bosses’ pockets; Mother Jones would be up in arms by now.

One result of the asymmetric rise in wages and productivity has been worsening income inequality. Some would argue that economic growth will fix the problem. After all, a rising tide lifts all boats, right? Brian Snyder didn’t think so, and neither do I based on the following findings. 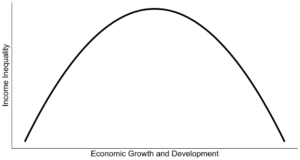 Figure 1. The Kuznets curve is a graphical representation of Simon Kuznets’ theory on inequality and economic growth.

The earliest and most influential economist to write about economic growth and income inequality was Simon Kuznets. He compared income data from developing and developed countries from the 1920s through the early 1950s, and found that the poorest 10-20 percent of households in the developed countries were earning a growing share of GDP while the top 10-20 percent were earning less. In developing countries, the reverse occurred; as these countries grew in terms of GDP (and developed in terms of GDP per capita), inequality worsened.

This stark contrast between developed and developing countries led Kuznets to speculate on the relationships between growth, development, and income inequality. He theorized that as a country grew and developed initially, its workforce would switch from agriculture to industry and rural to urban. The cost of migration and learning new skills would cause the laboring class to lose wealth and income while the capital class benefited from the increased output. Afterward, as labor became more skilled, laborers’ share of income would increase. In other words, Kuznets thought that economic growth would worsen income inequality initially, but ultimately lessen it.[i] Graphically, this appears as an inverted “U”—hence its nickname, the “Kuznets curve.”

While Kuznets’ analyses were groundbreaking for the time, the times have changed. When we consider the same countries Kuznets did, we discover that his initial findings no longer reflect today’s trends. 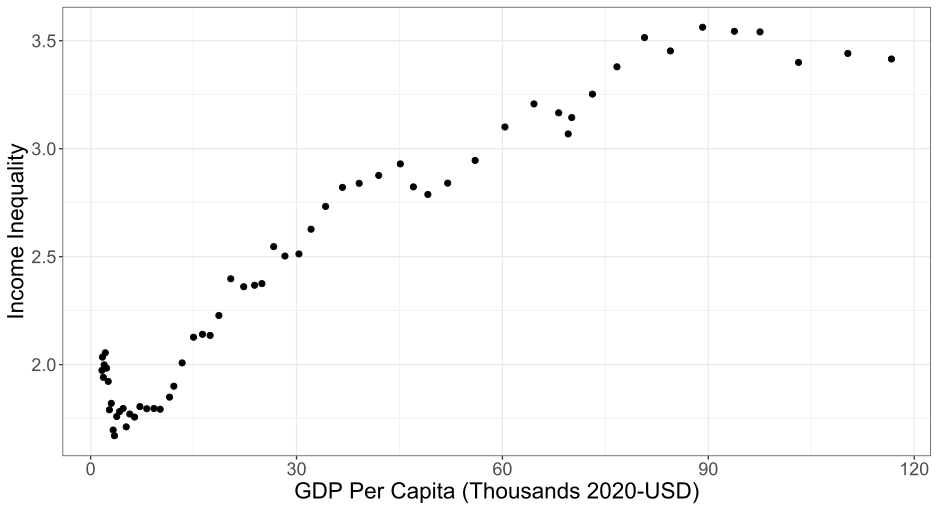 Data from the last 60 years provide insights on how the economy (in per capita terms) and the income share of the wealthiest Americans have grown.[ii] Towards the lower end of GDP per capita, we see that growth accompanies decreased inequality. Those data points happen to come shortly after Kuznets’ famous findings. The trend does not last, though, as inequality starts to increase again around 10,000 dollars of per-capita GDP, and per-capita growth thereafter benefits the wealthy disproportionately.

Keen observers would note that inequality seems to be leveling off, suggesting the USA may be at another turning point like the one predicted by Kuznets. While this is plausible, several supposed turning points appear along the continuum of GDP per-capita growth, and are consistently followed by subsequent increases in inequality. How many bobs at the apple should the late Kuznets get? And, if we have a number of mini-Kuznets curves over time or at different levels of income, is that really a Kuznets curve at all?

While it’s possible that a few more years’ worth of data could see a true decrease in top earners’ shares, it’s likely that deliberate policy choices are mostly to blame for the expanding wealth of the rich.

So, what are these policies? An extensive examination by the Economic Policy Institute (EPI) sheds some light on many of the major policies that have eroded American labor including:

All of these policies and oversights are symptomatic of a growth-driven mindset aimed at increasing consumption and output. These types of policies echo the adverse working conditions and standards that ignited the American labor movement and should be met with the determined opposition of Samuel Gompers himself!

A Just and Equitable Steady State

Addressing income inequality requires a societal desire for equality, followed by regulatory action of the government. We must be intentional and explicit with policies crafted for an equitable distribution of wealth as well as a sustainable size of economy. As Herman Daly argued, we need institutions that “limit the degree of inequality … since growth can no longer be appealed to as the answer to poverty.”[iii] For that matter, we can’t simplistically assume that degrowth or a steady state economy would ensure fairness either. Income fairness (not necessarily absolute equivalence of incomes or wealth) is a goal worth formulating policy for.

The violence and general unrest that characterized the labor movement is symptomatic of the link between social stability and income equality. Steady staters should consider and craft policy instruments to address income and wealth inequality. After all, how can a state be steady if it isn’t stable? 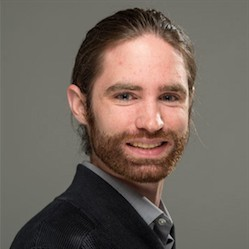 Why Bargains are Bad
4 replies

Introducing the Forgoing Flights for America the Beautiful Act

Next Big Thing or Next Big Mistake?
Scroll to top
$