For many people, one of the causes of our obsession with economic growth is our belief that it will make our lives better. We think that with a little more money and a little more financial security, we will be able to better provide for our families, pay for our children’s college, and eventually retire, perhaps not wealthy but safe in the knowledge that we will never be poor.

For others, economic growth is needed as a means to help the poor. We drive around our communities and see a great deal of poverty—people without healthcare, food, or decent housing—and think that if we had a bit of economic growth with the new businesses and jobs it brings, we could alleviate this suffering.

These are noble and understandable goals, but they are based on a faulty assumption: A rising tide lifts all boats, and national economic growth increases financial stability for the middle class and raises the poor out of poverty. There was a time in American history when this was the case. But for the past three decades, economic growth has almost exclusively benefitted the top 10 percent, and done little to nothing for the bottom 50 percent.

Economic Growth and the Unequal Distribution of Wealth

Moving more broadly to the estimate of wealth, the trends remain the same. The top one percent of the nation own 30.5 percent of its wealth, up from 24 percent in 1989. Meanwhile, the bottom 50 percent’s share of wealth has declined from 3.6 percent in the late 1980s to 1.9 percent today.

Of course, these statistics do not necessarily imply that the poor and middle class are growing poorer, but they do imply that the benefits of economic growth are not spread evenly or equitably. The bottom 50 percent, or perhaps even the bottom 90 percent, support an economic system that is built for the benefit of the top ten percent. We support this system because we believe that it is the means to move from poverty to prosperity, but it turns out that this prosperity is not our own. 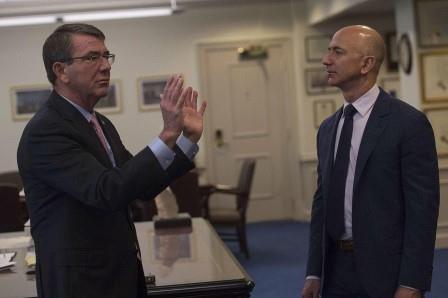 What is especially galling in this situation is that this growth is an affront, not just to steady-state heterodox economics but to neoclassical economics as well. Jeff Bezos, CEO of Amazon, made $5 billion dollars last Wednesday, enlarging his fortune to $188 billion. Inexplicably, that was not his personal best. Neoclassical economists assume that utility plateaus as consumption increases. That is, there is some amount of money beyond which further income does not add to happiness. Certainly, this limit to human utility must be decidedly south of $188 billion dollars. If so, then why do we have a system that encourages billionaires to build wealth ad infinitum?

Critics will argue that the rising tide of economic growth has indeed lifted all boats. They will argue that poor and middle-class Americans are richer than we were 20 or 30 years ago. Certainly, we all have more stuff than we did a few decades ago, and our stuff is fancier and more expensive. So, in a sense, such critics would be correct. But they neglect the fact, described by Herman Daly and John Cobb long ago, that wealth is at least partially relative. Humans are social animals, and one of the ways in which we situate ourselves on the social hierarchy is through wealth. Thus, what matters is not just how much stuff I have, but how much stuff I have relative to that other guy. Therefore, in a very real sense, when the rich get richer faster than the poor get richer, the poor really do feel poorer.

Unbeknownst to most, this economic growth that benefits the rich extracts a cost on natural resources and the environment. Our aquifers are being depleted, fisheries are in decline, forests are disappearing, air is toxic, oceans are acidifying, soils are eroding, and the planet is warming. At some point, perhaps next year or perhaps 100 years from now, these environmental crises will become a global humanitarian crisis. Indeed, climate change may already have contributed to the war in Syria, the most terrible humanitarian disaster of the 21st century. Yet when this socio-ecological crisis comes, who do we imagine will suffer the consequences? Will it be the children of the one percent, or the children of the bottom 50 percent?

Who Will Pay the Price? 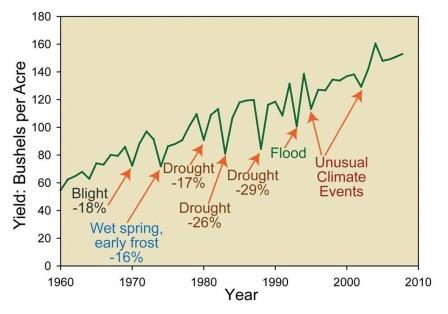 Impacts of climatic variation on corn yields in the USA. Source: EPA.

A year ago, we might have thought that we were all equally vulnerable to an infectious disease. Certainly, we would expect differences in population density to impact transmission, but not differences in wealth. While it is certainly true that the rich and poor get COVID-19, it is not true that we have all contracted it at the same rate. African Americans and other minority groups have been disproportionately impacted as well as people living in areas with historic particulate matter pollution.

The same pattern is likely to hold for the next environmental crisis, whether it is another pandemic, a climate-induced famine, or some new terror that we have not yet imagined. The poor—the people that live in polluted locations with less healthcare, more violence, and more food insecurity—will pay the costs of environmental degradation, either through a reduction in the ecosystem services they rely on, or via an increase in ecosystem disservices like parasitism, fires, and extreme weather.

In sum, the richer have gotten richer through economic growth while the poor and middle class have grown relatively poorer. Furthermore, the children of the poor and middle class will pay for this growth. In a best-case scenario, they will pay higher taxes to pay off the government debt the rich have required to fuel growth and build the infrastructure needed to resist the various environmental crises that befall them. In a medium case, perhaps they will also be displaced from their homes. But in a worst-case scenario, they will pay with their lives.

Of course, they already do. Globally, over 3 million people die each year from air pollution, with about 200,000 of those deaths in the U.S. Lethal air pollution, mostly in the form of particulate matter, is a direct result of our economic activity, and it has increased in China and India in recent years because of the globalized world we created to fuel our economic growth.

Given this ludicrous yet abhorrent situation, I wonder what the first step should be. Not a long list of radical policy ideas, but the first, moderate step. A step someone like Joe Biden could take to slow growth and change the beneficiaries of the growth that remains. Reversing the Trump tax cuts would certainly be helpful, and it is in Biden’s plans, but that seems almost trivial compared to the scale of the problem. Instead, I think we must change the mandate of the Fed to favor employment rather than growth. That seems like real progress that is symbolic and meaningful. It is radical without being overly so, and it is the sort of change that may gain popular support. Perhaps, if Biden is elected, advocates of the steady state economy might focus on one or two such policies with the broadest appeal. Policies that, while not turning the train of economic growth around, at least start tapping the brakes.

Colorado River: “Lifeline of the Southwest” Suffering Effects of Economic...

A Life on Our Planet: A Tentative Step Toward Mainstream Steady Statesmansh...
Scroll to top
$