Bargain-hunting has become a cultural obsession (my father in law, bless him, used to drive a good way across town so he could buy day-old bread that a flyer had promised was a nickel a loaf cheaper; my neighbor trolls the Internet for wine a dollar cheaper, or a lawnmower he can get for a hundreds buck off — whether or not he needs another lawnmower). Thrift hasn’t disappeared; it just mutated into the endless search for cheaper stuff.

This search has had many savagely negative effects: it has persuaded manufacturers to set price, rather than quality or service, as the single prime necessity. It no longer matters that something lasts, or does what it was supposed to for longer than it takes to unwrap it, as long as it was cheaper than the competition. This means that things can no longer be fixed, only thrown away, and the next cheap thing bought in its stead. It has driven down wages, and led to the globalized search for an ever cheaper work force. It has led to a world in which advertising tells greater and greater lies. It has led to a world in which predatory discounters routinely drive smaller businesses into bankruptcy, devastating small towns everywhere. It rewards scale. It led to Wal-Mart, the world’s largest retailer, and arch pusher of vast amounts of Adam Smith’s unnecessary things.

Much has been made recently of Wal-Mart’s plans to reduce its environmental impact, and to enforce environmental and social standards on the millions of suppliers that fill its stores. Wal-Mart has switched to environmentally benign light bulbs in its stores. Its trucks are no longer kept idling while their drivers take a lunch break. But meanwhile, Wal-Mart still keeps its prices as low as possible. It works this way: a factory in a small town, say Winchester, Virginia, makes, say, rubber goods. Call it, oh, Rubbermaid for short. It is a good-sized firm, and it has always operated in a socially responsibly way — it has a stable workforce, pays livable wages, makes products that endure, and sells a good many of them to Wal-Mart. By 1994, the company was doing so well that it was voted the most-admired American company by Fortune magazine.

But a few years later, as Joe Bageant put it in Deer Hunting with Jesus, “North America’s largest plastic products company was a foundering corporation, brought down by the boys from Benton, Arkansas… In 2001, Wal-Mart’s executive management team heavied up on Rubbermaid, demanding ridiculously low prices despite an 80 per cent increase in the cost of raw materials, and personal pleas from Rubbermaid CEO Joseph Galli. Galli begged. Wal-Mart stood firm. Later, when Rubbermaid refused to go along with Wal-Mart’s utterly unworkable price, Wal-Mart dropped the hammer. It pulled Rubbermaid products off the shelves, replacing them with knockoffs… After seeing its sales drop 30 per cent, Rubbermaid caved.” Rubbermaid shut down 69 of its 400 facilities, fired eleven thousand workers and planned to shift half its production to what it delicately called “low-cost countries.” Five years later, Rubbermaid’s profit was up — net income of $108 million. But the workers were still out of work, and the town devastated. “The fact that stock rises — and its owners along with it — in the wake of mass firings says more about what corporations consider an asset than a million mealy-mouthed Human Resources brochures and Wal-Mart smocks,” as Laura Penny so trenchantly put it.

What is gained? It is easier to see what is lost. Workmanship and product integrity are lost. Paying jobs are lost, and workers who feel good about themselves and where they work. A good corporate citizen is lost, and with it a tax base for another small town. In a larger sense, a culture that understood standards, workmanship, and the value of craft is degraded, along with the sturdy but apparently obsolete capitalist notion that competition leads to stronger, more highly evolved industries through the process of “creative destruction.” Instead, we get price wars and the relentless erosion of standards. We get big box stores with no roots and no conscience. We get the commodification of jobs that has ravaged the middle class.

So ask again, who benefits? Here’s the answer: when Caterpillar moved its operations to right-to-work (i.e. anti-union) states with low wages, its employees could no longer afford to buy houses or send their kids to college, but the company’s profit jumped, in 2006, by more than 70 per cent, and the CEO got more than $14 million in what is laughingly called “compensation.” You can call it compensation, if you like. I call it swindling.

So what happens when we stop shopping?

This is the great conundrum. The economy is built on consumption and the early obsolescence of things provide jobs, and keep the economy ticking over. How do you manage a transition, if people stop spending? Before, you could always rely on technological advance. People could stop buying buggies, and the buggy manufacturers went out of business, but people bought cars instead, and car makers prospered. But what happens if they stop buying something — and buy nothing to replace it? If men stopped shaving, thousands of workers would be laid off, because their jobs are to make razors and razor blades and batteries for shavers, and shaving cream and lotions, and devising marketing campaigns for shaving systems. This dilemma is replicated in every industry, in every town, in every region, in every country. Andrew Revkin, The New York Times’s wise ecology correspondent, pondered the question not long ago, though he put it this way: How do you grow an economy without the jobs and the taxes that these unnecessary things produce? And he added: “The market, unfortunately, does not differentiate between good and bad. If the people want junk, the market will provide. So we have to fall back on the conscience of our business leaders.” In which he was surely being sardonic.

But in Revkin’s question lie the seeds of an answer. He asked, how do you grow an economy without the taxes and jobs… ? The beginning of the answer surely is, don’t grow. As Tim Jackson puts it, “consuming less may be the single biggest thing you can do to save carbon emissions, and yet no one dares to mention it. Because if we did, it would threaten economic growth, the very thing that is causing the problem in the first place.”

Marq de Villiers is an award-winning writer of books and articles on exploration, history, politics, and travel. He is also a graduate of the London School of Economics, and his latest book puts his training in economics to good use. Our Way Out: Principles for a Post-Apocalyptic World offers a refreshing menu of economic options for an overly consumptive population living on an environmentally stressed planet. 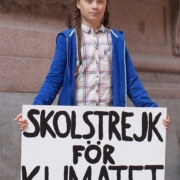 Selecting “Surrogate Species” for Conservation: How About an 800-Pounder?
4 replies

The Heroic Works of Jerry Mander