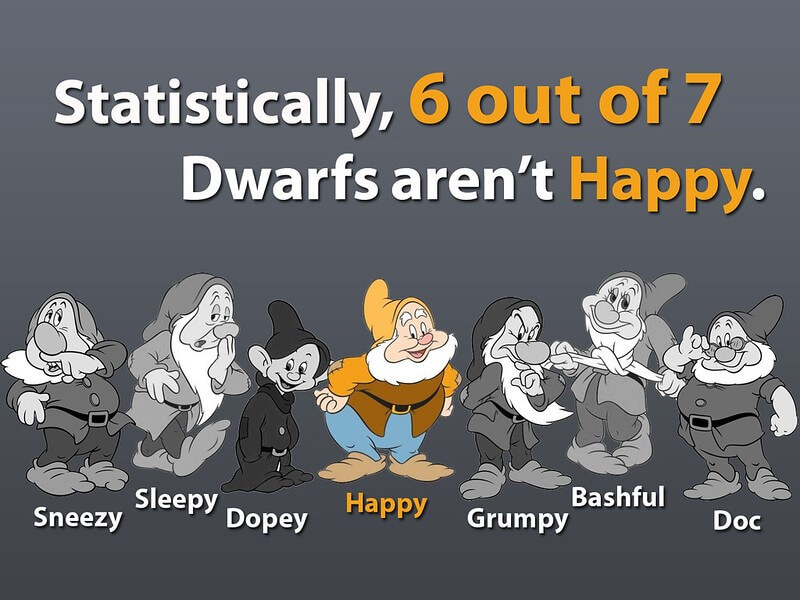 General wellbeing is in short supply, too. Why? (CC by 2.0, Andrew Tarvin)

Several movements are working in opposition to the destructive growth economy of the 21st century. The labels adopted by these movements are largely tied to the regions in which they originated and/or became popular. For example, the term “steady state” is most prevalent in the USA, while “degrowth” is often associated with continental Europe. The widespread term throughout the UK, however, is “wellbeing economy.”

Without prior knowledge of the UK term, it initially sounds like a fundamentally good thing. Who wouldn’t want an economy centered on wellbeing? Wouldn’t it be great if the economy—that boring, dreary thing portrayed as numbers, percentages, and projections on the news—could be altered to make us well, and even happy?

The term “wellbeing economy” sounds utopian, but the ideology has its shortcomings. Steady statesmen and wellbeing advocates concur that economic growth no longer serves our interests. The salient difference lies in the approaches to the problem of growth.

Steady statesmanship is all about stabilizing the size of the economy, plus managing the most important variables that go along with stabilized size. In moving toward a steady state economy, population must be stabilized, inequality must be reduced, conservation must be practiced, and greenhouse gas emissions must be substantially curbed. Steady staters are most adamant about one thing: GDP growth is the biggest problem and it must stop, preferably in a democratically managed way.

The wellbeing economy, in contrast, emphasizes the pursuit of—you guessed it—wellbeing. There are some differences among wellbeing economy groups, but all of them share a focus on human wellbeing and happiness. The size of the economy is seldom emphasized and often overlooked, as if ignoring the problem of a bloating economy might make it go away while we instead focus on wellbeing.

The Problem of the Wellbeing Economy

Nicola Sturgeon, First Minister of Scotland, gave a TED talk in 2019 titled, “Why governments should prioritize well-being,” in which she expressed concerns about the use of GDP as a metric for measuring government performance because it “measures the output of all of our work, but it says nothing about the nature of that work, about whether that work is worthwhile or fulfilling.”

Sturgeon further expressed that the current wealth of many nations is more than enough, and even acknowledged some of the environmental impacts of growth. Yet she failed to condemn GDP growth—growing population × per capita consumption—as the root of the problem. Instead, Sturgeon emphasized that we simply need to expand our measurement of success beyond GDP growth so that it considers human and planetary wellbeing as well. Only then will we have a holistic approach to measuring a nation’s success. GDP growth, by these standards, is acceptable so long as it can somehow—despite all the devastating evidence to the contrary—be reconciled with increasing happiness in the aggregate.

The problem with Sturgeon’s approach, then, is that if we focus exclusively on wellbeing and neglect the ecological limits of the planet, we conclude that economic growth is not especially malevolent, but rather merely unnecessary. Growth then becomes a goal we needn’t pursue but needn’t do much about curbing either.

Yet the environment is the very foundation of wellbeing, not an optional issue for occasional lip service. Therefore, the rhetoric of “wellbeing economy” is problematic. It allows politicians to appear more progressive than they really are. Tossing around the phrase “wellbeing” becomes an exercise in political points-scoring. Even an actual focus on wellbeing, while it might help demonstrate the weakness of GDP as an indicator of success, stops short of emphasizing that GDP growth has become positively destructive.

First Minister Sturgeon deserves credit for starting a conversation on whether growth is as desirable as many assume. That is more than we can say for Boris Johnson’s UK government. However, unless politicians begin to talk about the causal links between GDP growth and our environmental and social crises, they can only hope to place some hairline fractures in the giant pedestal upon which economic growth currently sits.

Many people have long believed that they would be happier if they had more money. In his 1974 paper Does Happiness Improve the Human Lot, Richard Easterlin found that rich Americans were indeed happier than poor Americans. Easterlin hypothesized that this might be due to the reduced weight of anxiety when we have financial security. However, he found no correlation between a nation’s wealth and the happiness of its citizens. As a nation’s GDP grows, its citizens remain about as happy (or unhappy) as they were before. In other words, it is not the size of the pie that matters, but the size of your individual slice compared to your neighbor’s.

This is clearly an argument for a more equitable distribution of wealth. However, it also shows that a reliance on economic growth to advance our wellbeing is poor strategy (no pun intended). This leads to questions about what the priorities of governance should be. To strive so consistently—and so vehemently—to grow GDP is madness if it does not serve our interests. Nonetheless, the evidence suggests that, up to a point, having more money does make us happier.

There are many things money can’t buy that contribute profoundly to our wellbeing, things the coronavirus pandemic has taught us not to take for granted. The ability to see our families, friends, and loved ones; access to nature; the freedom to go wherever we want—these things are literally priceless.

The Easterlin Paradox reveals the impossibility of a successful wellbeing economy that doesn’t curb GDP. If happiness is the goal, growth is the antithesis because in order for us to maintain access to those priceless things that bring us joy and wellbeing, GDP must recede to accommodate ecological limits.

Scottish First Minister Nicola Sturgeon is not the only world leader on the stated path towards “wellbeing.” The Scottish, Icelandic, and New Zealand governments formed a network in 2018 called the Wellbeing Economy Governments Group. In 2019, New Zealand became the first country in the world to release a “wellbeing budget,” targeting improvements to mental health support and lifting people out of poverty. Prime Minister Jacinda Ardern also adopted the Happiness Index as a replacement for GDP as the key indicator of government performance. 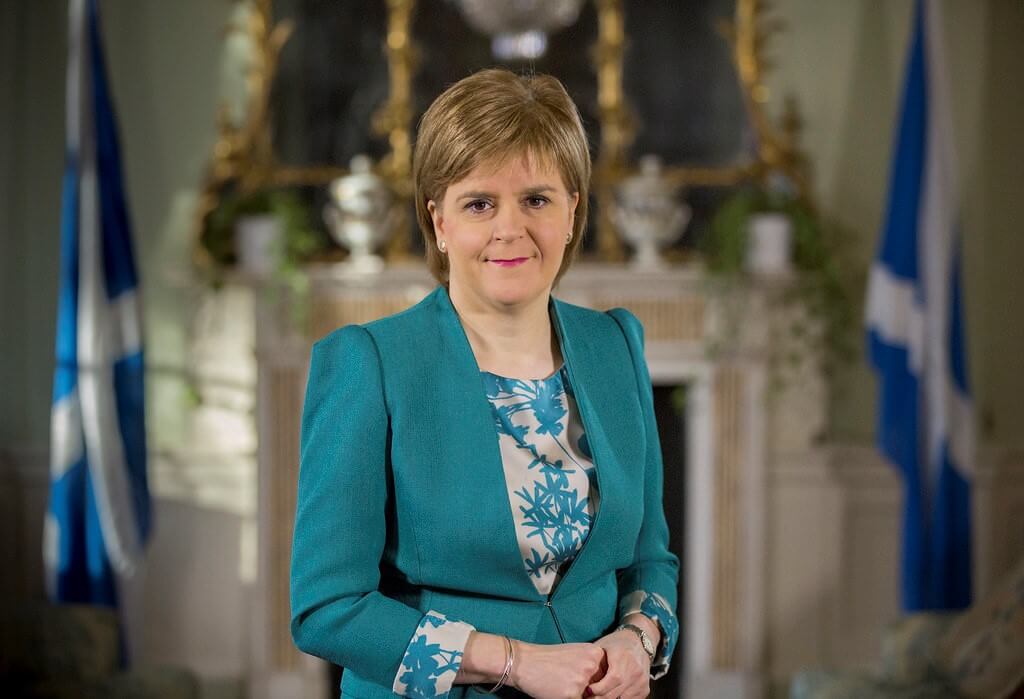 Ardern’s Icelandic counterpart Katrin Jakobsdottir followed, emphasizing the need for more indicators in response to the environmental devastation her country is facing.

While these ideas seem rather novel in the Western Hemisphere, the small Asian nation of Bhutan replaced GDP growth as a primary goal years ago. In 1972, Bhutan’s fourth king, King Jigme Singye Wangchuck, declared, “Gross National Happiness is more important than Gross Domestic Product.” This led to the development of the Gross National Happiness (GNH) Index, a measurement tool based on nine domains—categories of holistic wellbeing including factors such as cultural and ecological diversity.

Yet, in spite of this, Bhutan continues to target economic growth in response to the coronavirus pandemic, and their carbon emissions are rising. In Iceland, despite Prime Minister Jakobsdottir’s rejection of GDP as the sole indicator of government performance, she has been reluctant to go further than having “an emphasis on wellbeing.” New Zealand’s economy grew by a staggering 14 percent in just one quarter last year, and the Scottish government plans to stimulate “inclusive growth,” defined as “growth that combines increased prosperity with greater equality, creates opportunities for all, and distributes the benefits of increased prosperity fairly.”

Are we not more prosperous when our air is cleaner, our ecosystems more biodiverse, and our climate more stable? Of course we are. Those countries muddling towards a wellbeing economy are certainly ahead of those blindly pursuing growth at all costs. However, until they recognize the absolute threat that continued GDP growth poses to our wellbeing, they have not come far enough.

The steady state economy is a viable policy for taking on that threat, and “steady state economy”—or even “degrowth toward a steady state economy”—is the right rhetoric for advancing steady-state policy. A “wellbeing economy” won’t happen if growth is ignored; rather, growth must be tackled intentionally, explicitly, and strategically. If it’s not, our collective wellbeing will go up in the smoke of so many pipe dreams.

Why Do So Many People Believe in the Fantasy of Infinite Growth on a Finite Planet?
5 replies