The past century’s foolish management of water would not have happened in a steady state economy. But today’s globalized, growth-obsessed economy allows, and even subsidizes, construction firms and power companies to profit by destroying significant water resources that are critical for people’s survival.

Water wars are on the horizon, as massive river engineering schemes, especially in China and Brazil, seek to control the world’s big river basins. International Rivers, a nonprofit organization, has examined the viral spread of dams and water diversions and the harm they cause.

Nation after nation has externalized the costs associated with reckless use of water (a form of cheater economics), and this recklessness increases the likelihood of shortages and ensuing conflicts. Worry about water wars is not exaggerated! In June the front page of the Washington Post carried this headline: “Egypt frets, fumes over Ethiopia’s Nile plan.” The cause of the problem: a giant dam Ethiopia is building (with foreign aid) on the Blue Nile that will remove water historically flowing through Egypt and into the Mediterranean Sea. The article describes the potential for turmoil: “Egyptian military commanders may decide that ‘it is better to die in battle than to die of thirst’.”

Turkey has built massive dams on the Tigris and Euphrates Rivers, with the result that water flowing from 2003-2009 to Iraq was cut by 80% and to Syria by 40%. Strong evidence supports the contention that Syria’s ongoing civil war sprang from the massive drought that hit in 2006. As tens of thousands of farmers fled to cities to survive, chronic unrest and grievances intensified to the breaking point. Now over 80,000 people have died, billions of dollars have been spent on the war, and still there is no end in sight.

In contrast to a global economy with its head in the sand, a true cost, steady state economy would approach water issues in an entirely different manner. Guiding principles for this economy include:

One might mistakenly think that international institutions like the World Bank would promote such sound principles and discourage nations and other institutions from investing in conflict-instigating projects that destroy local food and water resources. However, so outrageous is the World Bank’s new big dam policy that a group of 80 organization leaders and water experts sent a letter of protest to World Bank President Jim Yong Kim. 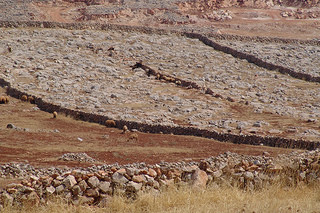 Parched landscapes like this one in Syria can cause increasing tension. Photo by Charles Roffey.

The World Bank’s recent action in support of the proposed $40 billion gigantic Inga 3 Dam in the Democratic Republic of the Congo (DRC) violates most of the above principles. In a nation like the DRC where less than 10% of the population has electricity, the International Energy Agency has pointed out that the unelectrified areas are best served by mini-grids and off-grid solutions. So much for the goal of poverty reduction where your prime beneficiaries are transnational mining operations!

Will water wars erupt in Asia’s Mekong River Basin, which is shared by ten nations? Major dams planned for the Mekong could destroy the world’s largest inland fishery (relied on by 60 million people), as well as degrade Vietnam’s large rice-growing habitat in the Mekong delta. The great fish legacy is about to be sacrificed to the god of hydropower as new dam building on the mainstem of the river will block out the migratory spawning runs of some 200 species of fish.

River-destroying actions like these are welcome in today’s global economy, but they would never be tolerated in a true cost, sustainable economy. Such an economy would instead select waterless energy solutions in light of growing water shortages and expanding population. Besides being water-free, sources of energy like wind and rooftop solar are better suited to serve poorer communities where there is little hope of stringing enough power lines from big centralized dams or coal plants to reach anything but a fraction of villages.

Now is the time for an energy transition from big dams and other unsustainable projects to decentralized projects that can meet local needs while conserving natural resources. But this transition will only happen if we get to work on a parallel transition: from the globalized, growth-obsessed cheater economy to a sustainable and fair steady state economy.

Tensions in Ukraine: A Scramble for Growth?
1 reply

Too Many Jobs
Scroll to top
$