The economic process is not a mechanical analog that can be run forward and backward, nor a circular process that can return to any previous state. Rather it is an irreversible and irrevocable process moving in the direction of time’s arrow of increasing entropy.[1] Finitude and entropy guarantee that the economic life of our species will be a journey of no return. Therefore even a stationary economy, in the classical sense of constant population and constant capital stock, is ultimately a journey of no return, because the metabolic throughput of matter and energy required to maintain constant stocks of people and physical capital, in the face of depreciation and death, is an entropic flow from ever less concentrated sources to ever filling sinks—and both sources and sinks are finite.

Consequently, technology must change qualitatively to adapt to entropy increase, to depletion and pollution of the environment, even in the stationary, or “steady state economy” as it has been more recently called. Relative to the growth economy, the steady state economy is a slower journey of no return, one that values longevity with sufficiency, and seeks qualitative improvement rather than quantitative increase. The many advantages of a slower journey were emphasized by John Stuart Mill [2], the champion of the classical stationary state:

“I know not why it should be a matter of congratulation that persons who are already richer than anyone needs to be, should have doubled their means of consuming things which give little or no pleasure except as representative of wealth….”

“The density of population necessary to enable mankind to obtain in the greatest degree, all the advantages both of cooperation and of social intercourse, has, in all the most populous countries been attained….”

“It is scarcely necessary to remark that a stationary condition of capital and population implies no stationary state of human improvement. There would be as much scope as ever for all kinds of mental culture, and moral and social progress; as much room for improving the Art of Living and much more likelihood of its being improved, when minds cease to be engrossed by the art of getting on.”

The Darvaza gas crater in Turkmenistan was created when Soviet engineers were drilling for oil and hit a natural gas pocket that swallowed their equipment and has been burning ever since. (CC BY-SA 2.0, Tormod Sandtorv)

In contrast to Mill’s vision of the steady state, the reality of today’s growthist economy is one of harried drivenness, of frantic adaptation to the unforeseen, unwilled, and out of control consequences of maximized, subsidized growth, pushed by ever larger scale and more dangerous technologies. Such growth is now threatening the capacity of earth to support life, and certainly healthy lives.

Many are not content with a slower, more careful journey of no return. They want a so-called “circular economy” that can presumably live, and continue to grow, by ingesting only its own waste products. They assume that what they consider desirable must therefore be possible.

For anyone who has taken the first course in economics, the recently revived term “circular economy” calls to mind the famous diagram of the circular flow of exchange value between firms and households found in the first pages of the standard textbooks. That diagram shows goods and factors of production flowing in a closed circle between firms and households, with money flowing in the opposite direction.

In the diagram, the economy is represented as an isolated system—nothing enters from the outside, nothing exits to the outside. There are no natural resources entering from the ecosphere, no wastes exiting back to the ecosphere. Indeed there is no ecosphere, no containing and constraining environment of any kind. This abstract vision is useful for studying exchange (supply, demand, prices, and national income), but worthless for studying environmental costs of economic growth because there is no finite environment to constrain growth.

This picture however is not what most advocates today mean by “circular economy”, but it has a similar name of long standing, and is a source of confusion. By “circular economy” they mean an economy that recycles material natural resources to a high degree, increases product lifetimes, and uses mainly renewable resources—all good policies, but destined to fall short of their goal of “sustainable growth”. It might better have been called a “recycling economy” or an economy that maximizes natural resource productivity rather than labor or capital productivity.

Increased resource efficiency is also referred to as “decoupling” as in disconnecting the output of goods and services from the throughput of resources. A totally “decoupled economy” would take us back to the neoclassical circular flow representation of the economy as an isolated system. For this reason, I prefer to avoid this reborn notion of “circular economy” and the related term “decoupling”, because they greatly overstate the degree of separability of production from resource throughput, further encouraging the unrealistic quest for “sustainable growth” in physical scale of the economic subsystem relative to the biosphere. 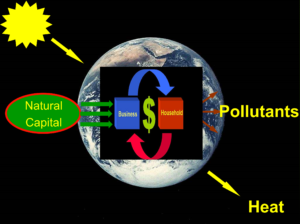 The heavy emphasis on circularity casts a deep shadow over the more basic fact that the metabolic throughput is fundamentally a linear, one-way entropic flow. Yes, the overall linear flow can contain important countercurrents and reverse eddies of recycling, and it is important to take advantage of that. But the river itself flows from the mountains to the sea, and never backwards. True, the hydrologic cycle powered by the sun can evaporate the water to rain again in the mountains, but that happens in the ecosphere, outside the economy.

If the “circular economy” relies on natural biophysical cycles powered by the sun, and does not grow in scale beyond the regenerative and absorptive capacities of the containing biosphere, then it approximates a steady state economy—not a sustainable growth economy. In addition to a circulatory subsystem (recognized since the Physiocrats’ analogy with blood circulation), the economy also has a digestive tract that ties it to its environment at both ends. That second, more basic metabolic analogy has been neglected in economic theory.

Similarly neglected is what Brian Czech called the “trophic structure” of the economy in his book Supply Shock [3]. In the study of ecology, “trophic” refers to the energy flows associated with ingestion, digestion, and the growth of organisms. Primary producers (plants) are distinguished from primary consumers (herbivores) and secondary consumers (omnivores and predators). These are the three basic trophic levels comprising an ecosystem. Without the primary producers, there is no economy of nature, and the same principle applies to the human economy. Without agricultural surplus, no manufacturing or service sectors arise, and a growing economy requires more agricultural and extractive surplus at the base. This trophic reality supplements the fundamentals of throughput and helps demonstrate the folly of “decoupling.”

Meanwhile, recycling is limited, first because it costs energy to carry out the recycle of materials; and second because energy itself is not subject to recycling (entropy means that it always takes more energy to effect the recycle than the amount of energy recycled—regardless of the price of energy). The extra energy for the recycling also requires material instruments, trucks, etc. So materials can be reduced, but at the cost of an increase in energy (and material) throughput, which after some number of cycles (how many?) becomes prohibitive, as remaining materials are ever more dispersed. Even expensive metals like gold, silver, and copper are currently only about one-third recycled and two-thirds newly depleted. Writers who expound the circular economy seem to be aware of this fact, but do not give it sufficient emphasis.

It is also important to distinguish prompt materials recycling that is internal to the economic subsystem from long-run, external recycling through the containing ecosphere. While increased reliance on renewable resources is a good feature of the “circular economy”, one must remember that, when exploited beyond sustainable yield, renewable resources effectively become nonrenewable. There is always a scale limit to a sustainable economic subsystem, beyond which growth, even in a “circular” economy, breaks down, and sustainability requires a steady state economy.

The basic issue of limits to growth that the Club of Rome did so much to emphasize in the early 1970s needs to remain front and center, with recycling considered as a useful accommodation to that limit, but not a path by which the growth economy can continue. Well before becoming physically impossible, the growth of the economic subsystem becomes uneconomic in the sense that it costs more in terms of sacrificed ecosystem services than it is worth in terms of extra production.

That richer is better than poorer is a truism. No dispute there. But is growth in GDP in wealthy countries really making us richer by any inclusive measure of wealth? That is the question. I think it is likely making us poorer by increasing unmeasured “illth” faster than measured wealth. Even a steady state economy can be too big relative to the ecosphere.  The neoclassical circular flow picture can never be too big by virtue of its being an isolated system.

Inevitably, national growth economies reach a point where many citizens begin to suspect that growth is no longer worth the cost of excessively rapid adaptation to an accelerating economy of no return—that so-called economic growth has in reality become uneconomic growth. John Stuart Mill recognized that long ago. Why have not more recognized it? Why is growth still the summum bonum of economists and politicians? Probably because growth is our substitute for sharing as a cure for poverty. And because our national accounts (GDP) are incapable of even registering uneconomic growth because they count only value added by labor and capital, and omit entirely the cost of using up that to which value is added, namely the entropic flow of natural resources, the very sap of life and wealth.

Who Does Economic Growth Serve?
6 replies

The One Percent: Not Kristallnacht but Lebensraum
Scroll to top
$