Ask Americans what the Green New Deal is all about, and you’ll get two basic answers. Most often you’ll hear, “It’s about moving to renewable energy in order to fight climate change.” You’ll also hear, from a camp further right, “It’s all about socialism!”

Either way, the really green, really new feature is overlooked. What the Green New Deal is really about is the transition to a steady state economy. At least, that’s what it must be about, to be truly green and new. 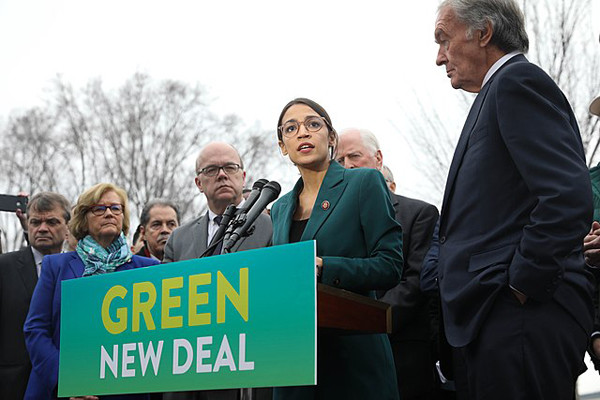 Let’s start with green. “Green” connotes environmental protection. Some may view it naively as a tree hugger’s agenda, but ultimately, it’s about economic sustainability. That’s because economic activity starts from deep in the environment; namely with the agricultural and extractive sectors such as logging, fishing, and ranching. Only with agricultural and extractive surplus can we free the hands for the division of labor into manufacturing and service sectors. (Anyone thinking otherwise may kindly skip their meals until acquiring the necessary common sense.)

Now let’s take a closer look at the point that agricultural surplus—and therefore the rest of the economy—requires the green deal of environmental protection. Agricultural surplus takes soil, water, a stable climate, and plenty of space. If, for the sake of GDP growth, we use too much of that space and water for other activities, remove or erode the soil in the process, or destabilize the climate, the agricultural sector will decline. The rest of the economy will decline right along with it. “Down will come baby, cradle and all.”

In other words, the reckless pursuit—or even the systematic pursuit—of GDP growth will backfire like a canon plugged with cement. And that is exactly what is happening, albeit in slow motion (so far). Exceptions notwithstanding, soils are eroding, water supplies are dwindling, climate is destabilizing, and too much space is being robbed from the agricultural sector. This is the opposite of environmental protection, agricultural productivity, and economic sustainability. It’s the opposite of green.

So, we need environmental protection badly, and we need to pursue it quickly, if not for the sake of nature, then for the sake of the economy. We need the green in the Green New Deal. But no one should think that simply transitioning to renewable fuels will accomplish greenness. Not by a long shot. We are already committed to a “brown” 21st century and beyond. Loading up the atmosphere with greenhouse gases (and many other pollutants) has set us up for long-term ecological unravelling. Wholesale habitat disintegration, species extinction, unhealthy forests, shifting agricultural zones, and evolutionary chaos will take centuries and possibly millennia to sort out.

Not that anything resembling today’s “normal” will return. Polar bears will be gone, along with many other canaries in the coal mines. Half of Florida will be under saltwater, while the fresh waters of the Ogallala Aquifer will be depleted. Climate suitable for a wheat belt will be far north of the current American and Eurasian breadbaskets. There’s no guarantee the earth will retain a wheat belt or any type of grain belt.

The best hope for future centuries is that a new balance of nature—and a new economic equilibrium—is reached, and reached in a process that doesn’t starve, infect, or otherwise decimate billions of souls.

Now, let’s consider the more immediate prospects for us, our kids, and our grandkids in the 21st century. Even if we are able to rapidly replace fossil fuels with renewables pursuant to the Green New Deal, the type of fuel we use is only one side of the coin. We also have to think about what we are fueling. Here’s a short list:

If we want to fuel the current, $19 trillion American economy or the $87 trillion global economy with renewables, we’ll be filling up vast landscapes with solar panels, windmills, wave power devices, and the ridiculous amount of infrastructure required to transport power from such widespread, low-intensity energy harvesters to the farms, factories, retail outlets, office facilities, entertainment complexes, and landfills where economic activities transpire.

But then, where will the farms, factories, retail outlets, office facilities, entertainment complexes, and landfills go? And what happens to our national parks, forests, and wildlife refuges? Don’t forget about housing, military bases, and the halls and monuments of government and civics. It is not as if there is some overlooked abundance of land just waiting for a manifest destiny of economic activity.

Now imagine growing the amount of economic activity, let’s say at the typical American goal of 3% per year. All else equal, in 23 years we’ll need double the space. How green is that?

So we’ve figured out what is really “green” in the Green New Deal (recognizing that “very green” is no longer an option). Green is all about protecting the environment, and therefore the economy, by moving away from fossil fuels and by limiting the scope of economic activity. In the process we’ve also identified what is truly “new,” and it’s certainly not renewable energy.

For millennia before the industrial revolution, farmers, millers, and manufacturers used nothing but solar, wind, and hydro power. The use of renewable energy is ancient; quite the opposite of new. The really new thing about the Green New Deal, then, is the same thing that makes it relatively green; that is, stable size.

Of course, as with greenness, all is relative in the case of newness. Homo sapiens has roamed the Earth for approximately 300 millennia, and the global economy was largely stable for approximately 299.7 of them. Then—with the dawn of the nation state, mercantilism, capitalism, and the industrial revolution—the human economy grew far faster than before. Growth solved more problems than it caused during the early stages, too, as described by classical economists such as Adam Smith and David Ricardo. Yet the vast majority of human experience is with non-growing (or imperceptibly slow-growing) economies.

Although steady state economics is not new to the human experience, the policy goal of a steady state economy is. Prior to the nation state, there were no macroeconomic policies. Then the study of economics commenced, with a focus on the wealth of nations in the 19th century, and by the mid-20th century, practically every nation on Earth had adopted the goal of GDP growth, as did far-reaching international institutions such as the World Bank and the United Nations. Therefore, in terms of modern economic policy, the steady state economy is brand spanking new.

It is a game-changing goal for Democrats and Republicans, and quite the opportunity for leadership. When Republicans stand in the way of steady state economics, progressive Democrats can say (ironically), “We are the real conserv-atives. We start by conserving resources, and we conserve our ways of life with the steady state economy. True conservatives will vote for us.”

Conversely, if Democrats are hellbent on GDP growth, Republicans looking for a political facelift can say, “Those liberals think we can have our cake and eat it too. Conservative policy means steady-state spending, not perpetual growth of debt, deficits, or even GDP. We’re returning to our Rooseveltian roots and taking back the mantle of conserv-ation.”

Then there is the Green Party, which jumps to mind by virtue of the capitalized “Green” in their title. They are the only party, thus far, with a steady-state plank, too. The problem is, the Green Party has become something of a Pink with Blue Polka Dots Party, running far left on every issue that arises. Boxing itself into a smaller and more irrelevant corner is no way to prioritize green.

All things considered, Democrats have a big jump on steady statesmanship by advancing the Green New Deal. To the extent they emphasize the steady state economy, they’ll gain converts quickly from the ranks of the Green Party and sustainability-minded Independents. I can testify to that, as a registered Independent and the ex-Green Party activist who drafted the steady-state plank in 2004. I’ll be joining the Democratic Party to help with the macroeconomics of the Green New Deal.

A steady-state Green New Deal will also attract the true-conservative Republicans who haven’t seen enough attention paid to… conserving! I can testify somewhat to that as well; long ago I belonged to Republicans for Environmental Protection (known today as ConservAmerica). 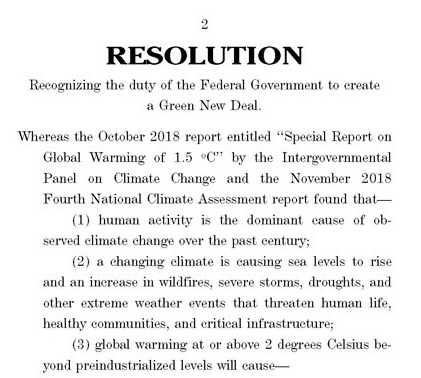 An excerpt from House Resolution 109, submitted to the 116th Congress of the United States on Feb 7, 2019 by Representative Alexandria Ocasio-Cortez (D-NY), which calls for the creation of a Green New Deal.

Regardless of current political party, bona fide steady staters (such as the 14,000+ signatories at www.steadystate.org), as well as members of the many organizations that have developed similar positions (for example, the U.S. Society for Ecological Economics) are constantly searching for a political home; a steady-state political home. Much the same may be said for those with latent steady-state leanings (essentially all those concerned with the build-up of environmental impact and the erosion of ecological integrity). A Green New Deal replete with steady state economics is long overdue and a breath of fresh air.

Numerous details must be worked out for infusing the Green New Deal with steady state economics, such as a workable timeframe for establishing a steady state economy, amending the Full Employment and Balanced Growth Act (with a Full and Sustainable Employment Act), and “steady statesmanship” in international diplomacy. Yet dozens of books, hundreds of university courses, and thousands of journal articles have already paved the way for such policy reforms. In fact, more policy work has already been done for the steady state economy than for the wholesale replacement of fossil fuels.

The agenda of the Green New Deal—its emphases, themes, and particulars—is still being ironed out. Politicians, policy wonks, and academicians are wrestling over turf. Some want credit for coining phrases, some want your vote, some want research funding, and some simply want to protect the environment and therefore the economy.

In the midst of it all, you can help with the ironing out. If anyone asks you about the Green New Deal, just say, “The Green New Deal? Why it’s all about the steady state economy. That’s assuming you want it to be really green, and really new.”

Brian Czech is the founder and executive director of the Center for the Advancement of the Steady State Economy. He is the author of three books, as well as more than 50 academic journal articles. He served as a conservation biologist in the headquarters of the U.S. Fish and Wildlife Service from 1999-2017 and as a visiting professor of natural resource economics in Virginia Tech’s National Capitol Region.

IPCC Report: Happily Ever After or Miserable Ever More?

A Country of Immigrants

A Journey of No Return, Not a Circular Economy
Scroll to top
$