Our current U.S. economy routinely lets polluters off the hook and even rewards them with subsidies, and the same is generally true for the global economy. During the past twelve months, water pollution has gone from bad to worse as exploding rail freight trains loaded with tar sands oil have caught on fire, causing derailments and spilling contaminants into rivers.

Reports from the Pacific coast, from California to Alaska, are disturbing because they indicate that some fisheries and shell fisheries may be on the tipping point of collapse. Worldwide, we are seeing industrial civilization screw up clean water through nutrient loading from gigantic crop monocultures and animal factory slums. It’s a recipe for catastrophe. Several dead zones at the mouths of great rivers like the Mississippi have gained notoriety, but the public is not aware that there are now hundreds of such zones worldwide. 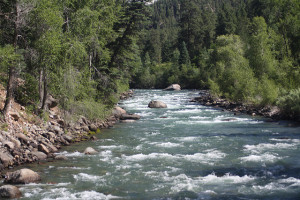 The Animas River before the toxic metals of the Gold King Mine spill turned it bright orange. Photo Credit: Schatzl and Pickles.

The latest water pollution debacle occurred just this month (August 2015) in the Colorado Rockies. A state of emergency was declared as the Animas River turned orange when millions of gallons of toxic heavy metals and carcinogens from the Gold King Mine spilled and created a hazardous mess at the very peak of summer recreation.

Recreation in this part of Colorado is a crucial component of the economy. One river outfitter has had to lay off over twenty employees. Agencies have allowed the leakage at gold mines like the Gold King Mine to persist for years without being cleaned up.

These accidents would be far less likely to occur in a sustainable steady state economy. A steady state economy would not incentivize pollution. It would not allow externalization of pollution and health costs, and it would eliminate subsidies for extraction of hardrock minerals and fossil fuels. Globally, an estimated $600 billion per year in subsidies is provided annually to the fossil fuels industry, in contrast to $100 billion for wind, solar, and other renewable energies.

A sustainable economy would place genuine value on the many benefits provided by clean water and free flowing rivers, including diverse fisheries, a variety of recreation activities, beautiful scenery, and a healthy water supply. The global economy looks upon water more as a commodity, and trade agreements attempt to facilitate the privatization of water. A sustainable true-cost economy, on the other hand, does not externalize pollution impacts or exclude from economic calculation the numerous but less tangible benefits obtained from free-flowing rivers.

A sustainable true-cost economy holds so much promise, but the immense challenge of transitioning to such an economy can seem daunting. Tackling our water pollution crisis illuminates some highly actionable steps we could take immediately to start making a steady state economy a reality.

The Securities and Exchange Commission (SEC) could take an initial step toward a true-cost economy by requiring the many companies reporting to it to disclose their pollution impacts (externalities). Impossible you say? A few years ago it seemed impossible to get the SEC to require disclosure of CEO salaries. But guess what? It just happened—thanks to leadership by Senator Elizabeth Warren (D-Mass) along with tremendous grassroots pressure.

The SEC will now require publicly-owned corporations to disclose how much their CEOs make compared with the median wage of their workers. The Washington Post reported that the pay gap between executives and unskilled workers is about 300 to 1, not 30 to 1 as most Americans think. This precedent-setting action by the SEC should be followed by other campaigns directed at the SEC, starting with action on externalities.

In a true-cost economy, the price tag for goods and services that cause serious damage to life support systems would be so high that such products would not be produced. We would do well to recall that there is no economy on a dead planet. Critics who say that civilizations are nowhere close to causing ecosystem collapses do not consider the scientific evidence on planetary boundaries, nor the lessons from past collapses of societies. I think we should seize on the outrage over all the water pollution disasters in 2014 and 2015 and push for new economic structures that will provide long-term solutions.

Where is Pope Francis on Economic Growth?
Scroll to top
$