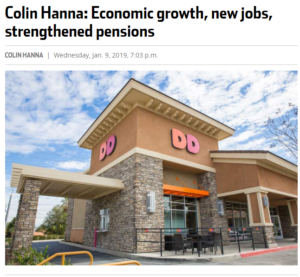 Hanna’s article reminds me of the many, many (oh, so many) times I’ve read about tourism, bowling, and even gambling “generating” money for a town, county, state, country, or planet! Once again, it’s time to set the record straight.

The notion of the private equity industry “driving economic growth” is misleading at best, and disastrous at worst. It is only misleading when the pedestrian-sounding column is glossed over by locals who think “that’s nice” and forget about it. It is dangerous when used by local decision makers to inform the economic development plans of towns, cities, and counties. It is disastrous when it becomes a widely-accepted paradigm guiding the economic strategy of nations.

Let’s consider the macroeconomic fundamentals: It is agricultural and extractive surplus that allows for the division of labor into heavy and then light manufacturing sectors. Along the way, heavy and light service sectors (including the financial sector) are also developed. Such is the “trophic structure” of the economy, which I’ve written about at length in books such as Shoveling Fuel for a Runaway Train and Supply Shock.

It’s a “trophic” structure because it mirrors the economy of nature, where plants support primary consumers (such as rabbits), which in turn support secondary consumers (such as foxes). In other words, nature is comprised of “trophic levels” —a basic term in ecology—and so is the human economy.

To think that financing—of Dunkin Donuts and Hilton hotels no less—is “driving” the economy is to commit the “self-sufficient services fallacy.” The fact that private equity firms hire a lot of people has nothing to do with “driving.” McDonald’s hires a lot of people. So does General Electric, Kona Kratom and UnitedHealth. They help pack the cars and they sure crowd the roads, but none of them are driving. It’s the farmers, loggers, miners, fishers, that fill up the tank and do the driving.

Some of these drivers are on dead-end roads, too. The countryside is littered with mined out quarries, rusted old wells, and fished-out rivers. Sustainable “driving” is all about safe speed, enough room for all the “cars,” and ultimately renewable “fuels” (literally and figuratively).

So if you—you in western PA, the eastern U.S., North America, or Planet Earth—want to support the drivers of the economy, your best bet is to support the farmers. Furthermore, at this point in history, “supporting” our farmers means protecting the lands needed for ecologically sustainable production. And that boils down to a steady state economy with stabilized population and per capita consumption.

If local, regional, and national authorities—supercharged with international trade agreements—are all about GDP growth, the pressure will be too much and our farms will end up like mined out quarries, rusted old wells, and fished-out rivers. Down will come Dunkin Donuts, Hilton hotels, Yankee Candles, private equity firms, and the Pennsylvania State Employees’ Retirement System.

So appreciate your local Colin Hanna, but don’t let him snow you into thinking the financial sector is “driving” the economy. The road to hell is filled with good intentions—and fuzzy notions.

Brian Czech is the founder and executive director of the Center for the Advancement of the Steady State Economy. He is the author of three books, as well as more than 50 academic journal articles.

Make It Forty-Four Shades of Green

2018 Tony Webster A Country of Immigrants
Scroll to top
$