It is a luxury to be able to worry about future generations, biodiversity loss, or climate change, and it is only available to me because of a great deal of privilege. I don’t have to worry about affording food for my family, or finding a safe place to live, and I’m confident that my kids will inherit much of the same bourgeois life that I did. My privilege frees me to think, worry, and write about the environment, energy, and economic growth. However, in all this self-important thinking about the Anthropocene, it can be easy to forget that the USA, and the rest of the world, is already in severe political and environmental danger. It is easy to forget that the hellscape I worry about future generations inheriting is not dissimilar from the daily experience of billions of people currently living on Earth. 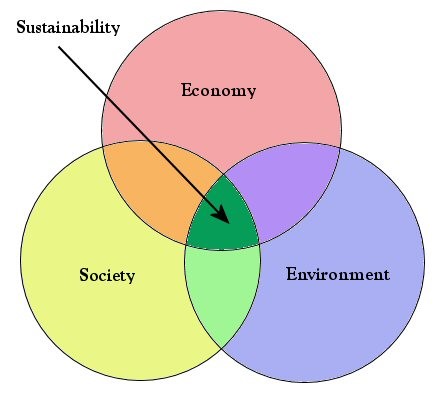 It’s time to rethink the sustainability Venn diagram. How do we ensure that social justice is not viewed as a third wheel? (Image: CC BY-SA 3.0, Credit: Sustainability Hub)

This critique about environmental concern—that it ignores the suffering of the present to replicate a prosperous life for the wealthy—is not new. However, the protests convulsing American cities should be a wakeup call for folks like me who tend to be more concerned about long-term sustainability than short-term justice. There are morally compelling issues of injustice happening right now, and any solution we propose to address long-term ecological crises must explicitly address these immediate issues as well.

Just as this critique of environmentalism isn’t new, neither is the observation that “sustainable” solutions must be socially just. Indeed, this linkage is often expressed as a Venn diagram of overlapping “social,” “environmental,” and “economic” circles. In my experience, those of us concerned about sustainability tend to focus on the economic and the environmental and minimize the importance of the social. The social circle is often seen as sort of a third wheel, something we should be mindful of, a side effect of a well-designed policy perhaps, but not the goal of sustainability. It feels tacked on.

No Sustainability Without Social Justice

However, building a socially just society is every bit as critical to sustainability as maintaining natural capital or ending overconsumption. A sustainable system requires social justice, but not just because it is in the Venn diagram. Without a socially just system of government and equitable treatment across race, gender, and class, we will not have a stable, sustainable socioeconomic system. 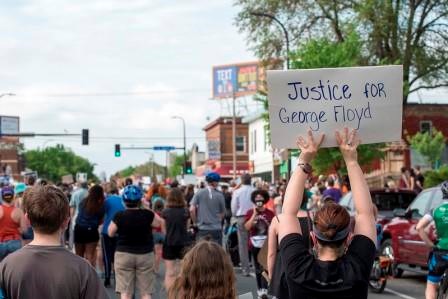 Imagine a steady state economy, but one in which some people are born into generational poverty or otherwise unable to provide meaningful, healthy lives for themselves. In such a world, this hereditary underclass will oppose the sociopolitical system and the policies that limit economic growth. From their perspective, the planet may be sustainable, but they remain impoverished and marginalized. Such an economic system will fail due to internal strife.

Thus, we should see the current protests for criminal justice and police reform as a core component of the movement toward a steady state economy because social justice is a prerequisite of sustainability. A common protest sign reads, “No Justice, No Peace.” We could modify that to read, “No Justice, No Sustainability,” and it would remain true. If we cannot figure out how to end racial discrimination, and particularly racial economic inequality, we will not build a sustainable environment. 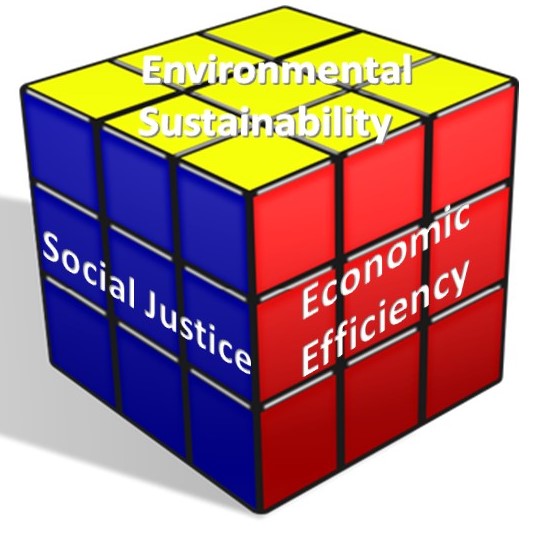 The steady state economy as a Rubik’s cube. All sides must be solved to achieve equality and sustainability. (Image: CC0 1.0, Source)

This is both good and bad news. It is bad news because those of us who are concerned about environmental sustainability must consider another universe of problems when one universe is already overwhelming. But it is also good news because it highlights the systemic, ethical nature of the problem. Perhaps getting the ethics right will solve problems in each universe.

We often get the impression from media and academics that we are just an innovation away from solving our environmental problems. Sometimes, we are told that if we increase renewable energy use our struggles will fade away; other times, carbon dioxide removal or geoengineering is the solution. While I do not intend to denigrate those ideas, they will not fix systemic environmental problems caused by economic activity and human greed. A new invention will not change the 2nd law of thermodynamics, but a new ethical framework might change our avarice.

Our allies protesting for social and racial justice have a similarly daunting ethical problem. It appears that our ethnocentrism and xenophobia is as hard-wired as our greed. While criminal justice reform is needed, public policy will not solve millennia of racism and xenophobia. Only a cultural and ethical change can move society toward a post-racist future. As in our environmental crises, there is no easy fix.

Yet, because our environmental and social problems are fundamentally ethical and cultural, the good news is that fixing one will likely fix the other. Any coherent ethical philosophy that favors social and racial justice will also favor sustainability and vice versa. This occurs because social justice and sustainability are applications of the Golden Rule, the precept in every major world religion that one should treat others as they would like to be treated. Social justice is based on the idea that societies and governments are responsible for following the Golden Rule, and sustainability is simply the application of the Golden Rule to future generations. Thus, a socially just society is one that treats its current citizens by the Golden Rule, and a sustainable society is one that treats its current and future inhabitants by the Golden Rule. As a result, if we move toward a more socially just society that implements the Golden Rule across its contemporary population, we are likely to pursue a more sustainable society that expresses the same ethic to its future population.

Perhaps we should see the protests for social and racial justice as the start of a movement that may be more significant than ending police brutality. The extraordinary progress toward sustainability made in the 1960s and early 1970s did not begin with the publication of Silent Spring or the Cuyahoga River fires. Instead, it emerged from the unrest and uprising of the civil rights and anti-war movements. Without those larger social movements to galvanize and educate people, elect new leaders, and, most importantly, change the ethics of American society, we may never have passed the Clean Air or Clean Water Acts. We might imagine that something similar could happen half-a-century later, and as we solve one side of our Rubik’s cube, the other sides will fall into place too.

Challenging the Pro-Growth Market: Mark Carney’s Reith Lectures and the Need for a Radical Approach
5 replies

Terrestrial and Solar Resources in a Steady State Economy Building Upon the Trophic Theory of Money: Preliminary Results from Canada
Scroll to top
$