For the past three years, I have been leading an important project for the Canadian Public Health Association (CPHA), which led to the release on May 25th of our Discussion Paper and a 100-page technical report on global change and public health.

In these documents, we identify what we call the “ecological determinants of health”: clean air and water, food, materials, fuel, the great cycles of water, nitrogen and phosphorus, detoxification of wastes, climate stability, and others.

These determinants of health come from the Earth’s natural ecosystems, and they are threatened by the massive and still growing human-induced global ecological changes now underway. These changes thus represent the greatest threat to the health of the public in the 21st century. They include the following:

Here I explore some of the many issues and approaches we discuss in our report, beginning with the underlying values and beliefs that drive the ecological changes we are witness to, and the changes in those values and beliefs we need to create. 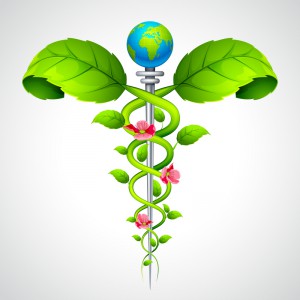 The drivers of the ecological changes noted above, now collectively being referred to as “The Anthropocene,” are a combination of population growth and affluence, with technology sometimes amplifying and sometimes reducing their impact. But underlying these drivers is an increasingly globally shared set of values and beliefs that together comprise “modernism.” The central value is a belief in “progress,” and that progress equates with growth, especially growth in material wellbeing.

This leads to the pursuit of economic growth to meet the growing demands of a growing population. But this is the fundamental problem because, in our current economic system, growth means more demands on the Earth’s natural resources and more damage to its ecosystems.

Such damage is resulting in the decline, and may result in the collapse, of key ecosystem functions that are the basis for the life and survival of humans and other life forms; when ecosystems decline or collapse, so too do the societies that are dependent upon them. This damage in turn undermines the economy and threatens the continued wellbeing and even the very survival of communities, societies, and our increasingly interconnected global civilisation.

Moreover, as resources become scarce and ecosystems fragile, those with wealth and power will ensure their access to them, even if it means others—including other humans and other species—have less. This will both heighten global and local inequity and push more ecosystems toward collapse and more species toward extinction. It will also heighten the potential for both local and global strife.

Faced with these immense challenges of potential ecological and social decline and collapse, the only answer from conventional economics is more growth. But continued conventional growth in a finite system—the Earth—is clearly impossible when it involves more growth in demand for resources and more strain upon our increasingly fragile life-supporting ecosystems. There are indeed limits to growth—or to be more precise, there is a limit to growth, and that limit is the Earth itself.

That change has to begin with the wealthy countries because we cannot say, in effect, that we will keep what we have but the rest of the world cannot have what we have because there isn’t enough to go around. We in the wealthy countries need to shift our focus from the pursuit of economic development to the pursuit of a higher goal: human development that is equitable and sustainable.

After all, what business are we in—or should we be in—as societies and governments? Are we here to grow the economy? Is that really the ultimate human purpose? Or are we here to “grow” people? And are we here only to “grow” some people—people like us, perhaps?—or are we here to pursue a more noble purpose: ensuring the achievement by everyone of the highest human potential of which they are capable, in a manner that is ecologically sustainable and socially just?

[Editor’s note: A version of this post ran originally in the Times Colonist.]

The Pope Francis Encyclical And Its Economics
Scroll to top
$