Pursuant to the pioneering economics of Nicholas Georgescu-Roegen (G-R), we recognize two sources of the low-entropy flow that sustains our lives: the solar and the terrestrial. They differ in their pattern of scarcity. The solar energy source is practically infinite in its stock dimension, but finite and dispersed (yet abundant) in its flow rate of arrival to earth. The terrestrial source of low-entropy matter-energy consists of concentrated deposits of minerals in the earth’s crust, including fossil fuels which are ancient solar energy accumulated over billions of years.

“Low entropy” means highly concentrated, in the case of energy, and highly ordered in the case of materials. Low-entropy resources such as timber, steel, and refined oils are more valuable and useful than high-entropy resources such as sawdust, rusted metals, and crude oil. (Highest entropy is pollution or, more philosophically, physical chaos.) (Image: CC BY 3.0, Credit: Ibrahim Dincer and Yunus A. Cengel)

Terrestrial low entropy is limited in its stock dimension, but can be used up at a flow rate of our own choosing. We cannot mine the sun to use tomorrow’s solar energy today, we must wait for it to arrive tomorrow. We can, however, mine and use up today the accumulated solar energy of Paleolithic summers, and have chosen to use it rapidly, at least during the past two centuries. We have thereby become more dependent on the scarcer terrestrial source, rather than the abundant solar source, than we were in pre-industrial times. We prefer the terrestrial source because it is already here and already concentrated—and we are impatient to use it to grow. We, especially economists, think that thanks to growth the future will be richer than the present, and, therefore, the (growth-inflicted) costs of depletion and pollution will be easier to bear.

Solar energy is abundant and renewed every day. To capture its flow requires extended space covered by a “net” made out of highly structured materials. These structures wear out over time and need maintenance, as well as replacement, and of course require initial construction. These needs must be largely met out of our diminishing terrestrial stock of low-entropy matter-energy. Current sunlight and terrestrial material collectors are complementary factors. The one in short supply is therefore limiting. The limiting factor is terrestrial low-entropy, concentrated materials in the earth’s crust, including fossil fuels. To see how useless abundant solar energy would be without material structures capable of capturing it, one need only look at the barren moon, or Mars, etc.

Prudential Use of the Limiting Factor

The economic question then is, how best to use the limiting factor? We should focus our attention on how to allocate our scarce dowry of terrestrial low entropy. We have two general alternatives. We can consume it directly in building cruise ships, jetliners, rockets, and Cadillacs—or we can invest it in structures that tap into our more abundant solar source of low entropy. We collect solar energy in two basic ways. The first way is indirectly through the photosynthesis of plants in agriculture, forestry, ranching, hunting, fishing, etc. Other species concentrate, to our benefit, the solar energy captured in the process of photosynthesis. And we exploit their population growth, either by taking only a renewable yield or by extinguishing the entire population for our one-time greedy bonanza. The other way is by investing in direct solar collection by modern technologies such as photovoltaics (PV) and concentrating solar-thermal power (CSP).

Our human lives require the conversion of incoming solar energy by photosynthesizing plants and thenceforth other species at lower trophic levels into food and fiber above their own maintenance requirements. Given sufficient bounty from these other species, we can then invest resources beyond our own mere maintenance. Investing terrestrial low entropy in a plow, for example, increases our ability to tap incoming sunlight for vital purposes. Investing in a Cadillac, on the other hand, is not a vital purpose but rather a luxury expenditure of our limiting factor. This led G-R to a rather dramatic conclusion: “The upshot is clear. Every time we produce a Cadillac, we irrevocably destroy an amount of low entropy that could otherwise be used for producing a plow or a spade. In other words, every time we produce a Cadillac, we do it at the cost of decreasing the number of human lives in the future.”[i]

It seems that in spending our limiting factor we face a tradeoff. Spending it on present luxury has the opportunity cost of fewer lives in the future (fewer plows, less sunlight captured, less food, fewer people). Saving it for future plows has the opportunity cost of less luxury in the present. This basic tradeoff exists regardless of how efficient the solar collectors may be.

No Wealth But Life 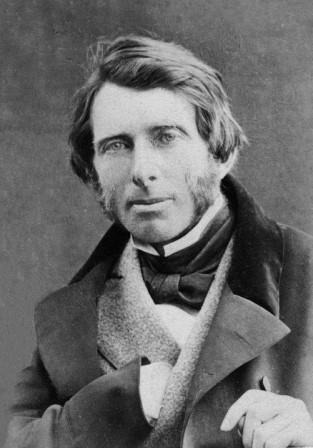 “There is no wealth but life. Life, including all its powers of love, of joy, and of admiration. That country is the richest which nourishes the greatest number of noble and happy human beings.” –John Ruskin
(Image: CC0 1.0, Credit: William Downey)

G-R’s argument was anticipated by Henry David Thoreau’s oft-quoted insight that “the cost of a thing is the amount of what I will call life which is required to be exchanged for it, immediately or in the long run.” Or as John Ruskin put it more succinctly, “There is no wealth but life.” Life requires current sunlight, and the most vital use of accumulated Paleozoic sunlight is to build or preserve material structures capable of increasing our ability to capture current sunlight.

The realization that the cost of present luxury is foregone future lives is dramatic and sobering. However, life with zero luxury at a mere basic subsistence may not offer much enjoyment, and reasonable people are certainly not willing to live that way. Yet extravagant luxury and gross inequality become less tolerable when the same reasonable people recognize the opportunity cost in terms of “good life” foregone. So, we are forced to ponder a big question posed by G-R: “Is it not true that mankind’s problem is to economize S (a stock) for as large an amount of life as possible, which implies to minimize sj (a flow) for some ‘good life’?”[ii]

Or, to put it more simply, should we not strive to maximize cumulative lives ever to be lived over time by depleting terrestrial low-entropy stocks at a rate that is low but sufficient for a “good life”? There is no point in maximizing years lived in misery, so the qualification “for a good life” is important.

I have always thought that G-R should have put that question in bold in the text rather than hiding it in a footnote. True enough, eventually the terrestrial stocks will be gone, even as the sun continues to shine. Mankind will revert to what G-R called “a berry-picking economy” until the sun burns out—if not driven to extinction sooner by some other event, as seems increasingly likely.[iii] But in the meantime, striving for a steady state with a rate of resource use sufficient for a good (not luxurious) life, and sustainable for a long (not infinite) future, seems to me a worthy goal. It’s a goal of maximizing the cumulative life satisfaction possible under finite and depleting terrestrial resource constraints.

G-R’s big question raises a number of others that get more pressing by the year as GDP pushes upward to the unsustainable brink:

These questions have not been central to modern growthist economics—indeed, not even peripheral! That is why steady-state economics puts them front and center, even into proposed legislation such as the Full and Sustainable Employment Act (pursuant to which the cabinet-level Commission on Economic Sustainability would grapple with such questions). In a steady state economy, technology is encouraged to increase the quality of life but not the quantity we know as GDP, the growth of which entails more population, consumption, and throughput of low-entropy resources.

The debate about net energy yields of direct solar capture is important, although difficult to resolve by calculation because of hard-to-define boundary conditions. Does the energy cost of a solar collector include the energy expended in mining the materials? Out of today’s mines or tomorrow’s depleted mines? In transporting the materials? Do we count the energy used to produce the products consumed by the miners? By the miners’ families? By the engineers who never set foot in the mine but design the process? By the teachers who trained the engineers and the miners? By the bankers and lawyers who finance the mine’s operation? Etc.

Yet the problem is resolvable by experiment, if not by calculation. Moreover, the experiment is also a very reasonable economic policy: Raise the price of the limiting factor by a stiff carbon severance tax (or preferably a strict cap-auction-trade system on carbon extraction) and redistribute the revenue progressively. Then, if a technology uses a greater integrated sum of fossil fuels (terrestrial low entropy) than it replaces or saves, it will be more expensive and selected against. If on the other hand it saves or replaces more than it uses it will be less expensive and selected for.

More efficient technologies for using terrestrial resources—including for the purpose of capturing the solar flow—increase the range of feasible answers to the tradeoffs identified by G-R’s analysis, but his fundamental questions are economic and ethical, and remain central regardless of technical efficiency. In policy, sequence matters: “limits first” induces “efficiency second.” Putting efficiency first makes limits less pressing and encourages continuing temporarily along the stupidly happy growth path to depletion, pollution, and collapse.

A Steady-State Analysis of the 2020 Presidential Election
2 replies

Social Justice in the Steady State
Scroll to top
$