Fixing the economy will require more than tax code tweaks and stock market peaks.  Anyone who’s been paying attention knows that we need big changes to the way we run things on this planet. Even a partial list of today’s social and environmental problems sounds grim:

s like these arise because the global economy has grown too big for the broader systems that contain it. We have too many people consuming too much stuff. Sure, the engine of economic growth has driven technological advances and provided a dizzying array of consumable goods. But it’s hard to argue that these material benefits outweigh the costs of social breakdown and environmental upheaval.

So we need a systemic change, but what are our options? We could try to increase the size of the planet, or try to find another one that’s habitable. But maybe it would be more prudent to focus on changing the economy. That means shrinking, and then stabilizing, the economy so that it can meet humanity’s needs while conserving and protecting the ecosystems that support life on Earth. The book I wrote with Dan O’Neill, Enough Is Enough, describes policies to do that, but as Peter Victor has noted:

The dilemma for policy makers is that the scope of change required for managing without growth is so great that no democratically elected government could implement the requisite policies without the broad-based consent of the electorate. Even talking about them could make a politician unelectable.

Victor’s statement rings true. For example, in the last U.S. Presidential election, the candidates sparred with each other over who could grow the economy faster and create the most jobs. Suppose that instead of trying to “outgrow” his opponent, President Obama had run on a platform of stabilizing the economy. You can almost hear President Romney’s inaugural address about more oil pipelines, more highways, more consumption, more, more, more. But to the climatologists, conservation biologists, and ecological economists (and even the butchers, bakers, and candlestick makers) who are tracking the limits to growth, it is becoming increasingly clear that we need to make room for our leaders to discuss economic stabilization. It’s time for them to begin working on an economy that aims for enough instead of always chasing more. 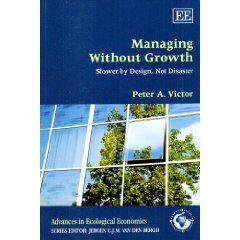 From Victor’s quote, we can deduce the top three things we need to do to begin the transition to such an economy.

1. Achieve widespread recognition that our planet is finite and that our economy has to fit within ecological limits. Politicians can’t talk about the limits to growth because most of the electorate remains unaware of the limits. Even with increasing attention paid to climate change and other developing crises, the conversation rarely turns to overconsumption in the economy. Schools are not teaching ecological economics, and people are too distracted by the routines of daily life to pay much attention. We need compelling stories and broad public education to get people discussing critical topics  such as the relationship between environmental and social systems, humanity’s place within nature, and the benefits of a steady-state economy.

2. Provide a set of practical policies for achieving a steady-state economy. All citizens (even the politicians) need to understand what can replace the growth-obsessed policies in use today. As soon as people begin to get a feel for how a well-conceived set of steady-state policies can outperform the obsolete policies of endless growth, politicians will gain the broad-based support they need to overhaul the system. The heart of Enough Is Enough describes this set of policies, but even a quick glance at them confirms Victor’s point: the scope of change required is indeed great. That’s why we need more than just awareness of the problem and a set of policy proposals.

3. Cultivate the will to act. Economic changes won’t materialize on their own. People have to want out of the current system, and they have to demand the transition to a new one. Without such pressure, entrenched elites (in both politics and business) have no incentive to overturn the status quo. There’s an awful lot of networking and organizing to be done.

With these three actions, we can get the economy we want and the planet needs. The unelectable politicians will be the ones who cling to the wishful thinking of perpetual growth. It’s time to take a stand, to put aside the destructive mania for more, and let our lawmakers know that enough really is enough.