They say the ironies never cease, and last week the EPA headquarters were named the “William Jefferson Clinton Federal Building.” But irony and legacy are not always good bedfellows. Before the history writers get carried away and bestow upon Clinton the label of Environmental Protector, let’s look at the rest of the story…

The most notable thing about Bill Clinton is that he had what it took to get elected, in spades. A passion for greatness, photographic memory, talk-show voice — the political package was perfect. If anyone was ever destined to be president, it was Clinton.

That’s not the same as being destined for an honorable legacy.

Something stands squarely between Clinton and the west wing of the political hall of fame. That’s the wing reserved for wise, dignified statesmen. The likes of Thomas Jefferson, Abraham Lincoln, and Franklin Delano Roosevelt reside in the west wing.

We’re not talking about little vices standing in the way. McDonald’s hamburgers and the occasional cigars (the ones for actually smoking) just made Clinton seem at once more like us and Winston Churchill. But Churchill makes the west wing; Clinton doesn’t. Not yet at least.

Was it the “other cigar” and sex with an intern, then? That’s definitely not good, but Thomas Jefferson (allegedly) had children out of wedlock. FDR consorted with a mistress and possibly several. Yet Jefferson and Roosevelt are squarely in the west wing, because they handled profound social issues with deep and nuanced dignity, not with cheap rhetorical tricks.

Take Jefferson, for example. If you stop by his Monticello home near Charlottesville, Virginia, you’ll find the bust of Francois Quesnay at the entrance. Next to Jefferson’s upstairs bedroom with the telescope, you’ll find Quesnay’s Tableau Economique adorning the shelves. In the Tableau, Quesnay described in great detail how agricultural production had to be – physically, scientifically had to be – the foundation of the economy. It wasn’t information, it wasn’t pixie dust, it was agriculture at the foundation, feeding the human body and ultimately the body politic. Jefferson developed a deep understanding of that as he honed his vision of American society and its economy.

In a happy coincidence, Jefferson was taken with the agricultural arts, as also evidenced at Monticello. In a masterful expression of agricultural and engineering savvy, he also helped lay out the University of Virginia. So Jefferson’s legacy is on the land, rooted in the recesses of a studious mind. He knew a lot about the environment; his name would have given more gravitas to EPA headquarters than Clinton’s.

But while Jefferson loved the earth, he was no tree hugger. He got the big picture, too. Without agricultural surplus, there was no division of labor, no jobs in the manufacturing and service sectors, and no increase in the standard of living.

When Jefferson sent Lewis and Clark to discover the West, he knew there was a limit to what was in the East, and for that matter the West as well. He knew the frontier would get homesteaded and farmed, with the nooks and crannies eventually filled in with manufacturing and services. He knew the growing economy would use up the land and resources and pollute the environment in proportion.

In other words, Jefferson knew there was a limit to economic growth. But he wanted that limit to be met with the virtues of a democratic republic. It was left to future statesmen to adapt the constitutional democracy to a full-world economy.

Thomas Jefferson, with whatever personal weakness, was a brilliant, studied man of immense civic virtue. Now can you imagine Jefferson uttering nonsense like, “There is no conflict between growing the economy and protecting the environment.”?

How about Abraham Lincoln on the stump? Can you imagine him tarnishing his legacy with, “There is no conflict between growing the economy and protecting the environment!” Of course not. He wasn’t called Honest Abe for nothing.

But Clinton.. who doesn’t remember the old win-win rhetoric that permeated his presidential oratory as well as that of his Cabinet (probably at his beckoning). No one on earth, with the possible exception of Hillary Clinton, is more associated with the slippery salesmanship, “There is no conflict between growing the economy and protecting the environment!”

For Jefferson or Lincoln, limits to growth and environmental protection weren’t yet major, pressing issues. That’s why you won’t find clear quotes about the relationship between economic growth and environmental protection in their transcripts. But Roosevelt, half a century before Clinton, saw the writing on the wall and was already calling for a steady state economy:

Our last frontier has long since been reached, and there is practically no more free land… Clearly, all this calls for a re-appraisal of values. A mere builder of more industrial plants, a creator of more railroad systems, an organizer of more corporations, is as likely to be a danger as a help… Our task now is not discovery or exploitation of natural resources, or necessarily producing more goods. It is the soberer, less dramatic business of administering resources and plants already in hand.1

Unfortunately for all, Roosevelt’s steady statesmanship was interrupted by the exigencies of World War II. After that, thanks partly to the Keynesian revolution in economics and the establishment of the World Bank and International Monetary Fund, the politics of economic growth took over in domestic policy making and international affairs.

This was all conducive to Wall Street and Madison Avenue taking over in American cultural affairs as well. Then along came Clinton, master politician, and Americans were all too ripe for, “There is no conflict between growing the economy and protecting the environment.” We wanted to have our cake and eat it too, and Clinton wasn’t truthful enough to tell us we couldn’t.

Actually some folks, especially in the natural resource professions, knew from the get-go something was wrong with the win-win rhetoric. Yet Americans by the beltway were led astray. City folks weren’t paying enough attention to the land; likewise country folks hadn’t studied the environmental pressures emanating from the urban sectors.

Most environmental problems build slowly, almost imperceptibly as the economy weaves its way through the ecosystem. It takes a savvy society to connect the dots from environmental degradation to the economic causes before the problems are pronounced and obvious to all. Think ozone hole, climate change, and ocean acidification. It helps immensely to have a president — like FDR — connecting the dots for us and reminding us of the connection. Unfortunately his successors failed to follow suit.

Wherever the lack of awareness, city or country, Clinton exploited it by claiming we could have our cake and eat it too. As a whole — public, private, educational and non-profit sectors — the American body politic was vulnerable to this corruption of the truth.

The legacy is insidious, systemic, and disastrous. Look around and you’ll see it everywhere. The president of The Nature Conservancy, with a blurb from Clinton, thinks there is some kind of natural capitalism that will overcome the trade-off between growth and conservation. In the midst of a 90% fossil-fueled economy, the self-proclaimed “Independent Business Voice for the Environment” tells us that “Addressing Climate Change Grows Our Economy.” Even the National Wildlife Federation, despite heavy activism on climate change, has a president who denies there is a conflict between economic growth and wildlife conservation.

With attitudes like that in the “environmental” community, what can we expect from the hard-core corporate community and politicians dealing with endangered species and climate change? They all expect environmental protection to accommodate growth as usual. Where are the checks and balances? 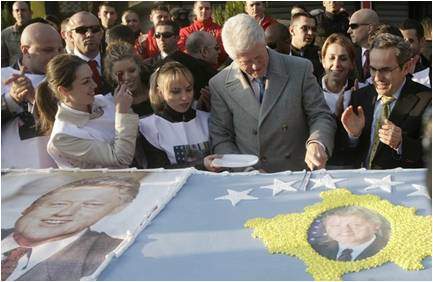 He can’t have his cake and eat it too! Photo credit: Hazir Reka.

Thanks in no small measure to the win-win legacy of Clinton, these days it seems everything good for the environment has to be premised upon economic growth or it won’t even be considered. No one wants to deal with the reality that environmental protection — biodiversity conservation, climate stabilization, clean air and water, sustainable fisheries, ecological integrity — cannot be reconciled with perpetually more production and consumption of goods and services in the aggregate.

And yet, if you want a handy indicator of biodiversity loss and other environmental impact, nothing can beat GDP. GDP up, biodiversity down. GDP up, green space down. GDP up, Mother Nature down. Environmental impact? “It’s the economy, stupid!” And nothing can beat your common sense in recognizing that. It doesn’t take the Tableau Economique to understand that growing the economy means growing the ecological footprint. All you have to do is connect the dots. It helps if the president does likewise.

Regarding Clinton, the “rest of the rest” of the story is yet to be told, because Clinton is still alive and well. That could be a good thing because, lo and behold, here and there are cracks in the rhetoric. Just last week, according to The Guardian, Clinton “warned that the US needs to cut its consumption of natural resources if it is to stave off the threats of climate change and rising prices.” So there’s some leadership consistent with environmental protection, which in turn is the first prerequisite of economic sustainability. (Not growth, but sustainability.)

At the same time, Clinton was stuck in his stubborn past, obsessed with economic growth and not able to get over the hump, onto the path of truth. He was still hedging, still trying to have his cake and eat it too. As a corollary to the old win-win rhetoric, he said, “We can grow even faster if we use less energy.”

Can you believe that?

Mr. Clinton, there is something seriously wrong with your approach to environmental protection and economic sustainability. Not only is it scientifically fallacious, it is roughly akin to telling a drug addict, “You can get even higher if you use less dope.” This approach will keep you somewhere near the Richard Nixon Room in the political hall of fame.

Nixon, too, had all the political tools. He was clever as could be, and boy could he get elected. He just couldn’t come clean on some crucial issues. He cannot sit with Jefferson, Lincoln, and Roosevelt in the west wing. Never.

Mr. Clinton, you don’t have an election coming up. You don’t have to ride the fence any more. Why not come right out and say that growing the economy in the 21st century is causing more problems — big problems — than it solves. You’ll have plenty of backing, including from E.O. Wilson, who you credit for some of your thoughts on sustainability. There’s also the likes of Jane Goodall, David Suzuki, even Chris Matthews from MSNBC to back you up. No doubt Jimmy Carter too would support the transition to a steady state economy.

But frankly you’re the important one, Mr. Clinton. You’re on the circuit, you’ve got media coverage, and you’re in the limelight/twilight of an extremely powerful run. Imagine the possibilities if you tell it like it like it is!

If you can do this, then Wall Street and the Fed will act a little differently, along with the Council of Economic Advisers, Congress, the Cabinet, the World Bank, and all others involved in fiscal and monetary policy matters. Instead of pulling out all the stops for growth, these policy makers can gradually start setting the levers and buttons back toward a sustainable, steady state economy. They can point to you and your leadership; you’ll empower them to do the right thing. And one day posterity can point to you in the west wing of the political hall of fame with Jefferson, Lincoln and FDR.

Who wants to sit there with Nixon? Clever but cynical, and very much discredited.

1See Czech, B. 2013. Supply Shock: Economic Growth at the Crossroads and the Steady State Solution. Page 228.

A Post-Growth Economy in France?
Scroll to top
$