A steady state economy is defined by a constant population and a constant stock of physical capital. In a way, it is an extension of the demographer’s model of a stationary population to include non-living populations of artifacts, with production rates equal to depreciation rates, as well as birth rates equal to death rates. The basic idea goes back to the classical economists and was most favorably envisioned by John Stuart Mill. 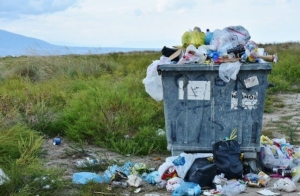 Waste is the final product of converting nature into ourselves and our stuff and then using up or wearing out our stuff. (Image: CC0, Credit: RitaE).

The population problem should be considered from the point of view of all populations—populations of both humans and their things (cars, houses, livestock, crops, cell phones, etc.)—in short, populations of all “dissipative structures” engendered, bred, or built by humans. Both human bodies and artifacts wear out and die. The populations of all organs that support human life, and the enjoyment thereof, require a metabolic throughput to counteract entropy and remain in an organized steady state. All of these organs are capital equipment that supports our lives. Endosomatic (within skin) capital—heart, lungs, kidneys—supports our lives quite directly. Exosomatic (outside skin) capital supports our lives indirectly and consists both of natural capital (e.g., photosynthesizing plants, structures comprising the hydrologic cycle) and manmade capital (e.g., farms, factories, electric grids).

In a physical sense, the final product of the economic activity of converting nature into ourselves and our stuff, and then using up or wearing out what we have made, is waste. What keeps this from being an idiotic activity—depleting and polluting, grinding up the world into waste—is the fact that all these populations of dissipative structures have the common purpose of supporting the maintenance and enjoyment of life. As John Ruskin said, “there is no wealth but life.”

Ownership of endosomatic organs is equally distributed, while the ownership of exosomatic organs is not, a fact giving rise to social conflict. Control of these external organs may be democratic or dictatorial. Our lungs are of little value without the complementary natural capital of green plants and atmospheric stocks of oxygen. Owning one’s own kidneys is not enough to support one’s life if one does not have access to water from rivers, lakes, or rain, either because of scarcity or monopoly ownership of the complementary exosomatic organ. Therefore all life-supporting organs, including natural capital, form a unity with a common function, regardless of whether they are located within the boundary of human skin or outside that boundary.

Our standard of living is traditionally measured by the ratio of manmade capital to human beings—that is, the ratio of one kind of dissipative structure to another kind. Human bodies are made and maintained overwhelmingly from renewable resources while capital equipment relies heavily on nonrenewable resources as well. The rate of evolutionary change of endosomatic organs is exceedingly slow; the rate of change of exosomatic organs has become very rapid. In fact, the collective evolution of the human species is now overwhelmingly centered on exosomatic organs. We fly in airplanes, not with wings of our own. This exosomatic evolution is goal-directed, not random. Its driving purpose has become “economic growth” and that growth has been achieved largely by the depletion of non-renewable resources.

Although human evolution is now decidedly purpose-driven, we continue to be enthralled by the neo-Darwinist aversion to teleology and devotion to random. Economic growth, by promising more for everyone, becomes the de facto purpose, the social glue that keeps things from falling apart. But what happens when growth becomes uneconomic; when it begins to increase environmental and social costs faster than production benefits? How do we know that this is not already the case? If one asks such questions, one is told to talk about something else, like space colonies on Mars, or unlimited energy from cold fusion, or geo-engineering, or the wonders of globalization, and to remember that all these glorious purposes require growth, in order to provide still more growth in the future. Growth is the summum bonum—end of discussion!

In light of these considerations, let us reconsider the idea of demographic transition. By definition, this is the transition from a human population maintained by high birth rates equal to high death rates to one maintained by low birth rates equal to low death rates, and consequently from a population with low average lifetimes to one with high average lifetimes. Statistically, such transitions have often been observed as the standard of living increases. Many studies have attempted to explain this correlation and much hope has been invested in it as an automatic cure for overpopulation. “Development is the best contraceptive” is a related slogan, partly based in fact, and partly in wishful thinking. 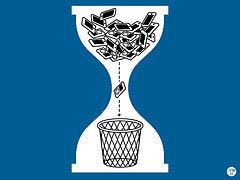 There are a couple of thoughts I’d like to add to the discussion of demographic transition. The first and most obvious one is that populations of artifacts can undergo an analogous transition from high rates of production and depreciation to low ones. The lower rates will maintain a constant population of longer-lived, more durable artifacts. Our economy has a GDP-oriented focus on maximizing production flows (birth rates of artifacts) that keeps us in the pre-transition mode, giving rise to low product lifetimes, planned obsolescence, and high resource throughput, with consequent environmental destruction. The transition from a high maintenance throughput to a low one applies to both human and artifact populations independently. From an environmental perspective, lower throughput per unit of stock (longer human and product lifetimes) is desirable in both cases, at least up to some distant limit.

Also, even if a nation follows the demographic transition and achieves a balance between births and deaths, there is still the problem of immigration. In the USA, Canada, and Western Europe, for example, nearly all population growth is due to net immigration. A mix of genuine humanitarianism and legitimate refugee needs on the one hand, with class-based cheap labor policies and ethnic politics on the other, has made immigration control politically divisive. If population pressure in pre-transition countries is eased by net emigration, while the benefits of population equilibrium in post-transition countries are erased by growth from net immigration, does that not weaken the basic causes of the demographic transition itself? In the face of increasingly open borders, high fertility seems less likely to be brought down by the automatic demographic transition. True, high-fertility immigrants into low-fertility countries eventually adopt the fertility behavior of the receiving country, but that takes a generation or more.

In a finite world, some populations grow at the expense of others. Homo sapiens and Mechanistra automobilica are now competing for land, water, and sunlight to grow either food or fuel. More nonhuman “bodies” will at some point force a reduction in human bodies. This forced demographic transition is less optimistic than the voluntary one induced by chasing a higher standard of living by engendering fewer dependents. In an empty world, we saw the trade-off between products and people as motivated by a desire for a higher standard of living. In the full world, that trade-off is forced by competition for limited resources.

The usual counter to such thoughts is that we can improve the efficiency by which resource throughput maintains dissipative structures. For example, a car that lasts longer and gets better mileage is still a dissipative structure, but with a more efficient metabolism that allows it to live on a lower rate of throughput. Likewise, human organisms might be genetically redesigned to require less food, air, and water. Indeed smaller people would be the simplest way of increasing metabolic efficiency (measured as the number of people maintained by a given resource throughput). To my knowledge, no one has yet suggested breeding smaller people as a way to avoid limiting the number of births and neither do I. We have, however, been busy breeding and genetically engineering larger and faster-growing plants and livestock, as well as building larger exosomatic organs, so that we become smaller relative to the other organisms we depend on, although we remain the same size absolutely. So far in the empty world, the latter dissipative structures have been complementary with populations of human bodies, but in our finite and full world, the relationship has become competitive.

Indeed, if we think of the population as the cumulative number of people ever to live over time instead of those simultaneously living, then many artifact populations have long been competitive with the human population. That is, more consumption today of terrestrial low entropy in non-vital uses (Cadillacs, rockets, weapons) means less terrestrial low entropy available for tomorrow’s vital use of capturing solar energy (plows, solar collectors, dams, windmills). The solar energy that will still fall on the earth for millions of years after the material structures needed to capture it is dissipated, will be wasted, just like the solar energy that currently shines on the barren moon.

If our ethical understanding of the value of “sustainability” (longevity with sufficiency) is to “maximize” cumulative lives ever to be lived, subject to a per capita consumption level sufficient for a good life, then we must limit the load we place on Earth at any one time. Fewer people, and lower per capita resource consumption, facilitated by more equitable distribution, mean more (and more abundant) lives for a longer, but not infinite, future. There is no point in maximizing the cumulative number of lives lived in misery, so the qualification “sufficient for a good life” is important, and requires deep rethinking of economics and a shift of focus from growth to sufficiency, including sufficient habitat for other species. It also requires a rethinking of the traditional pro-natalist dogmas of the fundamentalist branches of most religions, including Christianity, Islam, and Judaism. The modern secularist religions of Marxism and Scientism likewise proselytize for the Ecumenical Church of Growthism while ignoring population.

A Post-COVID Vision: The Full and Sustainable Employment Act
8 replies

Oil and Real Estate Bubbles in Canada: What Goes up Won’t so Smoothly...
Scroll to top
$