People tend to think of Russia as a wide-open country with plenty of space for economic growth. While it may take days to ride the trans-Siberian railway, any notion of an empty Russia is as antiquated as Dr. Zhivago. European Russia, especially, has been cultivated, harvested, logged, mined, fished, and “developed” to the gills with roads, bridges, railways, power lines, pipelines, grids, towers, cables, dams, and canals connecting every industry under the sun to thousands of towns and cities plus tens of thousands of villages. Pollution problems abound. Such overdevelopment is due in no small part to the Cold War aspirations of the Soviet Union, which tried to defeat the USA on the scoreboard of GDP. 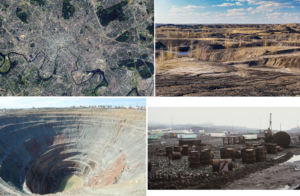 Given the overdevelopment of Russia, the practical motives of Putin vis-à-vis Ukraine surely include the rich soils (“chernozem”) and grain-belt climate of the steppes comprising Russia’s western doorstep. With the breadbasket landscape of Ukraine and a capitalist mode of production, Russia would become a bona fide superpower on the order of the Soviet Union; Putin’s dream come true.

Those forementioned villages, however, are dying out as fast as small farms in the American Midwest, and for the same basic reason. They’re being pushed out, literally and economically, by industrial agricultural operations, as Russia’s grain exports have exploded to a level approximately 20 times over the past two decades. The agricultural community knows this and intelligence agencies know it, but the general public (especially in the USA) remains oblivious to it, because the mainstream media consistently overlooks it.

This is not to imply that Ukrainian agricultural potential is the #1 reason Putin wants Ukraine, whether in whole or under control. NATO geopolitics gets the most attention, as it probably should, along with Putin’s documented desire for a return to Soviet-era Russian control in Eastern Europe. Yet it would be naïve to think Ukraine’s world-class agricultural productivity and potential is of no concern to Putin, regardless of how much agriculture is already on Russian soil. That would be to overlook history and the role of agriculture in the geopolitical affairs of Europe.

Usually when an autocrat rears his ugly head, the overused metaphor of Hitler is trotted out, often as a fallacious reductio ad Hitlerum. Vladimir Putin gets his share of comparison. However legitimate the personal parallels may be between Putin and Hitler (especially a searing sense of national humiliation), the focus here is on the most overlooked geopolitical parallel: that between Nazi Germany and today’s Russia. 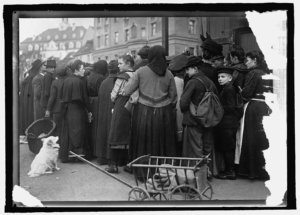 By the late 1930s, the Third Reich was running out of space for the economic growth it needed not only for World War I reparations, but for building a modern war machine. It wasn’t space for military industrial activity that was in short supply; rather, it was space for the civilian population to live and prosper in. What the Fatherland needed was more room for the children: more living room for Germans, more “lebensraum.” And the type of lebensraum it especially needed—for the sake of prospering economically and socially—was agricultural lebensraum.

History students learn about the hyperinflation that fanned the flames of Hitler’s rhetoric and doomed the Weimar Republic. Monetary and fiscal policies played a role—and certainly bank failures—but those iconic images of Germans waiting in lines for single loaves of bread reflect the supply side, too. Bread was scarce because grain (other than rye) was scarce; grain was scarce because, per capita, agricultural lebensraum was scarce. As Elizabeth Collingham stated in an interview for the Herald, “Food and agricultural concerns played a fundamental role not only in the origins of World War II but in the ongoing strategies and tactics of the German Reich.”

If you’re wondering who Elizabeth Collingham is, it will be my pleasure to introduce her.

The Road to War Starts with Appetite

A particular take on limits to growth, along the lines of Jared Diamond’s, for example, will lead you to interpret world affairs in terms of the waxing and waning of agricultural surplus. In 2014, I roughly interpreted the doctrine of Lebensraum through such a lens, including with a tenuous connection to Putin and Ukraine. The unfolding events in Ukraine lead to a renewed interest in this connection, and bring us naturally to the history writings of “Lizzie” Collingham. 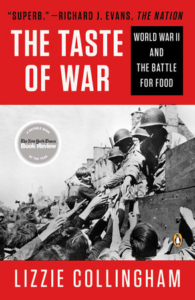 The Taste of War: A history book with growing relevance. (Penguin Random House)

Collingham’s scholarship has been overlooked, most notably The Taste of War: World War II and the Battle for Food. Not that I’m the authority on what is and what’s not overlooked; after all, Taste of War was a New York Times “notable book.” Yet if it wasn’t overlooked, it must have been “underlooked,” because we see next to nothing in the mainstream media about Ukraine’s agricultural productivity as a motive for Putin invading far further than the “smart” money bet (that is, no further than Donbas and Crimea).

Evidently the media reflects the limitations of geopolitical think tanks such as The Atlantic Council, who could benefit from a little less neoclassical economics and a little more steady-state economics, plus a reading of Collingham. Steady-state economics provides the theoretical background on limits to growth and the need for a steady state economy as the sustainable alternative to growth. The key implication for national security and international stability is that the aggressive pursuit of economic growth inevitably leads to war.

In Taste of War, Collingham builds upon that theoretical background (not intentionally, but effectively) with compelling empirical evidence for the primacy of agricultural surplus in economic welfare, as extended to national security concerns. She details the nexus between food and strategy in domestic policy and in military operations. For the Nazis, starving hundreds of thousands of “useless eaters” in Europe—not just in concentration camps but out on the lebensraum—was a conscious decision pursuant to a detailed strategy, the ominously named “Hungerplan.” The Hunger Plan, overseen by Herbert Backe, the Nazi’s Minister of Food, was designed especially to starve enemy forces while feeding their own along the front.

When I asked Collingham what she thought of the parallels to Putin’s invasion of Ukraine, she was unequivocal. “People of the West are amazingly unaware of the importance of Ukraine to Russia,” she opined, “not only as a strategic location on the map of Europe but as the main competitor and potential contributor to Russian grain production.” I’m guessing that applies especially to Americans, not only because they’re the furthest west, but because their economic education is most dominated by neoclassical economics, which seems blind to limits to growth and the primacy of agricultural production in maintaining national and global economies.

Collingham didn’t go so far as to label Putin’s invasion the second coming of Lebensraum doctrine, yet perhaps the biggest difference is the cardinal direction. It’s a type of lebensraum doctrine alright, coming from the east instead of the west. While Russia may not have a Nazi-style Hungerplan, Russia does have its own legacy of starving Ukrainians, when they were part of the Soviet Union no less.

The conventional assumption that Putin cares little about Ukraine grain stems in part from the stranglehold he has on the European energy sector. The notion seems to be, “Why would Putin care about farm commodities when he holds the keys to the gas pumps?” Unfortunately, this ignores Putin’s documented concern about food production.

Furthermore, from a theoretical and strategic standpoint, Putin the Practical must have a sense that the energy sector is a bit like the information sector: it’s worthless unto itself. To put this point most profoundly, “You can’t eat gas.” If the gas and oil isn’t fueling the other economic sectors—starting with the agricultural sector—what’s it good for? Lubricating horse-drawn carts?

Nor is it good for fueling heavy manufacturing, light manufacturing, or a power grid for the service sectors, unless the agricultural sector is fueled first. No food, no activity; little food, little activity. In fact, it takes a lot of food to free up enough labor into a full-fledged, well-developed economy. It takes, in other words, a well-oiled (so to speak) agricultural sector.

Agricultural surplus allows for the other sectors to develop and “authorizes” the exchanging of money. In that very real sense, agricultural surplus generates all the money in the world. That’s the trophic theory of money in a nutshell. It helps us understand Lenin’s statement that “grain is the currency of currencies.” It also helps us understand why the obsession of Hitler with Russian oil fields in the Caucasus wasn’t all about fueling tanks for the Wehrmacht and planes for the Luftwaffe.

As Collingham describes in Taste of War, the Nazis needed fuel for farm tractors and for trucks to transport grain. The Hunger Plan was on a fast track, with German civilians and soldiers taking over the Polish and Ukrainian farms and fields. Backe and his fellow bureaucrats had calculated that this was the only way the Wehrmacht could prevail in Operation Barbarossa (the German invasion of the Soviet Union). Not only would the Nazis have to feed themselves, they’d have to choke off the Red Army’s grain supplies.

Evidently the proportion of Caucasus petroleum going to Nazi agriculture was slated to be roughly 30-40 percent. While the Wehrmacht captured some Caucasus areas and oilfields, it was under constant attack by Red Army forces. It never secured them sufficiently to follow through with transporting oil back to the front further north, much less farms to the northwest. The Soviet pushback in the Caucasus was as pivotal a point as any other in World War II.

Does anyone think Putin, as calculating as he is, doesn’t understand the durable, double-barreled power of oil and agriculture? Does anyone still think Putin, as ruthless as he is, won’t take as much of Ukraine as he can capture? His infamous spite may extend even further back than the collapse of the Soviet Union; he could harbor a defensive if not vindictive attitude over the catastrophic Russian losses from Operation Barbarossa.

Putin’s motives aside, one thing is especially relevant for the intelligence community, statesmen, and diplomats: At this point in history, war is inevitable as long as nations are determined to grow their economies. Economic growth starts at the trophic base; that is, with agricultural surplus. In other words, a bigger economy requires more lebensraum.

What does that make peace, then, in economic terms?

A Perfect Storm for Inflation: COVID, Loose Money, and Putin
Scroll to top
$