Throughout the United States in urban and suburban settings and in small towns, lawns and massive amounts of non-native flowers, shrubs, and trees dominate the landscape. Such an unhealthy landscape is hardly surprising within an economy obsessed with growth. We lay out grass lawns as fast as possible and throw down landscape arrangements with very little concern for ecological consequences. In contrast, a more thoughtfully designed and ecologically sound landscape fits hand in hand with the framework of a steady state economy.

The landscaping choices of home and business owners tend to be costly from an economic and an environmental perspective. Around $45 billion is spent annually to care for the 40 million acres of lawns in the U.S., with 800 million gallons of gasoline burned in dirty lawnmower engines. Application of broad-leaf herbicides and high-nitrogen fertilizers for yard maintenance also entails harmful runoff into streams, rivers, bays and estuaries.

Because of the health consequences of chemically laced lawns that are maintained by oil-chugging equipment, a number of organizations such as Beyond Pesticides and SafeLawns have been promoting alternatives. SafeLawns features a slogan, “Time to Get Your Grass Off Gas,” that is particularly pertinent, as the BP spill is the latest in the ongoing oil spills, leaks, and other fiascoes attributable to our dependence on oil.

Of the 220 million tons of carbon dioxide emissions coming annually from off-road vehicles, lawn equipment like mowers and leaf blowers produce about 12% or 26 million tons of the total. Air quality in urban areas can suffer greatly as a result of the dirty motors typically running such equipment.

Importation of non-native species for landscaping causes another set of expensive problems (again from both an economic and an environmental standpoint). And the costly impacts of importing alien ornamental shrubs and trees into the United States have not been explained to the public. There is no way to guarantee that non-native species are free of harmful diseases and insects when they are imported because the host plants may exhibit no symptoms. Once on the loose, it is very hard, almost impossible, to bring the invasive species under control.

The most valuable tree in the eastern U.S. from both a wildlife and commercial timber standpoint — the American chestnut — was almost totally eliminated by the blight from Japanese chestnut trees imported a century ago for the ornamental nursery trade.

This type of disaster has been repeated over the past 100 years with sudden oak death disease, Japanese beetles that entered on Asian nursery stock, the greening disease besetting citrus in Florida, and the soybean aphid that arrived on Asian buckthorns for the ornamental trade — to name just a few.

The staggering price tag for damages caused by invasive species is estimated at over $100 billion per year. Furthermore, 85% of the invasive species have been brought into the U.S. by commercial nurseries. These nurseries suffer no economic consequences for having marketed such exotics that “go astray” and cause millions in damages.

How Would Landscaping Change in a Steady State Economy?

A key feature of a steady state economy is sustainable scale — the economy fits within the capacity of the ecosystems that contain it. Achievement of sustainable scale requires us to value ecological resources and the services they provide. There is a huge opportunity to generate such value by shifting how we manage the landscapes that surround our homes and buildings. Steady state landscapes would enhance biodiversity, improve air quality, and provide food for birds and other wildlife.

Gardening with native species is part of the paradigm shift. The massive harm that accompanies today’s unsustainable landscaping with exotic ornamentals is not reflected in economic calculations. Externalization of such harm would not be part of a steady state economy — an economy that values environmental resources today and in the future.

Professor Douglas Tallamy at the University of Delaware argues in Bringing Nature Home that unless we restore native plants to our yards, the future of biodiversity in North America is dim. Tallamy calls on the public to reevaluate its centuries-old love affair with alien ornamentals and to reverse the practices of the lawn and garden industry in order to provide food for wildlife.

People frequently ask me about tangible actions they can take to move us to a healthier planet. One major opportunity for many is to focus on their own yard or work with their local schools or businesses to shift to landscaping that is a positive force.

If you want to bring back birds and butterflies, you need to have the native vegetation where they can complete their life cycle. In addition to shelter from predators and nesting sites, birds need insects, not seeds or berries, to feed their young. Professor Tallamy asserts: “Birds will not be in our future if we provide them only with shelter and nesting sites.”

What a remarkable result would occur if the $45 billion currently spent on lawn care that degrades biodiversity and causes significant pollution were instead devoted to attractive native landscapes teeming with life! 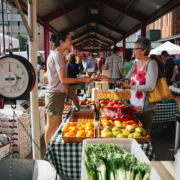 The Triangular Economy: Behind the Circular Flows
7 replies

The “Good New Days” in a Non-Growing Economy