The saying “you are what you eat” is clearly true to a great extent, but there’s more to the story. The food we consume not only affects our being directly, but also the environment and the economy—and therefore us indirectly as well. Eating more vegetables and less meat and dairy is better for the health of most individuals here and now, and certainly for the health of the planet, now and for the long run. Without a healthy planet, there’s no healthy economy. 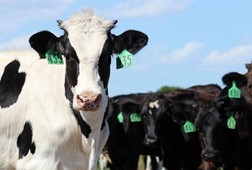 The science is pretty clear, starting with the fact that Earth is warming at an alarming rate and economic growth is a major cause. According to the latest estimates, many regions have already surpassed 1.5 degrees Celsius above pre-industrial levels. Meanwhile the Intergovernmental Panel on Climate Change clearly links greenhouse gas emissions to GDP growth. Among the factors contributing to that GDP growth is food consumption, and not all food consumption contributes equally (Figure 1).

When most people think about what they can do to help reduce greenhouse gas emissions, they don’t even think about GDP. They don’t think about their diet, either. That’s a problem. As Jalava et. al found: “Shifting away from animal-based foods [could not only] add up to 49% to the global food supply without expanding croplands; but would also significantly reduce carbon emissions and waste byproducts that end up in our oceans and as seafood byproducts.”

When shopping at a grocery store or eating at a restaurant, how many of us think about the process of meat production and how it affects the climate? It’s a question with significant repercussions. In 2018 farming was responsible for 574 million metric tons of carbon dioxide emissions in the USA, or 8.3 percent of the nation’s total greenhouse gas emissions. Meat production accounts for the lion’s share of these emissions.

Due to population growth and the lack of a plan for replacing or slowing meat production, those numbers will continue to grow. Emissions from agriculture are projected to increase to 80 percent by 2050. 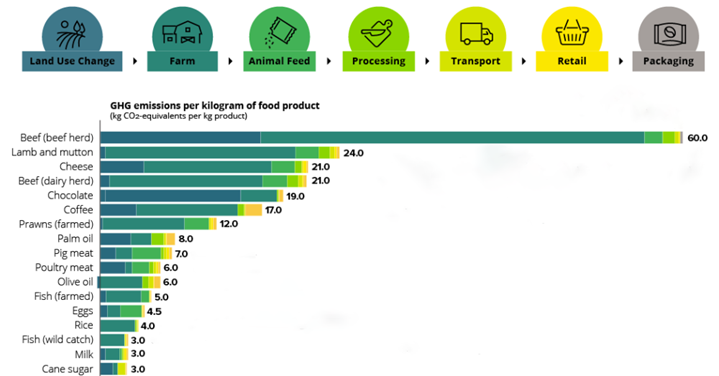 Earth or One Big Farm?

Ten percent of Earth’s surface is covered by glaciers (Figure 2). Nineteen percent of Earth’s surface is desert, salt flats, beaches, and sand dunes. The remaining 71 percent is considered “habitable land”—land that includes forests, grasslands, surface freshwater, and urban areas. As of this year, about half of the habitable land is farmland (which, as with urban areas, is much less “habitable” for wildlife).

Agriculture not only emits copious greenhouse gasses, it commits a colossal water footprint. Agriculture including livestock production accounts for 70 percent of freshwater use and is the largest water-consuming sector worldwide. This percentage accounts for all the sectors of agriculture; however, meat and dairy products are responsible for using the most. It takes about 1,840 gallons of water to produce one pound of ground beef, mostly because of the water needed to grow grain and other forage crops, and to provide drinking water for the cattle.

If we compare those 1,840 gallons to the daily per capita water use of an American (101.5 gallons), then the meat produced for a quarter-pound hamburger costs 4.5 days of water use. Meanwhile, the water footprint of a chicken egg is 50 gallons. If the USA cut animal product consumption by half, our food production would require 37 percent less water. 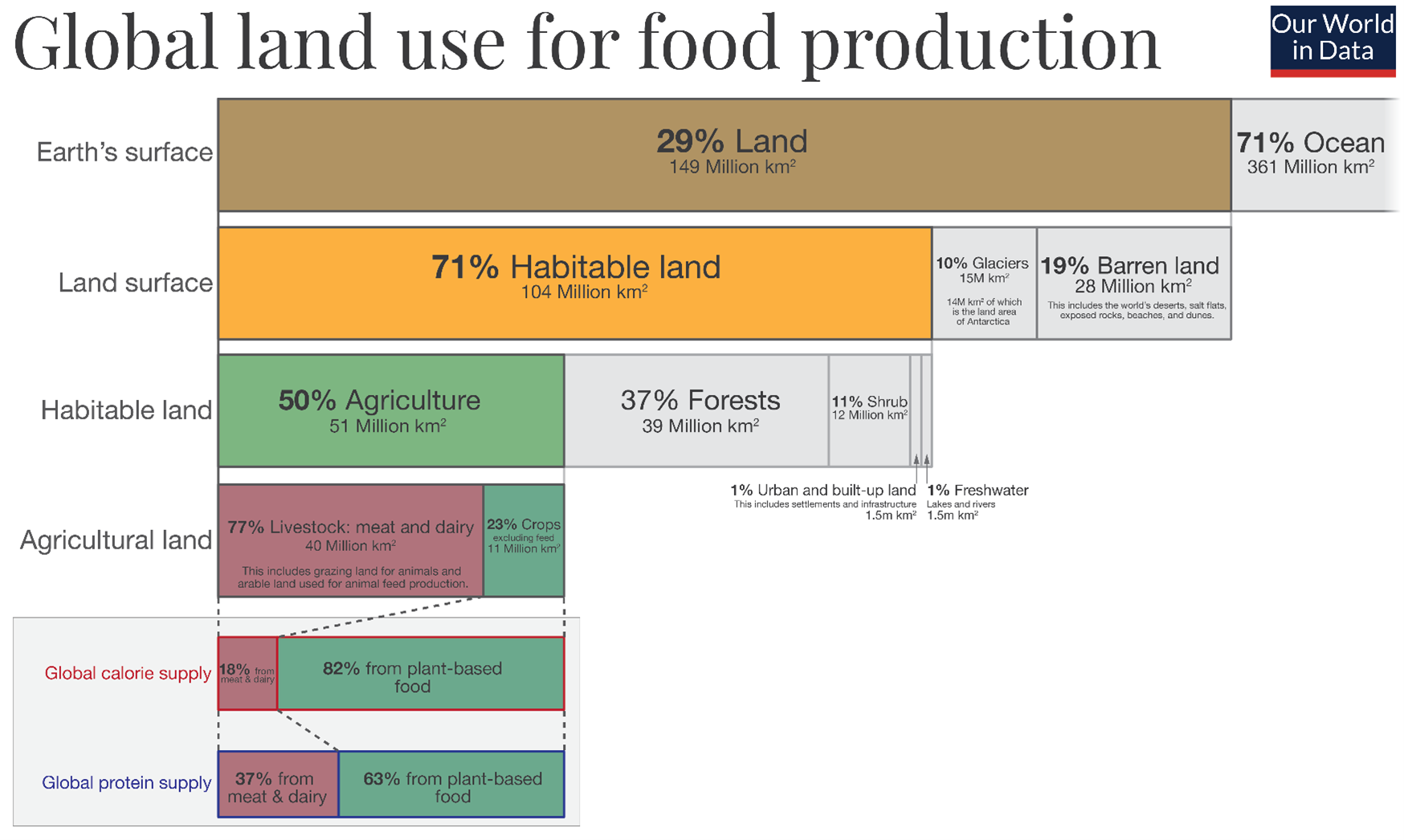 Earth’s surface and land use. (Image: CC0, Credit: Our World in Data)

Diet and Savings (In More Ways than One)

Consuming less meat (or no meat) is not only beneficial to the environment and human health but seemingly also the economy. If we continue increasing meat consumption at current rates instead of shifting to a vegetable-heavy or plant-based diet, it will cost the USA $197 billion–$289 billion each year, and the global economy up to about $1.6 trillion annually, just in direct and indirect healthcare costs. If we’d eat less meat or adopt a plant-based diet, we’d save a lot or all of that money.

Wouldn’t saving that money, and/or preventing those costs, be a smart thing? Of course, this perspective entails the recognition that more expenditure—higher GDP—is no longer the goal. The economic benefits of saving as opposed to spending is highly congruent with the trophic theory of money, and hopefully with the common sense of many citizens, but not with conventional economics and growth politics.

Given all the evidence for how a plant-based diet is more sustainable for society and healthier for people, why do we continue to consume so much meat and so many other animal products? It’s not entirely a matter of rationality on our part. For one thing, advertising gets in the way!

Direct advertising by producers isn’t the only form of public relations conducive to meat, dairy, and poultry consumption. The American Cancer Association’s “champion sponsors” include the likes of Tyson Foods and Perdue Farms. The American Diabetes Association gets money from Dannon and Kraft. It is no surprise then that the recipes promoted by these “health” associations include ingredients from these heavy hitters in the meat, dairy, and poultry industries.

People can readily change their diets to reduce their carbon footprints. Customers can opt for lentils or beans in their home-cooked meals, or even plant-based “meats” that have gotten increasingly similar to the real thing and quite tasty in their own right. Yet, individual dietary choices will not be enough to solve climate change, prevent the transmission of animal diseases, or conserve wildlife habitats. Among other things, we need systemic reform in our agricultural system.

For starters, a tax should be imposed on meat products. This could prevent 222,000 deaths and save $41 million in global health costs every year. Health warnings could also be issued on meat packages to inform consumers of harmful side effects. Certain farm subsidies could be cut, too, saving taxpayers money, reducing overproduction, and reversing the trend toward factory farming.

Farmers markets are an encouraging and more sustainable option for purchasing agricultural products due to the organic and low-impact practices of participating farmers. These markets have grown in popularity, and with help from local governments, their accessibility could be improved in more regions. The Farmer’s Market Coalition has already proposed recommendations for cities and counties to follow in building healthy foundations for farmer’s markets.

Of course, these types of reforms—especially the fiscal and regulatory policies—will be far more feasible if tied to the goal of a steady state economy. Otherwise the argument will be made at every step that such reforms are “getting in the way of business” and impacting GDP. Only when steady staters are populous enough will we overcome such arguments with, “Yes of course lowering meat consumption will lower GDP, and that’s just what the doctor ordered for you, the climate, and our planet.”

A Life on Our Planet: A Tentative Step Toward Mainstream Steady Statesmansh...