Warning: President Trump’s national security strategy is going to backfire like a shotgun plugged with mud. In one fell swoop, Trump called for:

2) Growing GDP as the key to national security, and;

Now many voters, going down the list, will promptly put a checkmark by one or two of the items, and some (especially Trump’s base) will check all three. But let’s think about the combination. Here we are, the wealthiest country ever, clamoring for more, more, more – with an insatiable appetite for global resources – while letting fewer and fewer people into the country to enjoy the bounty. All while releasing more pollutants into the global environment and demanding more favorable trade. 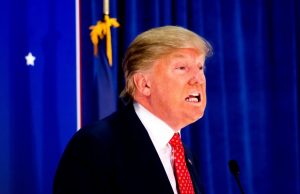 How would you describe such a policy? What adjectives would you use? If you’re living in most parts of the world, “frustrating” might come to mind. For Americans who care about our standing in the world, it might be “embarrassing.” And these are mild adjectives; “threatening” and “dangerous,” respectively, might be more telling.

No matter where you are or where your patriotism lies, it cannot be denied that Trump’s national security strategy is utterly greedy. We haven’t seen the likes since President George H.W. Bush announced “the American way of life is not up for negotiation” before the 1992 Earth Summit. But Trump’s strategy is far more sweeping, imbuing greed into a comprehensive framework of domestic and foreign policy.

Nothing could be more threatening to national security than having the rest of the world view you like a greedy pig at the global trough. That’s why Trump’s strategy may go down as the biggest foreign policy blunder in history. Is there a silver lining? Perhaps, if it causes enough reflection upon the components of Trump’s strategy.

The fact is, each of the components – tightened borders, growing GDP, better terms of trade – have their time and place. But how should these components be viewed by the richest nation during the early 21st century, with poverty suffocating many nations and environmental crises brewing globally? I think the answer is fairly simple.

To start with, we know that GDP growth cannot continue ad infinitum. We also know that, long before GDP stops growing, the increasingly desperate efforts to stimulate growth become more harmful than the growth is worth. This isn’t the 19th century with an open frontier to develop. At this point in history, oil spills, resource conflicts, and the extinction of species tend to outweigh marginal increases in GDP.

Although the limits to GDP growth cannot be thoroughly understood without a global perspective, it’s also clear that every nation has its own limits. Even for the nation that intends to invade others, eventually there’s no more “lebensraum.” In the 21st century, there’s basically no more “living room” to be peacefully taken. Grabbing more of it is tantamount to war.

It seems, then, that the more prudent approach to national security is adopting a steady state economy. This entails stabilizing the levels of production, consumption, and expenditure. Basically, it entails stabilizing rather than growing the GDP. And no it’s not stagnation: plenty of technological, financial, diplomatic, and national security dynamics occur in a steady state economy.

Of course, if the population is still growing in a steady state economy, then per person GDP declines. In other words, wages decrease and unemployment increases. In such an environment, the public sector – including defense – is every bit as endangered as the private sector. There’s nothing secure about that, either. Therefore, population stabilization is crucial for national security.

So we get to the issue of borders, which have to be tightened for the sake of stabilizing population. It’s hard to make friends and influence people while tightening borders, but there’s a big difference between respectful non-friends and angry, motivated enemies. The nation that announces the goal of a steady state economy has instant ethical credibility for tightening borders.

The steady-state nation essentially says to the world, “We’re not striving for more and more. We’re just trying to maintain what we have. We will solve our internal problems of poverty by reducing inequality. We’re trying to lessen our demand on global resources as well as our production of global pollutants. We care about the rest of the world, and when our situation is sufficiently stable, we can try to help other nations, especially those who also strive for stabilization as opposed to perpetual growth.”

The steady-state nation will garner respect in the international community, even if that respect comes somewhat grudgingly. It certainly will be far more secure than greedy nations that push their way into the cupboards of others. Greedy nations get their hands slapped at the UN and, if they persist in grabbing, start losing fingers outside the UN.

Finally, the steady-state nation provides crucial leadership in 21st century diplomacy. If a strong, wealthy nation such as the United States leads the way, others will follow suit. It is not difficult to conceive of a rock-solid alliance of steady-state nations that protect one another from the grabby advances of growth-mongering nations.

Meanwhile, nations with widespread poverty will finally have some breathing room. The outside demand for their natural resources will slacken palpably. Their attentions can be focused on their own economic development, and fewer of their citizens will become radicalized and retaliatory.

At that point in history, those nations that persist in their pursuit of rampant growth – especially those already having substantial wealth and power – will become the most isolated, castigated, and insecure nations on the planet. Let’s hope and pray the United States isn’t one of them.

Unfortunately, it will be if Trump succeeds in making America greedy again.

Thankful to be Back in the Steady-State Saddle

Nature Needs Half – And Twice the Steady Statesmanship
Scroll to top
$