In Piketty’s celebrated new work, Capital in the 21st Century, we are treated to a robust argument about the mechanics of worsening structural inequality. He narrates why owners of capital assets–stocks, bonds, and real estate–historically realize higher returns than wage workers. Piketty uses econ-speak to describe this as a gap in “the capital-income ratio,” and explains how our present system is engineered to favour capital-owners or “rentiers.” In the 21st century, he predicts slower growth in population and productivity, but a higher rate of return on capital, pushing us into inequality levels not seen since the 19th century.

But the limits we face are far greater than limits to just the capital-income ratio. While many of us share Piketty’s anxiety about worsening inequality (for me, every time I see a headline celebrating the rise of house prices), worsening structural inequality at this stage in history is but one symptom of our obsession with growth. Like Piketty, many post-growth thinkers are calling for a system change so the distribution of wealth will not inevitably concentrate in fewer and fewer hands. But rather than Piketty’s proposed progressive tax on wealth, we are calling for a fundamental adjustment to the financial system to make it more socially equitable and ecologically sustainable.

It might be helpful to interrogate the question of inequality this way:

While Piketty does acknowledge how the “financialization of the economy in no way contributes to the real economy,” he stops short of acknowledging that the volume of debt-money in the economy makes money scarce for some and abundant for others, and that the system is set up to either grow exponentially or fail spectacularly. More dubiously, in Robert Solow’s review of Piketty’s book, Solow suggests that “a society or the individuals in it can decide to save and to invest so much that they (and the law of diminishing returns) drive the rate of return below the long-term growth rate.” Not so in a debt-backed monetary system steeped in stratospheric and unprecedented levels of debt!

Piketty similarly avoids acknowledging peak oil or ‘limits to energy returns.’ At the most fundamental level, economic growth and capital accumulation require huge flows of matter and energy. This important consideration takes the form of but a few small caveats in Piketty’s book. He predicts that “wealthy countries” will grow at a rate of “1.2 percent,” while acknowledging that such a growth rate can only be achieved as “new sources of energy are developed to replace hydrocarbons.” I’m not sure how this prediction can be taken seriously when we are always and everywhere these days confronted by diminishing energy returns. These limits are evident in our reliance on unconventional oil, including fracking, the tar sands, and all of the new hazards that come with shipping it, such as building new pipelines and ports in fragile ecological zones, the release of methane and other undesirables from fracking, and the looming spectre of another Lac Megantic disaster. Add to this the uncounted costs of climate change–from private insured losses to government disaster expenses–and we wind up in the highly questionable position of counting disaster rebuilding efforts as additions to GDP! 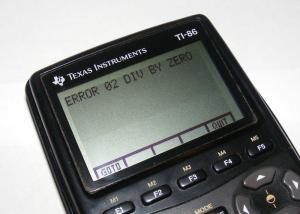 What happens if Picketty assumes a growth rate of zero? ERROR.

Perhaps, interpreted liberally, Piketty’s prediction of 1.2 percent growth is a couched acknowledgement that we have a failed growth economy on our hands. Or perhaps there is an even simpler methodological explanation for Piketty’s prediction, which is that if he were to assume a growth rate of zero, the “law” he applies–“beta equals savings divided by growth”–would yield absolutely no results whatsoever! And who can make newsworthy predictions with a divide-by-zero error message?

Piketty’s research is certainly useful and clearly resonates with a disillusioned public seeking to understand the causes of growing inequality. But without full acknowledgement of the limits to growth, there are also limits to his historical analogies–after all, the extent of ecological overshoot makes this period remarkably different from any period before it. Which means that the laws and formulae used throughout his book must be taken with a healthy dose of skepticism. EF Schumacher wrote

economists themselves, like most specialists, normally suffer from a kind of metaphysical blindness, assuming that theirs is a science of absolute and invariable truths, without any presuppositions. Some go as far as to claim that economic laws are as free from ‘metaphysics’ or ‘values’ as the law of gravitations.

Piketty makes a compelling, historically grounded argument about worsening structural inequality. But perhaps we can call for bolder action to respond to contemporary problems, including serious financial reform that reduces or extinguishes unsustainable debt; nurturing a grassroots movement toward more equitable, democratic work structures (so that more people have access to assets and ownership in the first place); and teaching a new generation of economists that all financial capital is fundamentally a gift from nature.

Why Do We Assume More Equals Better?
6 replies