We are all born pig-ignorant. Upon having accumulated a lifetime of knowledge we all promptly die. Ignorant babies replace learned elders. Knowledge is a depleting resource; ignorance is renewable. Yes, libraries and data banks grow, but knowledge finally has to exist in the minds of living people to be effective and evolve—unread books, unseen videos, and un-accessed hard drives are inert.

Like Sisyphus, we push the rock up the hill only to have it roll back down again. Progress is not completely illusory. However, it is three steps up followed by 2.5 steps backward. Successive generations repeat earlier mistakes. They also invent new ones. Any solution to a given mistake is usually forgotten within two or three generations and we have to learn it again. But it is not all bad—after all, babies are delightful and happy while old people are grumpy—ignorance is bliss. Life consists of more than knowledge. Life expectancy has increased, so the old know more when they die, leaving the babies with still more to learn. 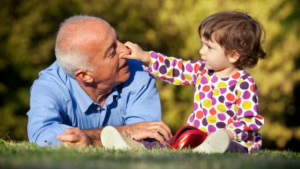 A massive transfer of knowledge to each generation is an unavoidable necessity. This transfer is not automatic. It requires two decisions. The old must decide what knowledge is worth their effort to teach, and the young must decide what is worth their effort to learn. Some knowledge passes both filters and becomes the basis for guiding the future and for discovering new knowledge. Other knowledge fails to pass one or both filters and is lost. Just as the world is always only one failed harvest away from mass hunger, so it is always only one failed generational transfer away from mass ignorance.

What do we know about these two generational knowledge filters? What do they let pass and what do they filter out? I really don’t know the answer, but I have one speculation, taken from E. F. Schumacher’s reflections on Thomas Aquinas and Rene Descartes. Aquinas said that even uncertain knowledge of the highest things is worth more than certain knowledge of the lowest things. Descartes believed otherwise, that only knowledge that had the certainty of geometry was worth retaining, and uncertain knowledge should be abandoned even if it pertained to higher things. These two filters have very different selection biases. In their extreme forms, they represent opposite errors of judgment about what knowledge to keep and what to jettison.

Which error are we most likely to commit today? I believe we overemphasize Descartes and pay too little attention to Aquinas. I take Aquinas’s “higher things” to mean purposes, knowledge about right purposes. Lower things I take to refer to techniques—how to efficiently do something, assuming it should be done in the first place. We have overdeveloped our relatively certain knowledge of technique and left underdeveloped our less certain but more important knowledge of right purpose. The old seem more interested in teaching technique than purpose, and the young obligingly seem more interested in learning technique than purpose. So we develop more and more power, subject to less and less purpose. As physicist Steven Weinberg says, the more science makes the universe comprehensible and subject to our control, the more it also seems to render it pointless, and the less our control is guided by purpose.

These thoughts remind me of a public debate I participated in at LSU in the 1970s regarding the construction of the River Bend Nuclear Power Plant near Baton Rouge. I presented economic and safety reasons for believing that the plant should not be built, that there were cheaper and safer alternative sources of electricity, etc. After my presentation, a nuclear engineering consultant from MIT made his rebuttal on behalf of Gulf States Utilities. It consisted entirely of presenting a scale model of the reactor core and explaining how it worked. He never replied to any of my arguments or said a word about why the reactor should be built. But his exposition of technique easily won the public debate. Afterward, everyone crowded around his model pointing to this and that, asking how it worked. “How to” questions of technique totally displaced “what for” questions of purpose. Maybe I needed a scale model meltdown of a reactor core! Maybe I needed a course in public relations. I might as well have been whistling Dixie.

Also, I am reminded of a conversation with a friend who was the film curator for the Library of Congress. He told me that digital recording techniques were now so advanced and cheap that the Library would soon be recording and preserving everything that appeared on TV, YouTube, radio, or Twitter, etc. Historians and scholars could then decide what was important and valuable. Librarians would avoid this difficult qualitative decision, and at the same time feel good about themselves for not imposing their value judgments on future historians. While I understand this point of view, I cannot share it because it seems to be yet another example of “how-to” questions displacing “what for” questions—a displacement likely to be continued by the “value-free” future scholars for whose benefit this almost infinite attic of junk is to be saved. 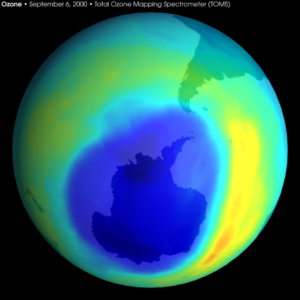 The ozone hole is an example of new knowledge that is a surprise for the growth economy, but it is bad news. (Image: CC0, Credit: NASA).

Knowledge is offered as a panacea these days. Young people are urged to go deeply into debt to “get a degree” and are assured that the growth economy will allow them to pay it back with interest and still come out ahead. Many have been disappointed. As one who has spent over 40 years in universities, I am doubtful about this exaltation of knowledge, even though in arguing for a steady state economy I have appealed to physical limits, not knowledge limits, leaving open the question of how much qualitative development could be supported within a biophysical steady state without quantitative growth. Also, the “knowledge limits” I have appealed to are themselves knowledge—knowledge of physical limits, mainly the laws of thermodynamics, rather than any inherent limits to knowledge itself.

Although I am eager for knowledge to substitute physical growth to the extent possible, the basic renewability of ignorance makes me doubt that knowledge can save the growth economy. Furthermore, knowledge, even when it increases, does not grow exponentially like money in the bank. Some old knowledge is disproved or canceled out by new knowledge, and some new knowledge is the discovery of new biophysical or social limits to growth. New knowledge must always be something of a surprise—if we could predict its content then we would have to know it already and it would not really be new. Contrary to common expectation, new knowledge is not always a pleasant surprise for the growth economy—frequently it is bad news. For example, climate change from greenhouse gasses was recently new knowledge, as was the discovery of the ozone hole.

One thing I have learned about universities is that much of what is taught in them today is based on the labor theory of value—”it was hard for me to learn this, so it must be worth teaching it to you.” This is a poor generational filter, and is even found in economics, which of all disciplines should know better! Also, much abandoned knowledge should have made the cut but did not. Indeed the whole field of history of economic thought has been cut from the curriculum to make room for more econometrics—the art of pretending to measure ephemeral and tenuous correlations among ill-defined variables in a world where the relationships to be measured change faster than the data for estimating them accumulates. The classical economists’ concept of the stationary state economy did not totally disappear, but almost.

Is just trying to save everything a solution? No. Do I have a solution? No. So I will stop here and simply ask that we all, young and old, pause, and calmly consider the proper balance between the “what for” and the “how-to” questions as filters for the generational transfer of knowledge. Let’s help the babies deal better with the perennial problem of renewable ignorance.

Why Bargains are Bad

Real Dichotomies Are Not Made “False” by Soft Science or Political...
Scroll to top
$