If it didn’t have such explosive consequences, you’d have to laugh at the comedy of errors unfolding in the U.S. political arena. Politicians are proposing farcical “solutions” to the debt crisis in a competition to see who is better at pandering to the electorate. Are citizens really supposed to believe that raising taxes, refinancing, or cutting expenditures will provide meaningful relief on ballooning bank-inherited interest payments — payments so stratospheric that the human mind lacks a conceptual reference point for them? Each and every government service could be cut and it still wouldn’t help pay off the debt. The problem can’t be solved by reining in an overgrown government bureaucracy because much of it was created by an unregulated, overgrown banking system.

On the advice of conventional economic sages, we are to believe that the “credit crunch” is an event that took place in the past, with the words “growth” and “recovery” being used instead. But the transfer of debt from the private sector to the public sector in 2008 has merely postponed the inevitable detonation of a debt bomb that started ticking many years ago. If the government manages the bank-inherited debt in such preposterously piecemeal terms, it will never be paid off. Propping up the same broken banking system won’t solve the problem and will eventually cause history to repeat itself.

Only meaningful regulatory and monetary reform — reform that lowers the leverage ratio of lenders and discourages irresponsible gambling with the money earned by average people — can truly diffuse the debt bomb and prevent this from happening again. The result will increase the stability of the financial system and bring us closer to an economic steady state. But it means that we have to give up our collective obsession with the meaningless, self-destructive growth provided by an overgrown banking sector. First, government leaders must stop celebrating the growth of debt-inflated GDP figures like unthinking, euphoric addicts.

How we got here

No one can pinpoint the causes of the Great Depression with certainty, but prominent economist Irving Fisher argued that the predominant catalyst was over-indebtedness and speculation, which fuelled asset bubbles (Fisher, 1933). Sound familiar? After the Great Depression, the U.S. government initiated reforms based on Fischer’s explanation of the problem. The purpose was to avoid another debt-driven crisis. New regulations prevented bankers from speculating with depositors’ savings, and the U.S. economy experienced many years of prosperity without financial crisis. Investment banking was a more conservative endeavor and savings and loan funds were not used for speculation or risky business investing.

Fast-forward half a century. During the 1980s, the deregulation of banking allowed savings and loan banks to make increasingly risky bets with borrowers’ money. Some banks failed during the savings and loan crisis, yet the process of deregulation continued. Meanwhile, bankers’ wages skyrocketed. So-called new financial “products” facilitated speculation and fueled an illusion of growth and prosperity. The illusion enshrouded bankers in a mystical aura. Everything they touched turned to gold, and politicians and citizens began to regard them as sages. Only the most intelligent people, one might suppose, could create so much wealth so quickly. 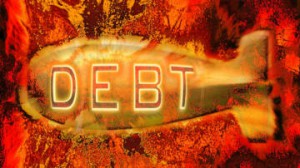 The illusion of growth produced illusions of stability and prosperity; bad decisions were rewarded while lessons from history were either disregarded or forgotten. In 2008, as the American economy inched uncomfortably close to detonation, the big banks revealed that the debt bomb was much larger than initially thought. Still the regulatory bomb squad sat idle. At no point did they come up with a useful plan for truly defusing it — it was simply postponed through the transference of debt. This occurred in spite of the risks associated with a pending disruption of the monetary system: the potential disappearance of savings, the foreclosure of homes, disruptions in the flow of goods and services, and unemployment. As a bomb counting down to detonation, here is the timeline we need to bear in mind:

At this point in history, with the debt reaching more than 14 trillion dollars, U.S. leadership has a choice between defusing the bomb with meaningful regulatory and monetary reform — reform that lowers the leverage ratio and punishes irresponsible institutional gambling — or further bandaging a broken system that meaninglessly consumes government expenditures and cripples the real economy to the benefit of big banks. Choosing the latter will again postpone the inevitable, maintaining an unstable economic status-quo obsessed with illusory growth derived from debt-inflated GDP.

If the U.S. government refuses to defuse the bomb now, it will explode in the foreseeable future as risky banking practices continue and interest payments (penalties for past mistakes) soar to super-stratospheric heights. The irresponsible actions of financially bloated bankers are being overlooked by a government distracted with irrelevant ideological arguments. When the debt bomb finally detonates, those responsible will likely avoid the fallout in the comfort of their unjustifiable excess. And while average people can try to shield themselves by minimizing their exposure to the debt-inflated growth economy, they will undoubtedly suffer the most. If only those elected to represent their interests would overcome petty illusions and turn their attention to more critical reforms than cutting and taxing.

Selecting “Surrogate Species” for Conservation: How About an 800-Pounder?
6 replies