Many people think that advocating a steady state economy is like wishing for a miracle. I understand their reasoning and take their point—in the present era of growthism, it does seem rather like advocating a miracle. But that raises the question of exactly what is a miracle? And how many other miracles are we wishing for these days? Of course, science, by definition of its method, rules out the existence of miracles, if by a miracle we mean either something not explainable physically in terms of efficient causation, or else overwhelmingly improbable. Consequently, if a miracle did exist, science could not see it. Looking for a miracle with science is like looking for darkness in the narrow beam of a flashlight. 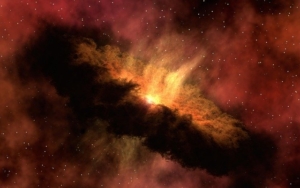 With science, it is difficult to explain miracles, such as the origin of life, which science believes to be a cosmic accident. (Image: CC0, Credit: WikiImages).

Consciousness, reason, and good and evil are undeniably real, yet we have no convincing explanation for them in terms of efficient causation or biophysical evolution. And the origin of first life (as opposed to its subsequent evolution into different forms) also qualifies as a miracle by the above definition. Sir Francis Crick, a co-discoverer of DNA, thinks the origin of life on Earth is so physically improbable (miraculous) that it must have arrived here from space—”directed panspermia” is the elegant name for this miraculous sidereal ejaculation. Science considers the whole amazing experience of life on Earth as just a cosmic accident.

Given that life on Earth is, according to science, eventually going to end, why make extraordinary efforts to prolong it, especially if, as the modern intelligentsia assures us, the universe and all life are just temporary accidents? We, as non-miraculous random events, can have no objective idea of what a good life is. Therefore we cannot know how much per capita consumption is sufficient for a good life. Instead of a steady state economy, the default economic rule of scientific materialism seems to be “more and more (especially for me) while things last.” Yes, I know that most scientific materialists are good people, but I am suggesting that their goodness must have origins other than their professed materialism.

For some of us, materialism is just a methodology, not an ultimate worldview in which divine purpose might replace cosmic random. For Christians, for example, hope in the promise of New Creation (Rom. 8; 1 Cor.15) substitutes for despair over the ultimate impossibility of preserving this Creation forever, as well as over our repeated failures to protect it while it lasts. Like this Creation, New Creation would be a miracle—a generalized resurrection of this mortal Creation.[1] It is a grace-based hope that flies in the face of the hard facts of evil, entropy, and finitude. It is a religious belief that death, decay, and oblivion are not the last words, and therefore it is classed as superstition in the modern secular academy, along with other religions.

The belief that the end of the world will occur soon, with lots of life-support capacity left unused (wasted), is a tenet both of some scientific catastrophists, as well as some religious fundamentalists, who consequently consider themselves exempt from the responsibility of Creation stewardship. Why sacrifice for a non-existent beneficiary, they logically ask. However, Pope Francis, for one, in his Laudato Si strongly affirms the value of this Creation, however transitory, and in this regard, speaks for most Christians and many other religious people, as well as for some thoughtful atheists.

Most scientists (and some theologians) will not be happy with talk about miracles or with hope in New Creation. They fear that such hope will undercut efforts to prolong the present Creation, which they believe is all there is or ever will be. Yet when faced with the ultimate heat death of the universe, plus the increasing likelihood of self-destruction well before then and with the meaninglessness implicit (and increasingly explicit) in their materialist cosmology, they sometimes flinch. They look for optimism (if not hope) somewhere within their materialism. They invent the hypothesis of infinitely many (unobservable) universes in which life may outlive our universe. 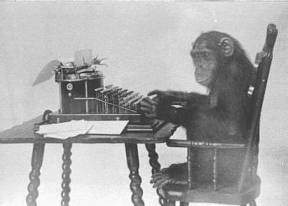 The anthropic principle aligns with the infinite monkey theorem and argues that infinitely many monkeys pecking away at infinitely many typewriters would hit upon writing Hamlet eventually. (Image: CC0, Credit: New York Zoological Society).

They were led to this extraordinary idea in order to escape the implications of the anthropic principle—which argues that for life to have come about by chance in our single universe would require far too many just-so coincidences among the magnitudes of basic physical constants. To preserve the idea of chance as reasonable cause and thereby escape any notion of Creator or Telos, they argue that although these coincidences are indeed miraculously improbable in a single universe, they would surely happen if there were infinitely many universes. And of course, our universe is obviously the one in which the improbable events all happened. If you don’t believe that Shakespeare wrote Hamlet, you can claim that infinitely many monkeys pecking away at infinitely many typewriters had to hit upon it someday. That such deification of random would take the meaning and pleasure out of reading Hamlet—or studying anything in “creation” at all—is a carefully repressed thought.

The idea of infinitely many universes, or monkeys for that matter, is speculative—at least as speculative as the idea of New Creation. The only evidence that could be offered to support hope for the future miracle of New Creation would be the occurrence of a similar miracle in the past, namely the present Creation. Science understandably tries to account for this Creation, as far as reasonable, in its own materialistic terms, and of course, from the beginning rejects “miracle” or God as an explanatory category. I am not objecting to that self-imposed, defining limitation of science. I am just saying that New Creation is not a scientific concept rooted in efficient and material causation. It is a religious hope rooted in the idea of final causation and ultimate purpose. As such it is neither contradictory nor dependent upon science.

Whether ad hoc postulation of infinitely many unobservable universes violates the self-imposed limitation of science and belongs more to the category of miracle, I will leave to the reader’s judgment. But the working hypothesis of scientific materialism, however fruitful it has been, should not be sanctified as the Ultimate Metaphysics of Chance. Nor does adding Darwinian natural selection to Mendelian random mutation alter the picture, since the selecting criteria of environmental conditions (other organisms and geophysical surroundings) are also considered to be a product of chance. Mutations provide random change in the genetic menu from which natural selection picks according to the survival value determined by a randomly changing environment.

Such a Metaphysics of Chance precludes explanation of some basic facts, pushing them into the category of miracle: First, that there is something rather than nothing; second, the just-right physical “coincidences” recognized in the anthropic principle; third, the “spontaneous generation” of first life from inanimate matter (which has apparently never happened again); fourth, the creation of an incredible amount of specified information in the genome of all the irreducibly complex living creatures that evolved from the relatively simple information in the first living thing (in spite of the fact that random change destroys rather than creates information); fifth, the emergence of self-consciousness and rational thought itself (if my thoughts are ultimately the product of random, why believe any of them, including this one?); sixth, the amazing correspondence between abstract mathematical thought and empirical natural order; and sixth, the innate human perception of right and wrong, of good and bad, which would be meaningless in a purely material world. Explaining these facts “by chance” strains credulity at least as much as “by a miracle.”

Metaphysical humility remains a virtue for both science and religion. The longevity of a steady state economy is a metaphysically humble goal appropriate for limited creatures in the face of ignorance and mystery. Christianity and science both recognize the fundamental finitude and frailties of this Creation. Christianity offers ultimate hope in New Creation; science necessarily remains mute about that. Scientism, however, seeing no limits to this Creation, offers instead of hope, the campaigning optimism of, for example, the Coming Singularity of the digital “new creation” with immortal silicon-based consciousness, or IBM’s new creation of “building a smarter planet,” or NASA’s new creation of colonizing Mars.

A moment’s reflection, however, shows that a spaceship, a space colony, as well as a population of infinitely long-lived silicon “people” must all operate as the strictest of steady state economies. If we cannot manage a steady state economy on the large and forgiving Earth out of which we evolved and to which we are evolutionarily well-adapted, then how likely are we to manage it on a barren rock under alien conditions, including extreme cold and intense radiation? Yet large amounts of taxpayer’s money are wasted in pursuit of the unnecessary miracle of colonizing Mars, while nothing is invested in the necessary and smaller miracle of attaining a steady state economy on our finite Earth. The pseudo-religion of scientism leads those who reject a steady state economy on earth as a “miracle” to imagine even bigger miracles to escape it.

The Meat of the Matter: Diet, Climate, and the Steady State Economy
6 replies

Innovating Beyond the Growth Trap: A Challenge to the Ecofiscal Commission’s...