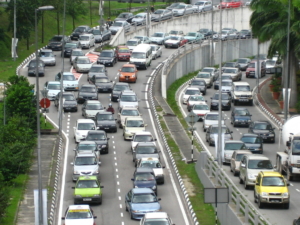 Who benefits from the congestion that inevitably comes with economic growth?
(CC BY-NC 2.0, lynac)

While there does not yet appear to be a coordinated nationwide coalition of activism, there are definitely increasing signs of grassroots efforts to push back against the all-too common, well-funded, political and mass-media argument that growth is always good.

For far too long, pro-growth donors and their lobbyists have worked very hard to convince the public and their elected representatives at every level of government and position of authority that continual GDP growth is the best measurement of a healthy economy. This continues to be the widely accepted narrative despite the fact that the country is experiencing increasing inequality and environmental degradation.

However, people who live, work and raise families in places where there is excessive growth (especially where drought is causing severe water shortages in the West) tell a different side of the growth story. Residents are concerned about the rate at which too much growth is now destroying the beauty, quality of life, and ecological balance of their areas—the very reasons they moved there to begin with.

Arizona is one of seven states under severe water restrictions due to unrelenting drought conditions. Incredibly, at the same time these states are struggling to agree on the amount of water for which residents, businesses and farmers will compete, city and state elected officials are still issuing building permits to build more housing developments. 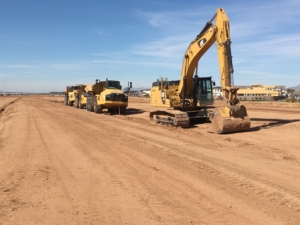 Maricopa County resident and professional nature photographer, Rusty Childress, wrote an op-ed published August 26, 2022, calling for fellow Arizonans to push back against excessive growth by voting pro-growth candidates out of office, emphasizing that “New development will only increase demand for scarce water supplies.”

“…soon [these new homes will] be functionally uninhabitable, once the city of Scottsdale—faced with increasingly dire water supplies of its own—stops hauling water to Rio Verde residents whose wells have run dry at the end of the year.

“The community is a prime example of how unchecked development can strain precious resources, degrade the environment, and ultimately leave residents with little option but to pack up and move elsewhere…

“Town commissioners and zoning board members are the ones who approve new construction permits. They’ll decide whether we stay on our current unsustainable path or whether we’ll change course. Elections for local offices like these might not command the same attention as statewide and national races, but they have an enormous impact on folks’ day-to-day quality of life.”

“Consider that new development has destroyed close to 2,000 square miles of natural habitat and farmland in Arizona since 1982. That represents a 114% increase in developed land over the same period.“

Childress concludes his comments with this irony:

“Many of Arizona’s new residents came to the state for its promise of a high quality of life: sunshine, clear skies, and wide-open spaces. If current trends continue, it’s only a matter of time before those amenities become a thing of the past.”

At least one group of Utah citizens has taken action to inform policymakers and local leaders of the overall need to achieve population stabilization to ensure economic and ecological sustainability for future generations. In 1997, this small group of concerned Utahans formed a coalition to oppose the rapid increase in population growth in the state. In 2016, they established the Utah Population and Environment Council (UPEC), a 501(c)3 nonprofit organization.

The 2020 Census confirmed what Utahans were already seeing: The state had the highest rate of population growth (18.4%) since the previous census. Utah’s way of life is rapidly transforming, and not all of that change is positive or beneficial to residents. UPEC’s mission, then, is “to achieve a sustainable, healthy, and happy human population living in harmony with the natural environment.” 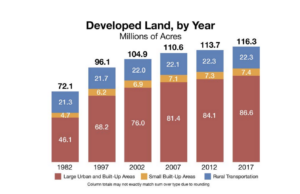 Meanwhile, the GPI is offered as an alternative to the Gross Domestic product (GDP) for indicating quality of life and social advancement. The GPI is not quite independent of growth, though. Several economic variables that track with GDP are used in calculating GPI, including personal expenditure and net capital investment. Altogether, 16 variables are used and categorized as social, economic, or environmental components.

In January 2011, UPEC released its Utah GPI study. They found that, from 1990–2007,  Utah made “genuine improvements” in quality of life. However, they also found “indications that several critical contributors to our well-being are eroding. Specifically, erosion in the social and environmental components are offsetting the economic gains.” They concluded that the “costs of economic growth are offsetting the additional benefits.”

My guess is the offsetting of benefits is even further along now than it was eleven years ago.

I myself have been an active participant in drawing attention to overpopulation in Alexandria, Virginia, my previous city of residence. Alexandria has 11,000 people per square mile. It’s a city so tightly packed with people that planners have considered developing additional housing on top of school buildings! Thankfully, this part of the plan was ultimately eliminated due to the opposition expressed by local residents.

Some may, at first glance, see some of these “smart-growth” schemes as creative and problem-solving. But the verdict is far from in among those who have studied the case of Portland, Oregon and other U.S. cities with fast population growth. And none of the analysts have studied perpetual growth, a story that must end in failure and sour in the later chapters.

As for me and Alexandria, I throw my skepticism in the ring with my former fellow resident dissenters, who at the time were smart enough to see denser living as a ponzi scheme for making residents pay more for a lower quality of life while cities, and especially developers, pocketed the profits.

While some of these “innovative” efforts to reduce our carbon footprint have achieved some short-term success, unrelenting growth eventually overwhelms and undermines them. And too often it is local residents left holding the bag with increased congestion, rising taxes, and not much to show for having made these “smart growth” sacrifices for the environment.

I now live in Fairfax, Virginia—part of the Washington, DC metropolitan area just like Alexandria—that uses any means possible to keep growing. As in Alexandria, there is hardly any thought of implementing a steady state economy, much less a period of degrowth.

We as a society have a monumental challenge to change the accepted narrative that the only way to measure progress is with a higher GDP. But I am nonetheless encouraged by the signs that more and more ordinary citizens are saying enough is enough. Imagine the possibilities if these individuals and groups formed a larger coalition of networking and activism. Now that is the type of “growth” I would love to see.

Christy Shaw is a content writer and Member Services Manager for NumbersUSA. Her opinions here are her own.

Conservatives and the Steady State Economy: A Natural Fit
Scroll to top
$