Editor’s Note: Although The Daly News is known for its commentary on the limits to growth, we are willing to consider other viewpoints. That is why we invited Professor Milton Mountebank to submit regular columns. He graciously accepted our invitation, citing it as “an opportunity to educate both the naive and the ignorant masses who genuinely believe the earth is finite.” We are fortunate to have him, especially in light of his recent prize in economics.

My colleague at the National Review, Jonah Goldberg, recently penned an article, in which he starts down the road with a sure step but then falters and ultimately stumbles over his erroneous notions about economic growth. I provide some subjective commentary below, but I also offer an objective economic analysis to set the record straight. I have devised a nonparametric econometric statistic, normalized on a scale from 1 (utterly false) to 10 (unassailably true) that rates the veracity of each of Mr. Goldberg’s premises (in the interest of conserving ink, I shall refrain from reproducing the 17-page formula here; in any case, it is likely that readers would find it well beyond their comprehension).

Premise #1: Gandhi’s mantra, “Live simply, so that others may simply live” is patently absurd. Simple living has no benefits, only consequences that begin with poverty and end with death.
Mountebank’s veracity rating (MVR) = 9.944511299
Mr. Goldberg is right on target with this assertion (note the unprecedented MVR). I am confounded by the fact that Mr. Gandhi and his simple living ethos remain in discussion to this day. What did Mr. Gandhi ever do to deserve such attention? I suspect that we have revisionist history to thank for the prolonged acceptance of his philosophies. As for simple living, I submit that every single person who has ever aspired to a simple life has ended up in the grave.

Premise #2: Steady staters (especially prominent ones like Paul Ehrlich, Herman Daly, and Joshua Nelson) are a paranoid lot who hate markets and freedom nearly as much as they love vegetables. They wish to impose a centrally planned totalitarian regime such that you and your family shall starve and/or freeze in the dark.
MVR = 9.287732215
Although the accuracy of this premise is significantly high, I feel obligated to consider one point of contention. I do not know how extensively Mr. Goldberg has sampled Herman Daly’s work, but it is my suspicion that he has not delved as deeply as I have dared. I have held both my nose and my temper (in check) while forcing myself to read a substantial portion of Professor Daly’s writings. And to his credit, he does assert the usefulness of the market for allocating goods that are both rival and excludable. One might conclude, therefore, that some proponents of a steady state economy want only a semi-totalitarian state.

Premise #3: America’s reforestation, the decrease of lead and sulfur in our atmosphere, and the removal of some contaminants from our waterways prove 2 points: (1) our environment is the picture of health, and (2) unfettered markets are the key to sound environmental policy.
MVR = 9.973997123
Cheers to Mr. Goldberg for regaining his footing! No doubt taking a cue from my paper, How Infinite Planet Theory Disproves the Existence of the Environment, he has applied an appropriately large discount rate to the findings of conservation biologists, climate scientists and other charlatans who squander their time studying concepts that have no bearing on labor productivity or the liquidity of credit default swaps.

Premise #4: There is no role whatsoever for scientists to inform the economic policies of a nation.
MVR = 5.256662588
Mr. Goldberg begins his downward spiral with this questionable assertion. Surely he knows that economics is the most significant, accomplished and influential of the various fields of science. It is imperative, therefore, that economic scientists dictate all national and international policies. Let us consign the skills (such as they are) of second-tier scientists (e.g., those who rely on inapplicable principles of physics, chemistry and biology) to the development of marketable gadgets and weaponry. With proper roles assigned for first- and second-tier scientists, we can achieve the most important goal of human society: unbounded growth of gross domestic product. 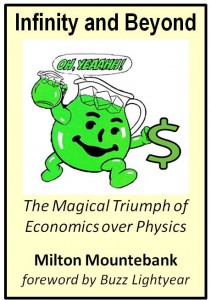 Premise #5: America desperately needs massive economic growth to pay off our debt, sustain our entitlements, and continue to improve the environment.
MVR = 3.113419845
Unfortunately, with this premise, Mr. Goldberg undermines his formerly formidable argument. It is entirely true that we need economic growth, but it is entirely false that we need “massive economic growth.” Perhaps if he had read my book, Infinity and Beyond: The Magical Triumph of Economics over Physics, Mr. Goldberg would know that America desperately needs infinite economic growth. He comes across as a true Malthusian willing to settle for the massive when the infinite is within reach. With infinite economic growth, we can roll over debts forever and ever and ever. We also need infinite growth (and then some) to cover the entitlements coming to me, Mr. Goldberg and our fellow economic elites. And finally, with the riches of infinite growth in hand, we can put the last nail in the coffin of our pesky environment — we shall no longer require an environment in which to live.

Premise #6: When the proponents of infinite (or at least massive) economic growth victoriously proclaim, “I told you so,” those who question growth shall be annoyed.
MVR = 1.034110990
After beginning to unravel his thesis with the previous 2 premises, Mr. Goldberg dismantles his entire argument with premise #6. We shall not annoy the steady staters; we shall enchant them. They shall be in awe of us, sufficiently stunned by our supernatural capacity to banish all ecological limits. I have no doubt that one day the steady staters shall recognize the folly of questioning infinite economic growth and repent. They shall put aside their dreary doomsaying (along with their “facts” and “evidence”) and join us in the magical triumph of economics over physics.

Dr. Mountebank is the John Q. Beelzebub Professor of Economics at Fantasia University.

Ecosystem Services: The Traveling Salesman and the Trophic Conundrum
Scroll to top
$