These days the American conservation community is abuzz with the “surrogate species” approach to conservation. That’s where certain species are selected to represent all the others. Older conservation biologists see it as another iteration of the “umbrella species” concept, where managing for a critter like the grizzly bear would automatically protect a long list of species, simply because the grizzly bear occupies a vast sweep of terrain and habitats.

To protect the thousands of accosted species, one by one, entails dealing with threat after threat after threat, in place after place after place. For a while during the first decade of the 21st century, notions were entertained of doing precisely that! Theoretically we could have worked up some computerized flowchart of species’ population goals, converted all the goals into habitat objectives, melded them all together, and spit out maps identifying precisely which parcels on the landscape were necessary to conserve.

And then of course we would have had to actually go out on the land and protect those parcels. Details!

This whole pipe dream was impossibly complicated, and wouldn’t be possible in the best of fiscal environments. It’s not even close to feasible today as we encounter limits to growth and declining budgets. That’s why we’re back to the umbrella species approach, bottling old wine with a new label, “surrogate species.”

There is another, mostly unspoken rationale for the surrogate species approach. The alternative approach to simplifying conservation — the “coarse filter” approach of conserving various ecosystem types — doesn’t connect so well with publics and politicians. It’s a lot easier to generate political support for a real live critter with fur or feathers than for a “submontane broad-leaved drought-deciduous woodland” or a “succulent extremely xeromorphic evergreen shrubland,” examples of ecosystem types.

Yet either way amounts to basically the same thing. You identify some conservation target — critter or ecosystem — then go out and protect it from the onslaught. Sure, you might have a marginally easier time of it politically by saying you want to protect the bear, wolf, eagle, salmon, black duck, or even some cold-blooded fella such as a desert tortoise. But whether it’s a species or an ecosystem, you either have to stop the economic sectors in their tracks, or buy some land out ahead of the bulldozer and then hope to stop the sectors (and their pollutants) when they reach the gates. That turns out to be not so simple after all. You still have to deal with the mountaintop removal, shale oil excavation, fracking, helicopter logging, stern trawling, factory farming… you get the picture. It’s still the economy, buddy, and it’s getting more unwieldy every day.

It’s time for the conservation community to wake up and smell the notoriety it’s courting for fiddling while Rome burns. If there is a surrogate species in need of attention, it’s the 800-pound gorilla called the economy. It sits there in the corner, growing bigger and more menacing by the day, while conservationists either pretend it doesn’t exist, claim it can grow forever without impacting the environment, or say it’s too big to mess with. None of these three approaches is worth a taxpayer’s dime. 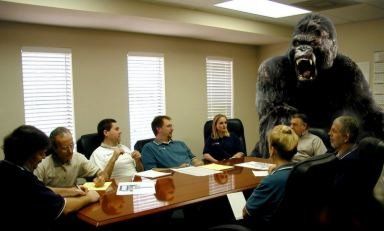 How can we keep ignoring the 800-pound gorilla of economic growth?

If we really want to conserve wildlife and protect the environment, we’d better do exactly the opposite of what we’ve done so far with regard to the 800-pound gorilla. We had better acknowledge the critter, explain to the public why it can’t be reconciled with biodiversity conservation, and not shrink at the thought of it. It is, after all, nothing more than increasing production and consumption of goods and services in the aggregate. It’s measured by the supremely secular GDP. It’s not God, Godzilla, or even (despite the metaphor) King Kong! There’s plenty of precedent in American history for questioning the merits of economic growth, with real effects on public opinion (the demand side of the economy). Real, bold conservationists such as Aldo Leopold and Rachel Carson played a part in this history, as did real politicians such as Robert F. Kennedy and Jimmy Carter.

Conservationists need to learn this history and add a new chapter. Somebody has to lead the way to a new paradigm, away from economic growth and toward the balance of nature. This leadership is just not going to come from Wall Street, the Federal Reserve, or the World Bank. Big-picture leadership is required from conservationists — especially conservation professionals who get paid the big bucks — for developing clear and nuanced public understanding of the trade-off between growing the gorilla and conserving the rest of our fish and wildlife heritage.

Everyone knows that conservation professionals don’t make economic policy. They’re better off not even talking economic policy. But neither did Rachel Carson regulate DDT. Her leadership came in the form of telling the inconvenient truth about organochlorines. The policy implications were obvious. Likewise, leadership to address the 800-pound gorilla starts with rigorous public education. With enough such leadership, citizens will temper consumption from the demand side and economic policy engineers won’t be pulling out all the stops from the supply side. Together — conservationists, citizens, policy makers — we can get that surrogate critter on a sustainable diet!

What if We Stopped Fighting For Preservation?

Who Will Get This Economy Going? No One

Why Do So Many People Believe in the Fantasy of Infinite Growth on a Finite Planet?
6 replies