Just as the smoke disperses from fire-ravaged parts of the world, the specter of ecological breakdown is creeping into humanity’s collective psyche. Whether that manifests as a bit of anxiety or full-on dread of mass extinction, we need to start talking about our feelings. If we don’t, we may avoid rather than confront the reforms needed for the planet to continue supporting life. 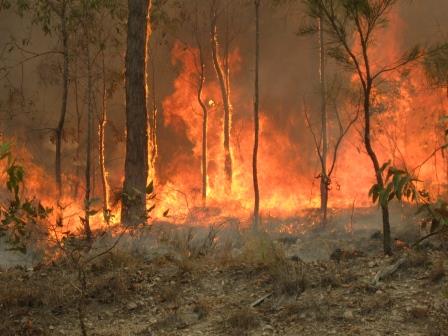 As we stand at the crossroads of a climate crisis, we must acknowledge that the only way to find a solution for protecting our environment is to speak openly about our anxiety about the declining state of our planet. (Image CC BY-SA 3.0, Credit: 80 trading 24)

As a university instructor in Canada, I increasingly hear from students how the notion of financial “retirement security” seems decadent to them. A recent Washington Post article highlighted the sentiment among today’s youth. “We won’t die from old age,” read a placard at an environmental protest. “We’ll die from climate change.” Indeed, youth around the world are concerned about what to do when the weather starts destroying food, water, and energy systems on a more widespread and permanent basis. Or how to reclaim the relevant survival skills and live peacefully with one another should the floods and fires hit home. With such ecological uncertainty in the background—and sometimes in the foreground—it becomes difficult to make committed life choices or undertake (even very critical) administrative tasks. And for me, the kinds of discussions I hope to facilitate about public policy become mired in anxiety and frustration.

For many, and Gen Z in particular, participating in consumer society feels unavoidable yet deeply questionable. Life decisions that once seemed obvious, like getting a house or well-paying job, don’t just seem out of reach, they seem futile. And since our personal choices impact our political opinions, our collective dread is beginning to shape our political and institutional conversations. How do we make long-term decisions under these circumstances?

A great deal of attention has been given to the obstructive nature of climate denial and associated political polarization, but less attention has been focused on the phenomenon of cultural paralysis due to eco-anxiety. In a survey, psychologists Kevin Coyle and Lise Van Susteren describe how fears of extreme weather have become phobic on a widespread level and are experienced similar to the “unrelenting day-by-day despair” that can be experienced during a drought. The delayed and slow impacts of climate change, they write, can be just as damaging as the acute climate impacts, such as wildfires, cyclones, and floods. That’s a psychological double-whammy, paradoxically cloaked in relative personal comfort and material satisfaction. Watching the slow and irreversible impacts unfold and “worrying about the future for oneself, children, and later generations,” is a source of stress, loss, guilt, helplessness, and frustration that inflames existing day-to-day concerns.

Of course, anxiety can either be harmful or helpful. It can be harnessed for pragmatic use under conditions of near-term threat (i.e., “fight” or “flight”), and it can also lead to paralysis (“freeze”).

Recently, a number of news articles have been published about eco-anxiety as if the phenomenon is something to be witnessed from a distance; as if it isn’t yet a pervasive experience shared by all.

Ecological economist and self-defined “realist” William Rees recently opined that Greta Thunberg needs to inspire “more than emotional release about climate change” because the world is “headed toward catastrophe.” He writes, “If you accept my facts, you will see the massive challenge we face in transforming human assumptions and ways of living on Earth,” adding, “I welcome being told what crucial facts I might be missing.” Unfortunately, as he is likely well aware, even accurate facts do not often change hearts and minds, especially for those who are experiencing the “unrelenting day-to-day despair” articulated above.

On the other side of the debate, Guy Dauncey’s “OK Doomer” response to Rees features this declaration: “Spiritually and emotionally it’s not in my makeup to accept defeat, so I have a problem with [Rees’ argument].” Here, too, at least there is an acknowledgement that one might have an emotional response to the ecological crisis, and yet Dauncey’s article features precisely the kind of administrative to-do list that some of us are having a hard time tackling (it’s easier to distract ourselves with affordable luxuries, like four dollar coffee and new tech, thank you very much).

So far, it sounds like if we aren’t “getting the facts” or resisting defeat, we’re just not trying hard enough. But what if we start by acknowledging and accepting the reality of distress instead? Author Clementine Morrigan has suggested that accepting how ecological distress affects human nervous systems is “important political work.”

(Used with permission of the author.)

By doing both the emotional and administrative work at the same time, we might be able to direct a unifying sense of dread into productive channels. Without doing that work, dread may instead fragment into existing political and economic divisions. Fears and frustrations will be directed toward powerholders (e.g., “politicians” and “corporations”), “other” nations (e.g., “China”), and newcomers or other social groups (e.g., “immigrants”) who are perceived to be competing for land and resources.

And therein lies the silver lining about our predicament: It’s difficult to foster meaningful and lasting change in a scenario where things feel fine. Perhaps this moment of fire and fury will foster an opportunity to work through existential dread productively using some of the ideas on this blog. In fact, I would argue that ecological theorists of all kinds already channel their existential dread into discussions of public policy.

We’re collectively feeling a tipping point emerge, and it’s not just ecological. It’s cultural, political, and institutional. We need to face this crisis through effective, honest conversations, transforming our fears into a tool that can create sustainable changes and establish supportive policies for the betterment of our planet.

James Magnus-Johnston is a PhD researcher at McGill University in the Leadership for the Ecozoic program. He’s the Co-director of the Centre for Resilience at Canadian Mennonite University, where he teaches in the fields of business, political studies, and economics, and he serves as a board director with the Assiniboine Credit Union. James previously worked in finance, public policy, and as a social entrepreneur—helping to establish services in food, housing, and experiential learning. He completed his MPhil in Economics at the University of Cambridge, where he studied the growth requirement of the debt-based money system.

Meaning and Ethics in Ecological Economics
Scroll to top
$