Humanity is an irrational lot, prone to denial and short-termism. If rational arguments were primary catalysts for social change, perhaps a steady state economy would already be a reality. Research in behavioural economics and cognitive psychology is beginning to help us understand why human beings don’t always make decisions that are in their best interests. Can we overcome our irrational, maladapted mental hard-wiring to thrive in a post-growth future?

Trailblazing behavioural economists like Daniel Kahneman have discovered that human beings are highly irrational creatures prone to delusion, cynicism, and short-termism. In ecological economics, Bill Rees has argued that our mental genetic presets have hard-wired us for overconsumption and ecological doom. And now, according to a new theory by Ajit Varki and Danny Brower, perhaps it all stems from an overarching psychological predisposition to denial.

In ecological terms, denial might be characterized as the failure to accept the deleterious consequences of economic growth in favour of accepting comfortable fictions that reinforce the status quo. Head-scratching environmentalists often use the word “denial” to reference the irrational “climate change deniers,” who accept the science of familiar things like internal combustion engines, modern appliances, or GDP growth, yet are dismissive of climate science and planetary boundaries. Why are human beings so good at denial?

Ecological economist Bill Rees argues that our ancient “triune” brain is hard-wired for short-term rewards, and those rewards have been amplified by the abundance of our fossil fuel driven economy. Our brain, which runs on an outdated OS, has leveraged its propensity for denial to construct a myth of perpetual growth wherein we can grow the economy and achieve short-term rewards forever. 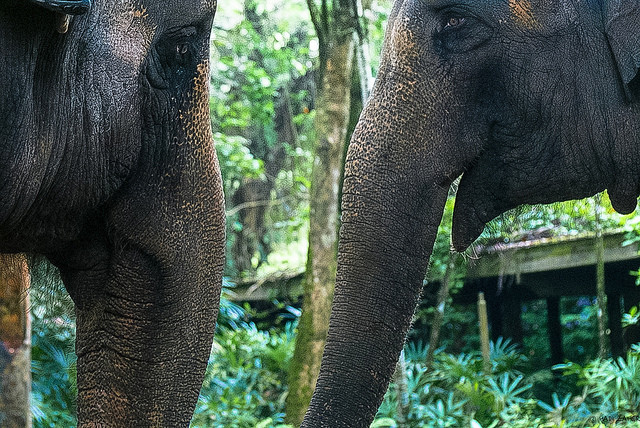 Is it our ability to deny reality that separates us from other highly intelligent animals? Photo Credit: Hadi Zaher

In Denial: Self-Deception, False Beliefs, and the Origins of the Human Mind, Varki and Brower take it one step further. They argue that while our intelligence and use of tools set human beings apart from the rest of the animal kingdom, our capacity for denial may be the greatest differentiating factor. The late Danny Brower asked Varki, a biologist, why other smart, self-aware animals such as elephants, apes, dolphins, whales, or magpies, had not achieved levels of intelligence seen in human beings. Many of these animals can recognize themselves, communicate with one another, and mourn relatives or companions. They have all had more time on Earth to evolve.

The theoretical, though as yet unverifiable, answer put forward by Varki and Brower revolves around two things: (1) that human beings are aware of the thoughts of others, and (2) that they have ability to deny reality. According to them, denial is the essence of what it means to be human! They argue that as human beings became aware of their mortality, some fell into depression while others were able to carry on without becoming crippled by this realization. Mind-over-reality became our defining characteristic, enabling us to maintain sanity in the face of danger. Those who suffer from depression are often more aware of reality, they note, which in turn can cause crippling anxieties. On a society-wide basis, such anxiety can cause an avoidance of procreation, which would be an evolutionary dead-end.

But in the Anthropocene, have the tables turned? Now, reality-accepting behaviour may be an evolutionary boon. Rather than leading to a dead-end, accepting the reality of overconsumption and overpopulation may result in actions that increase the likelihood of human survival. Could it be that those who accept reality have suddenly become cultural (r)evolutionaries better adapted for long-term human survival? Can the shift happen quickly enough to improve our survival prospects?

Perhaps the very evolutionary mechanism which led to our propensity for denial may also temper our unfortunate inclinations. At the point when human beings theoretically developed a capacity for denial, we would have changed the cultural software on our mental hardware, which demonstrates that change is possible. We are capable of changing the way we interact with reality.

Although if one does not accept the premise that we can change our cultural software quickly enough, Varki and Brower point out that reality-denial also leads to optimism, confidence, and courage in the face of long odds–a “can do” attitude. If we can’t accept reality, maybe we can focus instead on denying the current economic “reality” of growth!

Dr. Varki calls for us to temper our denial in order to avoid climate destabilization. Most types of denial, he says–about high national debt loads, eating too much red meat, smoking cigarettes, or refusing to wear seatbelts–aren’t fatal to the entire species. Climate destabilization, like a nuclear holocaust, is a different matter. A shift towards reality-accepting behaviour would help us see the validity of policy prescriptions like reducing the debt load and living within planetary constraints.

More often than not, post-growth thinkers are using rational arguments among a very irrational lot. While rational arguments are certainly necessary, we also need to work on how to ‘nudge’ individuals and communities towards a steady state economy with a pitch that leverages or mutes our irrational operating system. In the meantime, let’s harness our optimism, confidence, and courage in the face of long odds.

Morality in the Womb: More than Meets the Mass’s Eye
7 replies