For several weeks now, the world has been following the movement of troops on the Russia-Ukraine border with a question: What does Putin want? While the Kremlin cites potential Ukrainian membership in NATO as a casus belli, experts have been proposing alternative reasons for why Vladimir Putin wants to invade Ukraine. In a recent post, Brian Czech suggests that the most overlooked reason is the extremely fertile agricultural lands comprising much of Ukraine.

As a Russian person who has been closely following the ongoing conflict in Ukraine and Putin’s career, I see several political and geopolitical reasons for Putin’s Ukraine ambitions. Putin has imperialist and personal motivations for “reuniting Ukraine with Russia.” However, one word that I have never heard in relation to the Russia-Ukraine tensions was “land.”

It is not a secret that Russia has a lot of land, including the “chernozem” (Russian for “black soil”) that Mr. Czech mentions. It is true that agricultural production has become extremely important for Russia since Putin effectively cut Russian food markets from Europe in 2014, citing the need for import phaseout and preferential treatment of Russian-grown produce. However, when we look up the top five wheat exporting countries in the world, Russia is right there. In fact, according to the UN Statistical Division, Russia is the number one exporter of wheat, responsible for 18 percent of the global wheat market. That’s along with top-five rankings for natural gas and crude oil exports, as well as top places for metal exports.

Mr. Czech realizes that Russia is itself a major grain producer, and argues that Putin wants “a lot more of it” (Ukraine’s grain in addition to Russia’s, in other words). Yet, I think resource scarcity is not a problem for today’s Russia. But what is? I have an answer for you: Crimea.

Echoes of a Bygone Era

A closer look at the history of Crimea can give us a better understanding of the events of the last eight years. The question of Crimea annexation was not new in 2014 but had been circling around for some time since the collapse of the Soviet Union. The problem was two-fold. On one hand, the majority of the Crimean population was Russian, which is why the Republic of Crimea was granted autonomy by the Ukrainian centralized government in 1991. Previously, Vladimir Putin shared his sentiment that after the collapse of the Soviet Union, the Russian nation became the biggest fractured nation in the world, and Crimea is not the only place outside of Russian borders with a predominantly Russian population. The Donbas region, which has been in a state of war since 2014, speaks Russian primarily. Parts of Northern Kazakhstan are predominantly Russian. Parts of Baltic states, especially Latvia, speak Russian and identify their nationality as Russian.

When Russia was a colonial empire, the territorial division was hardly relevant. Borders between what was Russia and what was Russia’s colony were artificial, and people, who identified themselves as Russians, were populating every piece of land that they could reach without much thought whether it was Russia or not. Moreover, a big group of Russian subjects was banned from settling near big cities: that is, Jews, who had to settle somewhere, where they would be further from the imperial government but still within the fertile lands of the Pale, including in what is now Ukraine.

The transition between the Russian Empire and the Soviet Union was rough and mostly consisted of an extremely brutal civil war. When the Soviet Union was formed, borders stayed largely the same, drawn not by nationality but by natural boundaries such as rivers and mountains. Generally speaking, today’s borders between former Soviet republics were not given much more thought than the borders in post-colonial Africa or American states west of the Mississippi River.

Compared to the Russian Empire, the Soviet Union was a little less centralized. Local governments were created to administer lands more efficiently, and territorial division in the Soviet Union was less nationalist and more practical. Lands were ceded to the republic that seemed most suitable for administration. This is how the Crimea conflict originated.

Crimea has always had one big geographic problem: water. Crimea gets little rainfall, and rivers are scarce. The land in Crimea was therefore unsuitable for agricultural crops, and even drinking water was scarce. The idea of building a canal from the Ukrainian Dnieper River was proposed all the way back in the 19th century after a massive drought, but construction didn’t start until 1956. Notice the timing here: Crimea was transferred to Ukraine in 1954. 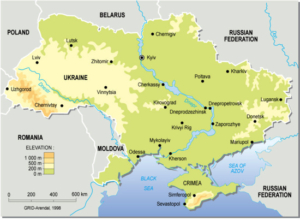 The Kerch Strait links the Black Sea to the Sea of Azov. The Crimean Bridge spans the strait to Russia, but the connection carries no water. (CC BY-NC-SA 2.0, GRID-Arendal)

When Russia and Ukraine were united in the Soviet Union, it was not so relevant for people in Crimea which republic they belonged to. Now fast forward to 1991, when Ukraine declared independence from the Soviet Union and left with its “gift” of Crimea. Suddenly there was an entire Ukrainian peninsula with a predominantly Russian population; an administrative relic from Soviet Union days.  Furthermore, the Russian Black Sea Fleet was still stationed in Sevastopol.

The Crimean scenario still wasn’t a problem when Ukraine was relatively allied with Russia. Even after 1991, Russian people didn’t really see Crimea as part of another country. They didn’t need a passport to travel to Ukraine, and Crimea was a low-cost resort, right along with Russian Sochi and other Black Sea towns. Only after Ukraine started to look to the West did Vladimir Putin warn that if Ukraine were ever to join NATO, it would do so without Crimea and Donbas. Thus, after the Maidan Revolution in 2014, Putin gave the order to annex Crimea.

Despite its proximity to the Russian border, Crimea is effectively an enclave. It is separated from the Russian Mainland by the Kerch Strait that links the Black Sea and the Sea of Azov. After the annexation in 2014, Russia’s biggest infrastructure priority was a bridge between Taman in Russia and Kerch in Crimea. However, even with a bridge constructed, Crimea remains accessible only by car and one train route, a highly restrictive geography for transporting goods. 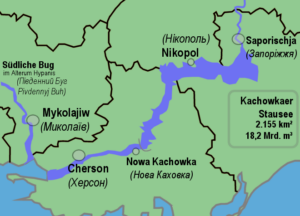 The Kakhovka Reservoir, northeast of Nova Kakhovka (Nowa Kachowka), is the origin of the North Crimean Canal. (CC BY 2.5, Francis McLloyd)

All of which brings us back to the canal originating in Ukraine. To the northwest of Crimea is a town called Nova Kakhovka, and if you zoom in closer, you will see the Kakhovka Reservoir and the origin of the North Crimean Canal. When Crimea was annexed by Russia, Ukraine closed the water flow into the peninsula. While there are some scarce aquifer resources, Crimea faced a centuries-old problem: shortage of potable water (and adequate irrigation water for agriculture and viticulture). In 2018, Radio Free Europe/Radio Liberty reported on a Ukrainian government report that in only four years, Crimea had dried up. (If you compare the satellite imagery in the article, you will notice a stark difference between 2016 and 2018.) The problem has only worsened, with no resolution in sight, other than reopening the water supply from the North Crimean Canal.

Drawing a line between Nova Kakhovka and Rostov-on-Don, we see it goes adjacent to the Donbas region and directly through other Russian-speaking regions of Ukraine such as Mariupol. If Russian troops start in Rostov-on-Don, advance through Donbas and make their way to Dnieper River, they will be able to reopen the Canal. Additionally, if these areas of Ukraine are annexed by Russia (citing the Russian nationality of people who live there), Crimea ceases to be an enclave and Russia gets a decent travel route from one of the major metropolitan areas (Rostov-on-Don) directly to the peninsula.

“Vladimir the Great” Fights for Water

It is hard to say that there is one single reason for the invasion of Ukraine. The idea of this invasion is not new; indeed, this invasion wouldn’t be the first. As Ukrainian president Volodymyr Zelensky said, there is no threat of war with Russia now because the war with Russia has been ongoing since 2014. Tens of thousands of victims of the eight-year-long war in Donbas, tens of thousands of Ukrainian refugees that had to move to Russia because their homes were destroyed by bombs, and 298 passengers of the Malaysian Airlines Boeing-777, who were killed by Russia-backed forces, can attest to that.

Brian Czech proposes that if Putin were to warrant a “the” title (in the traditions of Ivan the Terrible or Alexander II the Liberator), it ought to be Putin the Practical. I’m sure Putin doesn’t mind being practical, but the title he’s really after is Vladimir the Great. 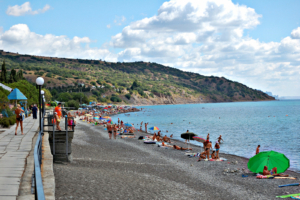 Crimea’s natural beauty, luxury resorts, and sunny beaches have made it a favorite vacation spot for Russians, but fresh water is a limiting factor. (CC BY-SA 3.0, Victor Korniyenko)

For centuries, Crimea has been a tourist destination for the rich and the poor. Russian writers were gaining inspiration from the beautiful Crimean Mountains, while one Russian Czar had an affair while having a vacation in Livadia Palace. In 2014, Putin promised his nation a paradise on Earth, a land with beaches and resorts comparable to Turkish and Egyptian holiday spots so beloved by Russians. But the big dream didn’t materialilze. Crimea became a land of sanctions, where even Russian companies were deterred by Western countries. In addition, Crimea was effectively left without potable water; not the best conditions for a luxurious resort. Is this how Vladimir the Great earns his title? On promises broken for lack of water?

When I first approached the question of a possible war escalation, the question of water supply was the first one that popped into my head. With everything that has been going on in the world, with all the calls between Putin and Biden, meetings with NATO officials, high-level meetings between Putin and Macron, I kept in mind the problem with water. Yet, I can hardly fathom the fact that there can be a full-scale war in 21st century Europe because of potable water. But it is the reality we live in: there can be war in Europe today with massive casualties over access to potable water.

For years and decades now, we have been warned by experts (including Mr. Czech) that access to fresh water will become a problem, especially in the driest lands on Earth, like Sub-Saharan Africa or parts of the Middle East. But, today, we do not need to go that far geographically or temporally to see a very real conflict, which could be triggered by a lack of potable water, and involves not an underdeveloped nation but a nuclear power.

Andrey Beregovskiy is a communications assistant at Johns Hopkins University, where he graduated with an M.A. in Government in 2019.