For the past 40 years, I have spent family summer vacations in Northern Michigan to enjoy a fresh water paradise of small lakes and rivers, along with the Great Lake Michigan. 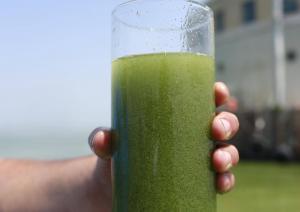 What does this have to do with economic growth? Photo Credit: Haraz N. Ghanbari of AP

This year, not all of the Great Lakes turned out to be great: Lake Erie was covered with massive algal mats at its western end, forcing the closure of Toledo’s water supply that serves 400,000 people. A sample of the intake water for Toledo looked like a glass of thick green slimeade.

So, what is the link between this latest water pollution debacle, economic growth, and a true-cost economy? I will argue that in a steady state, true-cost economy, there would be much less reliance on pollution regulations. The chief tool would be bans, along with significant harm charges, on those products and processes that threatened public health or jeopardized the functioning of life support systems for the earth.

What causes me to advocate such a major change in the U.S. approach to pollution can be seen in three big water pollution events this year. My CASSE blog in March dealt with two significant water pollution events earlier this year–the coal-processing spill that shut down the water supply to Charleston, West Virginia, and the bursting of a coal waste storage pond in North Carolina, sending toxic sludge 70 miles downstream in the Dan River.

In my March blog, I discussed better economic approaches to pollution that would be pursued in a true-cost, steady state economy.  Before going into these approaches, it is important to understand the huge frustration that the American public was experiencing in the 1960s from hundreds of water pollution incidents and the failure of governmental bodies to put a halt to this.

In the early 1970s, many of us worked to obtain the 1972 Clean Water Act that featured the promise of making waters of our nation fishable and swimmable by 1986. Two remarkable examples helped drive public awareness and force Congress to enact this law: the Cayahoga River catching on fire and Lake Erie becoming a dead lake.

If someone had told us that 40 years later Lake Erie would experience massive green slime algal mats, we would have said, “No thanks, we need a truly strong law that would bring back Lake Erie from the dead, not a law so permissive that four decades later we would have a monster slime blob in 2011 stretching 120 miles from Cleveland to Toledo, followed by yet another huge slime mass in 2014.”

So now we are confronted with the abysmal failures of the regulatory system at the state and federal level, along with the tepid responses to the latest pollution disaster in Lake Erie. The time has come to demand a change to our economic approaches to pollution and begin the transition to a true-cost, sustainable economy.

To get down to brass tacks on the Lake Erie green slime, we must recognize that the chief cause is agricultural runoff. According to Don Scavia, director of the Graham Sustainability Institute at the University of Michigan, “the primary driver is the amount of phosphorus entering Lake Erie from agriculturally dominated watersheds.” The state of Ohio reports that two thirds of the phosphorus comes from farm lands.

So let’s start calling for a national ban on gigantic animal factory farms with hundreds and hundreds of animals crowded together. Such factory slum operations would not occur in a steady state economy. They are a microcosm of what happens with too much growth in numbers and pollution. When any population of animals or people get into overly crowded conditions, pollution overwhelms the carrying capacity of the land and water, disease increases, and violence breaks out.  Today, industrial agriculture is increasing in size and adverse impacts, although organic farming is making inroads.

While pushing for bans, we should also demand harm charges for the damages bad agricultural practices have on lakes. Look at the cost of losing a city’s water supply, the health costs, and the costs to the recreation economy in the region. Today animal factory operations and industrial agriculture escape monetary responsibility for the many harms they cause.

The Securities and Exchange Commission (SEC) could require businesses to disclose their pollution externalities when they file their annual financial reports. The Dodd-Frank Act requires companies to disclose conflict minerals in their supply chains, thus setting a precedent for the SEC to act. Revelation of these pollution externalities would constitute the first step in forcing the creators to cover their true costs of production.

My argument runs counter to the major thrust taken to deal with air, land, and water pollution since Earth Day 1970, which was primarily a regulatory approach. Some of the pollution laws have worked quite well, providing crucial health benefits and safeguarding ecosystems, but many are not set to deal with the magnitude of the pollution issues of the 21st century. For example, powerful bee-killing pesticides are causing collapses of bee colonies nationwide. Such pesticides should be banned since they threaten human food supply, about two thirds of which depends on the pollinators. Other pesticides and herbicides kill vegetation relied upon by butterflies such as the monarch that needs milkweed to lay its eggs on.  Bans are possible. Several European countries banned the powerful herbicide atrazine in the early 1990s, but this poison is widely used in the United States despite substantial scientific evidence about its health impacts.

The response taken by environmental groups and official state and federal agencies to the grotesque pollution of Lake Erie has been primarily to call for better regulation, which leads to more bureaucratic procrastination and few results. No one has called for a ban on bad practices of industrial agriculture or called for a shutdown of the big, filthy animal feedlots that are a cesspool of pollution and disease. These should be outlawed! It is not impossible. The Michigan legislature did ban phosphorus in lawn fertilizer.

The industrial agriculture system has grown so large in the United States that it is transgressing planetary boundaries, causing algal blooms and dead zones in lakes, bays, and estuaries. Certain parts of the economy, like those associated with industrial animal slums, need to shrink. Bans and harm charges must become frequently used economic tools.

Economic Growth Takes a Bite out of Fishing