As the concentration of atmospheric carbon dioxide reached the historic high of 400 parts per million, renowned climatologist Andrew Weaver became the first Green candidate ever elected to British Columbia’s legislative assembly. We chatted about politics, the perils of natural gas development, and the public appetite for a steady state economy.

Here’s a politician who thinks his constituents can handle an honest dialogue about climate change. Andrew Weaver doesn’t hide the facts or pander with the wishful thinking of infinite growth. His refreshing candidness might have something to do with his background as one of the world’s preeminent climate scientists. 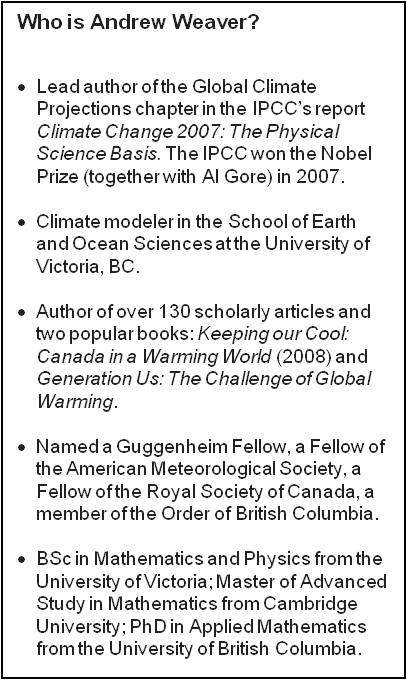 As a mathematician, Dr. Weaver spent years modeling the climate and now has a long list of credits to his name. He has witnessed the climate take a turn for the worse recently, but remains an optimist who believes the problem is “entirely solvable with will and determination.”

CASSE doesn’t endorse any particular political party, but Dr. Weaver’s experience signals that sometimes a sophisticated debate about complex issues can be a winning political formula. Besides, he said, “the Green Party is not there to form government, but there to facilitate an informed dialogue.”

If B.C.’s Green Party were to one day aspire to govern, I wondered, would it adopt the mainstream agenda of “green growth?” Or would it move more seriously in the direction of a steady state economy?

On Science and Politics

The science of climate change has been “settled,” but political action remains elusive or — in the case of the fracking phenomenon — altogether misguided.

“The scientists have done their jobs,” said Weaver. “Now it’s time for politicians to do theirs.” His voice was hoarse from weeks of intense campaigning.

“I hope I can get some first-rate colleagues who are also willing to stand up and see if we can make a difference,” he stated, suggesting that it’s time for more scientists to become politicians.

“People will try to knock you down and say you’re doing it for selfish reasons, but I wanted to set an example.”

He senses a growing demand for intelligent debate and action on complex issues like climate change. “We don’t give the electorate enough credit,” he told me. “People are fed up with stock messages like ‘those Liberals did this’ and ‘the NDP did this’… you can’t just say ‘no tankers on the coast’ or ‘no’ to some other issue.”

I asked him how he would maintain a positive tone in the legislature. “I would like to see non-partisan caucuses on the environment. I think it’s possible. Progressive MLAs will want to work together — and I don’t mean progressive in terms of the left-right divide, but in terms of wanting to further their knowledge on issues.”

As with any campaign trail, Dr. Weaver was challenged by his constituents on a number of policy questions. I wondered which topics resonated with the electorate.

At doorsteps, he said folks wanted to talk about clean, locally-produced energy. They weren’t allergic to the language of economics, either. Dr. Weaver said he used phrases like “the carrot-and-stick approach,” “internalizing externalities,” and “fixing market failures.”

Amid euphoric talk of strong demand for Canada’s resources, he calls natural gas development a “pipe dream.” “Russia has twenty times more natural gas than Canada and they are already supplying gas to China. The U.S. is shifting to clean energy on the west coast, and Australia has abandoned offshore liquid natural gas extraction because they think there’s a price bubble.”

“Under [previous premier] Gordon Campbell, this whole cleantech industry grew and became leaders in the field, but they have lost their guidance”

Now B.C.’s elected officials, he explained, are essentially offering to subsidize natural gas for the Asian market, with little benefit to the provincial economy.

On the Steady State Economy

“Of course we will need something that resembles a steady state economy because it’s a finite world!”

I asked Dr. Weaver to consider the counter-argument: Gail Tverberg wrote recently that a global human population collapse is inevitable; that many animal populations throughout history have followed a pattern of exponential overpopulation and collapse.

“I don’t want to end up on that collapse trajectory and I don’t think we have to do that,” he responded.

Gail notes that human population numbers have correlated closely with energy use — just like economic growth. She argues that we’d have to go back to hunter-gatherer lifestyles to achieve a steady state economy.

She could be right. But why might she be wrong?

Dr. Weaver was quick with his response: “because we’re smarter than phytoplankton!” While phytoplankton or bacteria inevitably grow exponentially in a finite system, human beings are different for a very important reason. “We have brains! We can put men on the moon, we built the Internet! I’m sure we can keep from collapsing!”

There’s that “will and determination” he mentioned earlier.

So, while Dr. Weaver is adopting elements of a steady state agenda, most political parties avoid the rhetoric of anything but growth when they’re seriously vying to govern. Would B.C.’s Green Party still advance the steady state economy if its chances of governing were to improve?

“Yes, that’s exactly the message that would enable us to form government down the road.”

Game On or Game Over for the Environment?
7 replies