I’ve never seen an episode of Duck Dynasty, and I’m not a member of the Green Party, at least not any more. But who hasn’t seen the news, and the Duck Dynasty reminds me why I left the Green Party. I’m not sure the Green Party will give a quack, but I do think anyone concerned with political strategy should.

Back in 2000 I was actually quite involved with the Greens. The Green Party of the United States was so desperate for qualified candidates that I was approached to run for office; for President of the United States no less! At last count, I had about six votes, not including my own. (I was still undecided.) Needless to say, we failed to git ‘er done.

Yet it wasn’t a complete waste of time, as we did manage to insert a plank calling for a steady state economy — stabilized population and per capita consumption, in simplest terms — which was a first not only for the Green Party but for any political party on the national scene. In fact, it may have been the first formal act of steady statesmanship in the United States.

But my experience with this effort ultimately caused me to flee the Green Party, because it was worse than like pulling teeth. It was like pulling teeth while dodging spitballs — hastily chewed ones — spit from the left and the right.

Which leads us to the Duck Dynasty and its “patriarch” Phil Robertson. With just a few words about you-know-what, this fella opened up a spitball free-for-all. Just think, a duck caller from the Louisiana swamp opened so many cans of worms that the worm population will double before it can be stuffed back into cans. Why there’s gay rights, civil rights, and the First Amendment for starters. Sure enough, politicians from Arkansas to Alaska are jockeying for position, trying to associate themselves with the baby (Innocent Baby Phil) while bailing out the bathwater (Adult Phil and the ZZ Top Shotgunners).

I suppose it all makes for unique entertainment — God knows every other form of entertainment has been beat to death in the country of America’s Got Talent. But for those who are serious about public policy and the prerequisite politics, all the newly escaped worms and the entertainment buzz is another big distraction, sapping the focus and wasting precious time.

Which leads us back to the Green Party. Have you ever wondered how the Green Party got its name? Back in the day when I signed up, I assumed “Green” meant or at least implied that this was a political party all about environmental protection and its obvious aspects such as wildlife conservation, clean air and water, and (by now) climate stability. For me, fresh out of my Ph.D. research, protecting the environment was rapidly becoming the most important endeavor of the 21st century. This was no tree hugger’s tiddlywinks either. A long hard look will clarify for most that a healthy, stable environment is the foundation of a sustainable, prosperous economy, which in turn is the lifeblood of national security and international stability.

And really that’s common sense, no?

Can you imagine my chagrin as the Green Party turned out to know quite little about environmental matters, less yet about natural resource management, and next to nothing about steady state economics? Worse, there didn’t seem to be much focus at all on the environment. The knowledge, passion, and focus was instead meted out to issues that I’m only going to describe, euphemistically, as “off center.” In other words it was a party for the disaffected of all sorts.

Most of us can empathize with the underdog. But there is a time and a place for everything, and as they say, all in moderation.

If your favorite pastime is empathizing with underdogs and you’d like to join a whole team of them, then by all means you should join the Green Party, at least if it hasn’t changed much since 2000. Just don’t expect any political success. On one issue after another, the Green Party goes way to the end of the political spectrum, usually the “left” end in American parlance. It doesn’t take a highly imaginative sense of geometry to realize that such a strategy quickly boxes you into the tiniest corner of the political world. It’s political suicide.

Now I have no interest in running for office, but if I were running with the Green Party, we’d be adopting a new slogan: “First Things First.” Everyone would know what that meant, by virtue of the Green Party’s name. The slogan would be intended to convey a new-found sense of focus on environmental protection. 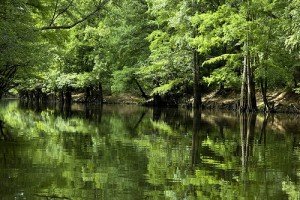 It’s about the bayou, not what’s said on the bayou (photo by Tom Haymes)

First things first — protect the environment and all the awesome potential of the United States can be achieved. Lose focus on the environment and the rug will be pulled from posterity’s future. It won’t matter if the grandkids are gay, duck hunters, or America’s Idol. They’re all gonna need clean air, clean water, a sustainable climate, healthy farms, forests and fisheries, and a bit of wild country for inspiration. They’ll all depend on what we do today for environmental protection.

First things first. Let the Huckabees and the Jindals and the Palins go picking up the worms let loose by Phil Robertson. Let the Charlie Sheens do their liberal lamenting and the A&E’s do their public relations dancing. Meanwhile, let Obamacare sap the energy of its ardent supporters and opponents alike. While you’re at it, let the NRA have at it with the police unions. None of those are dogs in your fight.

First things first. The Green Party is supposed to be about protecting the environment, and we need it. Democrats and Republicans aren’t doing it. Democrats tend to go with the “green growth” propaganda, claiming “there is no conflict between growing the economy and protecting the environment,” while Republicans just say heck with the environment and “drill baby drill.” Both parties are so tight with Wall Street and pro-growth, neoclassical economics that we can never expect sustainable economic policy, and therefore environmental protection, from them.

So at this point in history, Green Party, as you contemplate the New Year, and despite all prior shortcomings, it looks like you’re still the only game in town for providing a significant alternative to politics as usual. It remains up to you to focus on environmental protection. Regarding all those cans of worms, the default response of the Green Party ought to be adopting a central position so that environmental protection can come to the forefront as a decisive issue for the voters.

First things first! Time’s a wasting as green turns to brown, shade by shade. Forget about Ol’ Phil, metaphor for political distraction. Keep your focus on protecting the environment and saving the green space, and even the duck hunters down in Louisiana might vote for you.

Call Me a FOCer: Big Ideas under a Big Sky
7 replies