Nearly 200 years later, Garrett Hardin and Julian Simon were still debating the same question.1 Hardin insisted that individuals’ decisions whether to have children without considering the tragedy of the commons could add up collectively to overpopulation and environmental catastrophe. Simon responded that human ingenuity is “the ultimate resource”. Shortages lead to new inventions that benefit the collective whole. Simon cited 300 years of falling commodity prices, indicating less scarcity, not more, despite population growth from 500 million to 5 billion.

The debate is ongoing, with most mainstream economists supporting population growth, while ecological economists warn about “overshoot” and collapse as the earth’s resources are used up.

One reason this debate has taken so long to settle is that both sides are right. Economies of scale and technological progress mean bigger cities, businesses, machines, and farms can often be more efficient, raising economic output. But with too many people, there are negative externalities—pollution, traffic congestion, crowding, and resource shortages. Above optimum size, cities, businesses, machines, and farms get less efficient. 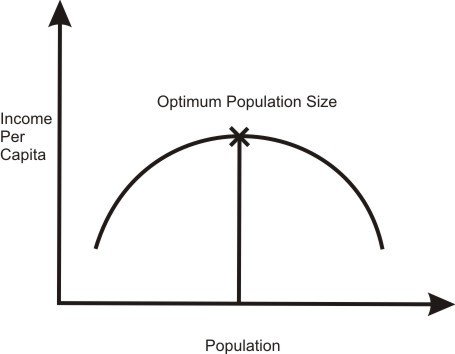 The ideal level of population depends on preferences. How rich do you want to be, and what lifestyle do you wish to lead? Do you want to live in a McMansion (or even a “regular” mansion)? How much space should be reserved for other species? How much space should be reserved for the functioning of ecosystem services such as water purification, carbon sequestration, and nutrient recycling? Do future generations count in these calculations? How much traffic congestion can you tolerate? These questions aren’t asked often enough by sufficient numbers of people.

However, data already exists to settle the long-running economists’ debate about population growth’s effects on incomes and health. Countries that achieved “demographic transitions” to less than 2.1 children per woman enjoy dramatically better economic and health outcomes. The table below compares the most relevant figures associated with four levels of fertility. 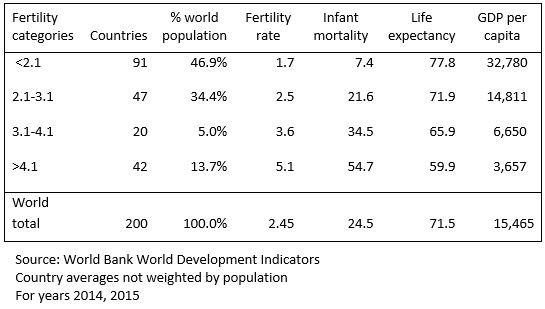 In 2015, the low-fertility countries (<2.1) had average incomes nine times higher than those of high-fertility countries (>4.1). Infant mortality was 47 per 1,000 births lower, and life expectancy was 18 years greater. Of course, many other factors determine incomes and health outcomes: education, natural resources, health care systems, rule of law, improved status of women, and other factors. But the constellation of factors that helps countries prosper strongly correlates with low birth rates. Persistent high fertility rates leave countries treading water, while lower fertility rates make improving the other variables easier. The graph below shows falling global fertility but the substantial discrepancy in fertility between low- and high-income countries.. 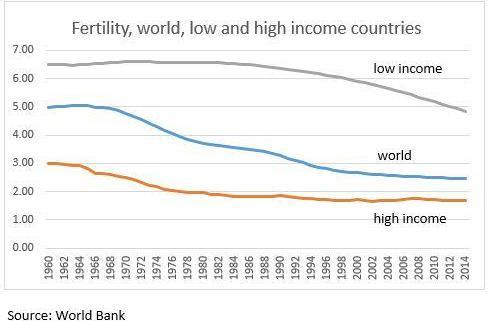 When birthrates fall, a country faces less tax burden because there is less need to expand infrastructure, education, and health care. A “demographic dividend” comes from increased labor force participation by women, more educational expenditure per child, and freeing of capital for investment. Slower growth in population moderates demand and prices of scarce commodities such as land, housing, food, energy, and other commodities.

These effects can also be seen at an individual family level. USDA estimates the cost to raise a child to age 17 at $233,000.3 Women who delay childbearing to get more education have higher lifetime earnings. If parents choose to have fewer children, they can have significantly improved standards of living and higher retirement savings. An only child will probably inherit more than four times as much as a child in a family with four children. In a subsistence farming community, a four-child family-size as the norm halves land per capita every generation. One child doubles per capita family land.

These recent data should end the long-running economists’ debate. In our present world, having fewer children improves economic and health outcomes for individual families and for countries. As the world moves toward steady state economies, reversing population growth improves lives for everyone.

[1] They were literally debating. I attended one of their debates, moderated by a history professor in Madison, Wisconsin in 1983.