On July 30 the Genuine Progress Indicator (GPI) Act was introduced in Congress by U.S. House Representative Ilhan Omar (D-MN). The GPI would indicate the net benefit of economic activity, as an alternative to Gross Domestic Product (GDP). It would be used in the economic and budgetary reporting of federal agencies and government offices.

For me, the timing was remarkable, as July 30 was the very day I signed on with CASSE. Was I effectively out of a job before I even set foot in the office? Was our mission already accomplished?

Not exactly, but Omar’s bill is a significant step in the right direction.

In contrast with GDP, which merely indicates the size of the economy, a properly constructed GPI provides a measure of societal health. Omar’s GPI accounts for economic benefits of things not currently included in GDP accounting, such as ecosystem services, unpaid labor, infrastructure, and sustainable job skills. It also accounts for costs such as resource depletion, greenhouse gases, domestic abuse, and income inequality. 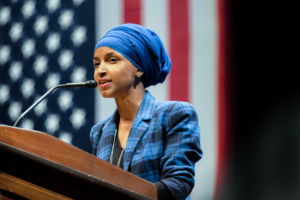 Ilhan Omar recognizes limits to growth. Will her GPI bill be a stepping stone to a steady state? (CC BY-SA 2.0, Lorie Shaull)

The implications for budget formulation are profound. For example, a recent decision by utilities in Omar’s state approving the sale of a coal power plant so it can continue operating would certainly cause a much bigger entry in the “societal costs” side of the GPI ledger.

The bill was introduced alongside a guaranteed income bill, clumsily named the Sending Unconditional Payments to People Overcoming Resistances to Triumph (SUPPORT) Act. Together, the bills double down on the message that GDP ignores (among other things) the maldistribution of wealth and income in the USA.

The summary of the GPI Act and Omar’s comments suggest that she is well aware of not only the shortcomings of GDP as an indicator, but also the destructiveness of perpetual growth. In the press release, John Talberth from the Center for Sustainable Economy (CSE) posits, “We’ve been pursuing growth for its own sake without asking ‘growth in what, for whom, and at what cost?’” Despite her acknowledgement of limits to growth, Omar—perhaps for political purposes—also writes of wishing “to encourage truly sustainable and equitable growth.”

To give the Congresswoman the benefit of the doubt, growth comes in flavors other than the almighty economic. Perhaps she means the sustainable and equitable growth of human potential, human satisfaction, or indeed of mature economic thought.

Among the minimal media coverage of the bill, there have been expressions of disappointment that Omar doesn’t go far enough. For example, the bill would supplement, rather than replace, GDP. Such debatable decisions echo those made in Vermont a few years ago.

But there’s no need to stoke backlash by attempting to topple GDP from its pedestal immediately. Given enough attention, GPI would expose GDP as nothing more than a measure of size, whether good, bad, or ugly. Most people would soon recognize that something genuine is preferable to something gross.

Press Coverage or It Didn’t Happen

Reasons for the scarce media coverage on the GPI bill are undoubtedly myriad: entrenched growth interests, lack of journalistic curiosity, dominance of other major issues in the public eye, etc. Coupling the bill with the SUPPORT Act may have been an attempt at garnering press coverage. Perhaps Omar thought the GPI bill could piggyback off the comparatively well-known concept of universal basic income, which does tend to get media coverage.

Hopes for coverage of the GPI bill were raised by a headline in The New Republic: “The New Economics Is Here.” Unfortunately, the piece is a rather uninspiring call for the Democratic Party to carry on as usual; that is, in pursuit of economic growth as the ultimate goal. The guest authors are from the Roosevelt Institute, a think tank that draws on the legacy of FDR and Eleanor Roosevelt to promote progressive policies.

There’s nothing necessarily wrong with taking inspiration from the past. It’s better than resorting to fantastical visions of the future. Yet, I’d hardly call the perspective of folks born in the 19th century “new” economics. The Roosevelt Institute did flirt with modern proposals in 2017 when they found that UBI payments could be a good thing because they would increase output and growth.

To put a positive spin on the silence, being a lesser-known idea makes GPI less of a target for the culture war that now sparks up around every public conversation. Just look at the ubiquity of comments both for and against guaranteed income payments on Omar’s tweet announcing the bills. Less coverage could help the bill fly under the radar, allowing thoughtful lawmakers of varying stripes to consider lending their support. On the other hand, that low-flying status could also result in the bill being easily and quietly squashed by short-termism and Big Money.

Growth for Whom? And at What Cost?

Ilhan Omar’s story fits perfectly with American self-imagery, aka “the American dream.” She was born in Somalia, one of the world’s poorest countries, and lived there until conflict forced her family to seek refuge in neighboring Kenya. After four years in limbo, they received refugee status in the USA, where Omar made the improbable journey to Congress, becoming one of the first two Muslim women ever elected. 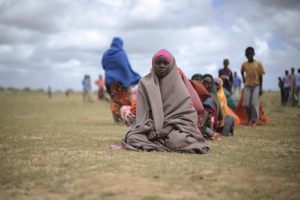 Some of Omar’s family still lives in poverty-stricken Somalia. This may inform her views on GDP. (CC BY-NC-ND 2.0, United Nations Photo)

While she highlights that iconic American narrative, Omar doesn’t seem to buy into the myth that economic growth is as American as apple pie. Her unique perspective has surely shaped her willingness to look intently at the facts. She knows intimately that a decades-long project of global growth hasn’t done much to benefit her homeland, Somalia.

And that’s to say nothing of how climate breakdown—a result of pursuing GDP growth—will continue to exacerbate hunger in Sub-Saharan Africa. Omar’s daughter Isra Hirsi is a Youth Climate Strike organizer. Whichever way inspiration is flowing through the family, it’s an encouraging connection. We could presume that Omar grasps climate well enough to understand how important legislation like the GPI bill could be in addressing it; the fact that the bill came out the week before the IPCC’s latest report might not be a coincidence. Additionally, more refined economic discourse in the climate movement would be favorable, because lowering greenhouse gas emissions won’t happen as long as GDP growth is a higher priority.

A cynic might view the GPI bill as having virtually no chance of passing without the popular support of a burgeoning grassroots movement focused on economic reform. From the demand side, for example, we need a “steady state revolution” for framing conspicuous consumption as bad citizenship. Lacking popular support for steady-state reform, Omar’s bill will be a sitting duck on the House floor (assuming it ever makes it out of committee). 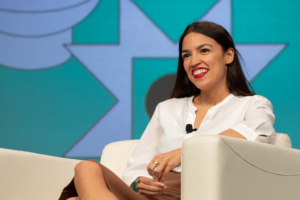 Ilhan Omar’s fellow “Squad” member, Alexandria Ocasio-Cortez, has argued for the merits of doomed legislative efforts. The Squad can get positions on the official record, force developments on issues, and inform future historians. In any case, support from other members of Congress will be necessary, now and in the future.

The GPI bill is currently cosponsored by Reps. Jamaal Bowman, Cori Bush, Dwight Evans, Pramila Jayapal, and Marie Newman. Honorary OG Squad member Bernie Sanders also previously voiced  the need for a GPI, and at one point even pledged to bring such legislation to the federal government himself. Why he isn’t adding his name to this bill, therefore, isn’t entirely clear.

All politicians and their constituents should pay attention though. If politicians propose policies that would grow GDP but not GPI, they should be prompted to explain. Such accountability would be genuine progress indeed.

James Lamont was formerly the communications specialist at CASSE.

IPCC Report: Happily Ever After or Miserable Ever More?
Scroll to top
$