My final week as the director of CASSE was beyond belief. It included oddities such as bear poop, a speeding ticket, a discussion of steady state economics on horseback, and the juxtaposition of ostentatious consumption (an iconic billionaire’s vacation mansion) and humble sharing (an iconic poet/philosopher’s willingness to impart his lifelong wisdom). It also offered an opportunity to pause and reflect on humanity’s predicament, a reflection that produced feelings of hope for the future. All the while, I felt like the dumbest guy in the room.

Five or six months ago, I got a call from Charlie Sing, a prominent professor of human genetics at the University of Michigan. Charlie is one of those larger-than-life people that you occasionally meet.  In his presence, you quickly come to appreciate his Midwestern roots, and, even though he’s nearing retirement, he radiates farmboy charm. At the same time, his intellect is on full display. He likes big ideas, and he likes to think about out how society can make a transition to a resilient and sustainable future. Even more, though, he likes to share good-natured stories and see what new ideas and actions can emerge from the storytelling.

When he called, he invited me to participate in a gathering that he organizes at Mountain Sky Guest Ranch in Montana. He told me that he was pulling together a meeting of friends to discuss ecological economics, sustainable agriculture, and public health, while cultivating a deeper understanding of what’s necessary to achieve a livable future on our overpopulated, overburdened, and over-polluted planet. Charlie is a fan of Herman Daly, and he wanted people at this meeting who could present Herman’s economic vision (Peter Victor, Josh Farley and I were all invited because of our Dalyist point of view). I hesitated to accept the invitation, mostly because I’ve been working to reduce the amount I travel (I’ve been avoiding air travel and trying to adjust to a more local existence). But Charlie’s charms won out, and I agreed to attend, although I determined I would drive to the meeting. I know that driving 900 miles is a sorry way to save on carbon emissions, but it was the best I could do, and I’m glad I did it.

The friends of Charlie (FOCers) are a remarkable gang. On paper, their credentials and accomplishments are formidable. In real life, they’re not only the “best and brightest,” but they’re also caring, hard working, and utterly unpretentious. They chair university departments, manage public programs, conceive and conduct major research projects, run nonprofit organizations, and write influential books. It’s comforting to know that these brilliant minds are hard at work finding ways to make society sustainable.

A couple of months before the meeting, I received a thick brown envelope in the mail. It contained a packet of reading material, including some of my favorite essays by Herman Daly, a selection of insightful papers from other FOCers, and an agenda. On the agenda, I saw that my name was attached to a presentation scheduled for the first night entitled “Strategies for Conserving Ecological Integrity.” My first thought was, “If I knew the strategies for conserving ecological integrity, my services would be in much higher demand!” To put it mildly, I was anxious about the presentation. I’ve given plenty of public talks, but those talks focus on the limits to growth and steady-state economics. I knew Peter Victor would comprehensively cover these topics in the morning, and I felt I had little to add that would enhance the FOCers’ knowledge. So I asked myself a couple of questions:

Deadlines often provide inspiration. As the meeting approached, it hit me. The only story I could tell them that they didn’t already know was my own experience in trying to conserve ecological integrity. And the most useful thing I could do is speak from the heart and bring the emotional aspects of conservation to the forefront. I had a lot of time to contemplate these thoughts on the 15-hour drive to Mountain Sky. And what a drive it was: through the Columbia River Gorge, across the Palouse Prairie, over the Continental Divide, and along the Yellowstone River and Absaroka Mountain Range to the ranch. Two contrasting thoughts, both originating from the view beyond the windshield, conspired to distract me from focusing on my presentation during the drive:

By the time I arrived, distractions notwithstanding, I had a decent idea about what I wanted to say. And that was a good thing, because from the moment I set foot on the ranch until the time I left, my brain was operating at full capacity.

On the opening morning, Charlie laid out the game plan for each day. We’d have a morning session, grounded by a presentation. Preselected respondents would provide additional information, and then the whole group could ask questions and offer insights. Afternoons would be free so that participants could explore the ranch and its vertical surroundings and enter into less structured discussions. Evenings would feature another presentation with time for discussion.

That first morning, Peter Victor delivered his entertaining and information-rich synopsis of his work on Managing without Growth. During the discussion, I felt a sense of relief. It’s good to know that some of the smartest and most thoughtful people (confession: in their presence I felt downright ignorant and dim-witted) reject the notion of infinite economic growth on a finite planet. They also readily understood the need to stabilize population and consumption. And they made some astute observations about our situation. The most memorable comment originated from the wonderful mind of Wendell Berry.

He said that in our predicament, neither optimism nor pessimism is particularly useful. An optimistic outlook enables people to set aside problems, along with any sense of urgency about solving them. If you’re optimistic that ingenuity and technology can overcome the limits to growth, then why would you worry about the size of the economy? On the flipside, if you’re pessimistic about the future of humanity (i.e., you think the ship is sinking and we’re all going down with it), it’s hard to muster the energy to fight for the necessary changes. Wendell concluded this line of thinking by recognizing that hope is the key. We may feel stymied by profound problems like climate change, and we may feel saddened about the species being trampled under our collective feet, but by maintaining hope, we nurture a spark that can ignite a movement for change.

Shared meals and shared activities outside the meeting room offered more opportunities for discussion. I went for a hike on that first day with 8 or 10 other FOCers. Besides sustainable world population, we talked about bears, mountain lions, and other animals that sport big teeth and claws (we even got to hear a tale of leopard wrestling that was too bizarre to be made-up). I’m used to walking in bear country, but I always get a little nervous in places where grizzlies roam. I was the first to spot the dinner-plate-sized paw prints in the middle of the trail. A little further up, our intrepid pack came across a dried pile of bear poop. A little further up the trail, we spied a less-dry pile of bear poop. A little further, we found a wet one. By then I was expecting to see the bear around the next turn, but we never did catch up to it. Too bad — if I had gotten eaten, I could have stopped worrying about my talk.

I’ve never given a presentation quite like that. I expressed more emotion in front of a crowd than I’m comfortable with. But I think it was worth it. I used personal stories to exemplify three basic strategies for conserving ecological integrity:

More importantly, I think in some small way, I opened space in the gathering to explore what’s alive in each of us.

With my talk out of the way, I got to listen more intently on the second and third days of the meeting, which were all about sustainable agriculture and medicine. The listening paid off, as I had an ah-ha moment. I already knew that the root of the problem in economics is that humanity’s relationship to nature has been misconstrued. Mainstream economists view the economy as the whole and the environment as a part of the whole. This view is inside out. The industrial agriculture model exhibits the same inside-out flaw. People who run factory farms and concentrated animal feeding operations tend not to notice that they are embedded in a local ecology. The same goes for healthcare. A common viewpoint is that people are at the mercy of their genetics and hordes of external germs on the attack. A more enlightened view recognizes that our genetic makeup and microbes both respond in remarkable ways to the ecological systems in which they’re enclosed. It seems, then, that the root of our problems across a wide range of human endeavor is a distorted view of our place in the natural world. Thus a prerequisite to achieving a sustainable healthcare scheme, agricultural system, or economy is a widespread philosophical change of heart. We must view ourselves and our societies as strands in nature’s web rather than dominators of that web. 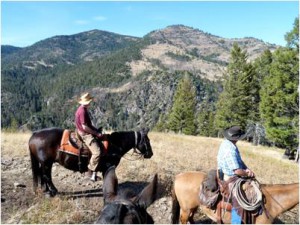 I’d like to say that my ah-ha moment was the highlight of my trip, but it was really the personal discussions I got to have with the other FOCers. I discussed steady-state economics with Peter Victor while riding horses through golden mountain meadows. I told Wendell Berry how much his essay, A Good Scythe, had influenced my thinking and actions. The topics and the pace were unbelievable. From the origins of life to Tuvan throat singing. From economic policy to how to run a dairy farm. From cycling and tai chi to gut microbia and mass communication.

On the last day, just before my return trip, I took a walk with Alan and Katherine Geubert and Tracy Sides. I spent most of the time talking with Alan — he was kind enough to entertain my questions about his distinguished career as a columnist. Toward the end of our walk, we passed by the vacation home of the ranch’s owner, the billionaire businessman Arthur Blank. It’s not what I would call a cabin in the woods, although Alan and I joked that Arthur Blank probably does refer to it as a cabin or cottage. A few minutes later, we saw Wendell (with binoculars hanging from his neck) and Tanya Berry walking across a grassy field. We waved and they waved back. The mansion behind us sure seemed out of place next to the inspiring humility of this Kentucky farm couple. That scene sums up the situation in our world today — inconsistencies (e.g., 1 billion people are malnourished and 1 billion people are obese) are everywhere. I left the ranch that afternoon with a mind full of ideas. One of the best was the realization that simple sights, stories, and connections with colleagues could generate such substantial hope. I was lost in such thoughts when I saw the police motorcycle in the rearview mirror. He issued me the first speeding ticket of my driving career. I guess I was in a hurry. I really wanted to get back home and share my hope with my family.

Hooray for the Underdog
7 replies