A battle is brewing on the outskirts of the general public. A rising tide of quixotic activists is trying to overthrow a time-tested American institution. Like the Battle in Seattle, where the IMF was put on public trial, this new struggle will get a lot of attention, but the institution will remain.

The “institution” in this case is a metric: GDP, or Gross Domestic Product. But GDP isn’t any old metric, like widgets assembled or the price of potatoes. GDP is thoroughly institutionalized at the center of our domestic policy arena. When fiscal and monetary policies are crafted, each is judged according to the likely effects on GDP. If something will increase GDP, it must be good and will likely be adopted. GDP growth is the king of policy goals.

The central logic of pursuing GDP growth is “a rising tide lifts all boats.” As long as GDP continues to grow, it is mathematically possible to have more jobs and increase the amount of GDP available per person. In other words, the “standard of living” can increase with GDP.

The rising tide logic made perfect sense during most of the 20th century, when there was a lot of open water and plenty of boat-building material. But such is not the case in the 21st century. Growing the GDP entails population growth or growth in consumption per person; usually both. Trying to grow the GDP these days causes as many problems as it solves. Biodiversity loss, climate change, and pollution are some of the obvious ones. Noise, congestion, and stress are too. It doesn’t look like GDP growth increases the standard of living after all, unless your idea of living standards is particularly anal. 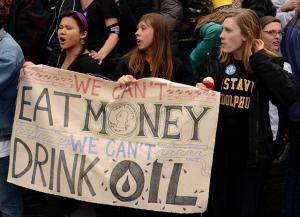 GDP measures environmental impact and the size of our economy, not its health. Photo Credit: Stephen Melkisethian

A more nuanced problem is that GDP growth is addictive, kind of like NFL football or World Cup soccer. It has societies and governments all over the world scrambling like hamsters to keep “the score” from shrinking. Crazy things are done in the name of GDP growth: huge rivers are dammed, Keystone pipelines are built, Supreme Courts kick people out of their homes. (Remember Kelo vs. New London?) A society hell-bent on GDP growth is like a junkie doing whatever nasty thing it takes for the next high, rather than doing the right thing for himself and his family.

Yet the realization is gradually spreading that GDP growth can’t continue forever. This reality is causing societal angst and discomfort. For many, especially in the economics profession and business world, the response is denial. “The world can, in effect, get along without resources” is how Robert Solow, the Nobel prize-winning economist, put it.

But among those with their feet firmly on the ground, seeing the limits to growth materialize, the responses aren’t always prudent either. One such response has been to shoot the measurer, or to be more metaphorically accurate, to shoot the measurement of GDP. The politics of this makes for some exceptionally strange bedfellows. From tree-hugging Earth Firsters to staid Austrian-school economists to think tanks funded by the Rockefeller Brothers fund, performing an exorcism of GDP from the spirit of our political economy is all the rage.

The motives of the GDP antagonists differ wildly, reminiscent of the NRA joining the ACLU to fend off the NSA. Pro-growth, free-market economists don’t like government getting any credit for anything, and GDP calculations include government spending, so GDP must be an evil spirit. On the other end of the spectrum, no-growth proponents who see the government as a force to defeat the pro-growth capitalists (and economists) think… something quite odd. They think that, if we refuse to even acknowledge GDP, we’re less likely to be obsessed with its growth, and we can focus more on healthier goals such as better education and healthcare.

It’s shoddy logic at best. It’s akin to an alcoholic thinking, “If I don’t count those beers I drink, I’m not as likely to drink so many. Then I can focus more on my book-learning and health.”

Shall we have a toast? Let’s drink to not counting those beers!

Due to the fundamental structure of the economy, the size of the economy – as measured by GDP – is a perfectly valid indicator of environmental impact. Agricultural and extractive sectors form the base, which must expand to support the growth of manufacturing and service sectors – yes even the “information economy.” This structure, which is the closest thing in economics to an inescapable law of physics, gives us the “trophic theory of money,” which says that the level of expenditure (GDP, in other words) is proportionate to environmental impact including such tangibles as biodiversity loss, climate change, and pollution in the aggregate.

So let’s not shoot the measurer or the measurement. Let our friends in the Bureau of Economic Analysis calculate GDP as consistently as they’ve done for over 80 years. They perform a valuable service, and GDP is an invaluable metric. Instead of shooting it, let’s help to ensure the appropriate attitude toward ever-growing GDP: that is, a growing sense of alarm and a concomitant determination to stabilize the size of this economic ship before it sinks as surely as the Titanic.