In my very first graduate statistics course, the professor often cautioned us about data collection: “Garbage in, Garbage out.” What she said, in no uncertain terms, was that mistakes in the measurement or methodology would invalidate our statistical analyses. I’ve consistently reminded myself of this mantra. My colleagues, students, and I double check the sources and methodology behind any data we’re testing. If we aren’t entirely confident in the integrity of the data, we toss it into the garbage instead of using it to propagate further garbage.

At CASSE, we’ve noticed some changes in the accounting methods used to tally CO2 emissions. Uncannily, these changes seemed to take root around the same time CO2 emissions were shown to decline in the USA. We were immediately skeptical, because extremely powerful interests would benefit from a display of declining CO2.

After an investigation of the scientific literature, the answer turned out to be a bit more complex than we previously imagined.

U.S. Emissions by the Number

In April, the U.S. Environmental Protection Agency (EPA) published an inventory report on greenhouse gas emissions and sinks in the USA from 1990-2019, and it suggests some cause for cautious optimism. Emissions rose steadily from 1990-2007, then reversed course and have declined ever since. As of 2019, U.S. emissions are only 1.8 percent higher than they were in 1990, due primarily to decreased energy use stemming from innovation and conservation efforts. 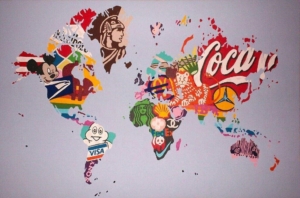 The inventory is a synthesis of annual reports that the EPA prepares pursuant to the United Nations Framework Convention on Climate Change (UNFCCC). Ratifying nations of the UNFCCC agree to estimate greenhouse gases with global warming potential emitted within their boundaries so that a global assessment of greenhouse gas emissions can be made. The primary concern is CO­2, due to its major role as a greenhouse gas, and as a standard by which other gasses are measured for their potential to trap heat in the atmosphere.

This method of estimating global emissions makes the simple but important assumption that each country is responsible for the greenhouse gasses emitted within its boundaries. Experts[i] began questioning this assumption in the late 2000s because it omits a crucial step in the supply chain: global trade.

Focusing on CO2, let’s explore how discounting the consumption of goods—foreign or domestic—can bias our understanding of who is responsible for emissions. We can then examine how a more thorough understanding of emissions accounting can empower consumers to reduce their own emissions.

Taking stock of emissions in this manner is referred to as “territorial” or “production-based” carbon accounting, though the term “production” can be a bit misleading. These are actually emissions that occur during the extraction of natural resources, the production of goods, and their transport to market within the country. Production-based accounting does, however, account for some global trade by estimating “bunker fuels,” which are emissions from shipping vessels that depart from a territory. 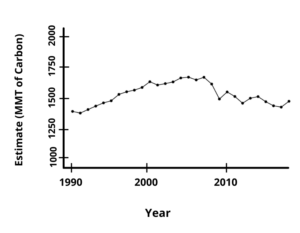 Figure 1. U.S. carbon emissions, measured in million mega tons of carbon. Data from the Global Carbon Project. These data do not include estimates of bunker fuels.

U.S. emissions from 1990-2018 were charted by the Global Carbon Project, a consortium of scientists who use the UNFCCC’s data to calculate and annually publish the global carbon budget in the journal Earth System Science Data[iv]. U.S. emissions steadily declined from 2007-2018 (Figure 1), but how would this story change if we were to consider the implications of global trade? 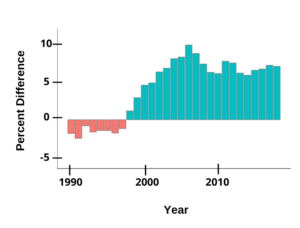 Figure 2. The percent difference between production (red) and consumption-based (blue) estimates in the USA from 1990-2018.

When global trade is considered, the data depict a slightly different story. Until 1998, the USA was actually responsible for less CO2 because more embodied carbon was exported than imported (Figure 2). However, in 2005 and 2007, the USA was responsible for 7.4 percent and 7.8 percent more emissions, respectively. By accounting for imports and exports, we realize that U.S. consumers are significant contributors to annual emissions.

Consumption-based accounting not only reveals a country’s real contribution to the problem, but also the country’s capacity to change.[vii] Imagine that a company in an affluent country decides to outsource a carbon-intensive part of its supply chain to a developing country. While this may benefit the developing country’s economy, this decision also reallocates the carbon emissions from a rich country (with the means to invest in cleaner production methods) to one with fewer resources. Consumption-based accounting helps remedy this ethical dilemma by holding accountable countries with greater regulatory power and higher per capita emission consumption.

Consumption-based estimates are only useful if we address how carbon-intensive our consumption actually is.[viii] Consumption-based accounting suggests that we—consumers—play a vital part in effecting change. Here are some things you can do:

Moral of the Story

While consumption-based accounting may arguably lead to a fairer assessment of emissions, justice is a moving target. The age-old question arises about who really drives the economy: producers or consumers. Was Say’s law ever truly debunked? And don’t producers—augmented by their Madison Avenue advertisers—“produce” demand as well as goods?

The whole discussion evokes the chicken:egg causality puzzle. Which comes first? What is not in dispute is that we have far too much “chicken” and just as much “egg,” all proliferating in lockstep and emitting greenhouse gases along the way. With GDP growth as the central economic policy, production and consumption are even more relentless.

Perhaps the greatest hope for reducing greenhouse gas emissions, then, is not with accounting practices, but starting with the right policy goal. After all, it’s “garbage in, garbage out.”

Negative Externalities Are the Norm
2 replies

The GPI Act: Genuine Indication of Progress?
Scroll to top
$