Modified from the original published in Welcome to Fakeville! (medium.com/@WTFakeville) on May 14, 2020. 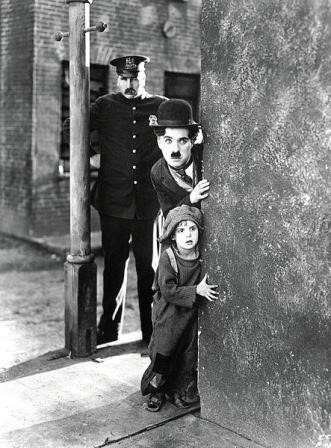 In Charles Chaplin’s classic film, The Kid, the Kid runs around town throwing rocks into windows, setting the stage for his dad, the Tramp, to show up (by chance) with window-repair equipment. The family business is based on destruction.

Between the lines, this film introduces the God of the modern era: economic growth, or Gross Domestic Product. This God should be as terrifying as a sudden rock blasting through a living room window, but society is taught to love him. Our leaders can’t call this God “Gross,” so they give him an affectionate nickname: GDP.

Since the release of the Chaplin film in 1921, the Kid and the Tramp have found more artful ways to increase the Gross Domestic Product.

GDP Dreams: An Apple a Day, Coke from a Young Age, and Insulin for Those Who Can Pay

In Europe, prosecutors found that Apple’s Kid was breaking into iPhones. He was installing updates that deliberately slowed down phones, timing it to coincide with the release of a newer model. In 2018 in Italy, Apple and Samsung were fined for these break-ins. The amount of the fine was a slap on the wrist, as the CEOs apologized on behalf of their Kid, promising to stop him from committing further vandalism.

GDP is calculated by total expenditure. When you’re conned into buying a new phone, the scamster has effectively fed your lifeblood to the voracious God.

Sometimes the scamster is an entire industry. Coca-Cola executives specifically target children in their marketing. Despite the company’s promise to not promote Coke to children under the age of twelve, they use their Kid of TV, magazine, and radio advertisements—some of which feature real-life kids—to persuade children to love the sugary, caloric drink. 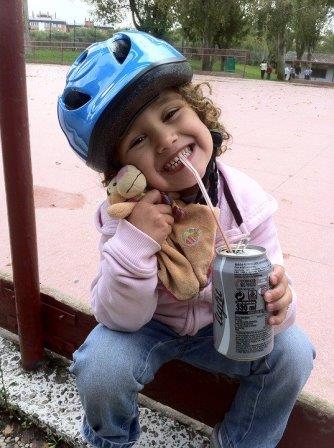 Then, the Tramp comes in. He sells insulin (also known as Coke’s spin-off product) to the diabetic Coke drinkers. The global insulin market went from $27 billion in 2015 to a projected $44 billion in 2021—a triumph for the Kid.

In the race to GDP superiority, our American leaders have allowed for insulin price gouging. The average insulin cost in the USA is seven times higher than the same product in Europe, so Team USA gets to brag about much higher GDP scores compared to the low “socialist” Euro scores. We’re number one!

A major chunk of GDP, the part that best feeds economic growth, is based on the ultimate break-it-and-remake-it business model. Consider the Military-Industrial Complex. Private weapons companies, hyper stimulated by government subsidies, are the biceps of GDP.

Since his debut in the Chaplin film, the Kid has moved on and up. At the behest of intelligence agencies, he travels to far-off lands, promotes conflicts, and thus provides a rationale for our military industry to use the bombs it has produced. It’s bad business to allow inventory to just sit around. These bombs must be used.

Throwing stones into windows was petty compared to dropping bombs on cities. The Kid has really matured. GDP skyrockets every time rockets take to the sky. GDP goes up in proportion to how many people are struck down. Republicans and most Dems agree: The Military-Industrial Complex needs our tax money.

We’ve only touched the surface of GDP growth. A lot is happening beneath that surface, like coal mining and drilling for fossil fuels. The expensive cleanup of the disastrous BP oil spill in the Gulf of Mexico was a great boon to GDP. The quicker we increase fossil-fuel GDP, the sooner we turn our spacious skies / our amber waves of grain / our purple mountain majesties / our fruited plains into the sizzling surface of Venus.

GDP is a nihilistic God. Economists on cable news and in the New York Times serve as his public priests and are well paid for their reverence.

Most economists give lip service to “flaws” in GDP while it remains their go-to God. They will not admit that GDP consists of: 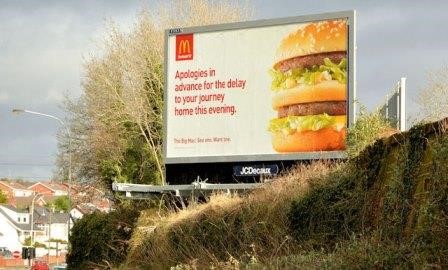 “Apologies in advance for the delay to your journey home this evening,” a McDonald’s billboard reads. Another example of big business taking a page out of the Kid’s manipulative playbook. (Image: CC BY-SA 2.0, Credit: Albert Bridge)

This is a voracious God. But he covers up his grimy lust with neon robes, flashing a few legitimate achievements in products, services, and culture, such as minor league baseball, Shakespeare in the Park, bowling alleys, bicycles, corner cafés, public education, and seven-grain bread. He giveth with one hand and taketh back with a huge shovel.

Economists are incapable of using more humane economic indexes that would expose their country’s faults. For in the end, GDP is a political choice. We must grow—infinitely it seems—even though the planet is finite.

One Buddhist nation, Bhutan, has thus far resisted the GDP God and adopted its own index: Gross National Happiness.

Another nation, Costa Rica, lives by the mantra, “GDP does not measure quality of life.” Notably Costa Rica has no standing army, while achieving a life expectancy of 80.1 compared to 78.9 in the USA.

Next year is the 100th anniversary of The Kid. Maybe by then most Americans will have finally figured out what the Kid’s been up to while they’ve been hard at work.

Mark Cramer is the author of Old Man on a Green Bike and Urban Everesting.

True Conservation: A 21st Century Vision for the Next Director of the U.S. Fish and Wildlife Service
3 replies