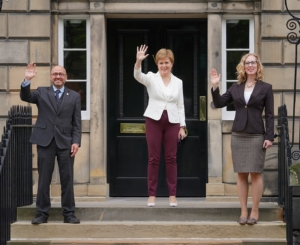 Buried beneath the media chatter about what this partnership could mean for Scottish independence (both parties are in favor) is the fact that a party explicitly against infinite growth is now in power in the UK. Buried, that is, barely below the surface. The opening paragraphs of the Scottish Greens’ manifesto make reference to “the deep shortcomings of conventional economics and the pursuit of endless economic growth.” Also of interest in the same Green Economic Recovery section is a commitment to support the transition to a four-day work week with no loss of pay (for which the SNP recently announced a trial program).

Glass-half-empty types might feel that the election of a junior partner to a partially sovereign national government (embedded in a former superpower desperately trying to remain relevant on the world stage) is not much to get excited about. The predictable gnashing of teeth from the London press only serves to show how much uphill battle remains in winning the argument.

But it’s important to celebrate post-growth victories and to learn from them. Scotland could be the beginning of a steady-state trickle-up into the halls of power. What then, are the prospects for steady statesmanship emerging this month from elections in Norway, Canada, and Germany?

Last Monday the Labour Party of Jonas Gahr Støre won the general election in Norway. They will now have to make the decision to rule as a minority government or in coalition with others.

The Green Party of Norway is the only Norwegian party to have proposed an end date for oil and gas production: the year 2035. North Sea oil and gas currently accounts around fourteen percent of Norway’s GDP and 40 percent of its exports. This explains why the major parties—including Labour—have been reluctant to make similar commitments. Concerns such as the energy shortage enveloping much of Europe have given the state-owned company Equinor an excuse to export an additional two billion cubic meters of natural gas.

While the Greens managed to secure a record number of seats, it wasn’t enough to make it a player in any new government. Nevertheless, analysts credit the release of the August IPCC report (“code red for humanity”) with putting climate at the front and center of the election campaign. This is a big deal for a petro-state, so it’s worth considering how attitudes might also shift on economic growth. 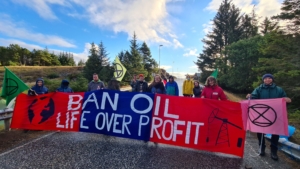 Extinction Rebellion protesters blocked roads to Norway’s oil and energy ministry on August 23rd as part of a ten-day protest against the oil industry.

One could argue that Norway is incredibly well-placed for a steady-state experiment. It has been forward-thinking on issues such as transport, where 70 percent of new cars sold are electric. Fossil-fueled heating systems in buildings are banned. The country isn’t directly dependent on the fossil fuels that it extracts from the North Sea, producing 25 times as much gas as it uses within its borders and exporting emissions ten times its domestic production.

Norway has held the top spot on the Human Development Index for over a decade and is in possession—thanks to its oil and gas—of a $1.4 trillion sovereign wealth fund. Per capita it is one of the wealthiest nations in the world. A pot of money that large provides plenty of room for orderly and just transitions for oil workers, international climate finance, universal income floors, and possibly even the costs of the energy transition itself. Surely, with all these past efforts to support a population of 5.4 million, it’s time for the hardworking Norwegian people to take a rest from growing GDP. As Extinction Rebellion Norway activists put it prior to the election: “We are rich enough now.”

Up, Down, Going Nowhere

A September 20th election in Canada yielded results remarkably similar to those of 2019; Justin Trudeau’s Liberal Party came out ahead but again failed to secure a majority. Given this fact, it’s easy to make the case that the pandemic-hobbled snap election was a waste of time and money, even by the standards of our cynical age. Even Trudeau’s major opponent Erin O’Toole said as much. And it seems to have been especially fruitless in tackling issues of energy and climate.

This year, after Canada experienced the kind of deadly weather seen in much of the world, global heating should have been a high-priority on the agenda. It wasn’t. Perhaps the electoral map remained impressively stagnant because voters saw little new on offer. Trudeau—unique among G7 leaders—has overseen an increase in greenhouse gas emissions. This time around he offered to somehow lower emissions while essentially allowing oil production to rise. The rate of emissions decline is undefined and won’t come into force until 2025. It’s the kind of vacuous doublespeak we have come to expect from politicians that want to grow GDP while ignoring the fundamental conflict between GDP growth and environmental protection.

Meanwhile, the Green Party of Canada has a confusing historical position on economic growth, with its latest platform touting innovation as a green growth engine. Hardly surprising, then, that this bold and clarifying vision left their House of Commons seat count marooned at two out of 338.

With the next national election now potentially years away, perhaps the best hopes for economic change in Canada currently lie outside of electoral politics. A week before the vote, for example, indigenous activists welcomed the decision by Chubb insurance to sever ties with the Trans Mountain tar sands pipeline, becoming the 16th insurer to do so.

Fortunately for steady staters, the nation with the most immediate positive prospects has the largest economy of those considered here. It’s also the largest and most influential country in Europe. Germans go to the voting booth this Sunday (September 26th), and global heating is a major concern for the electorate. 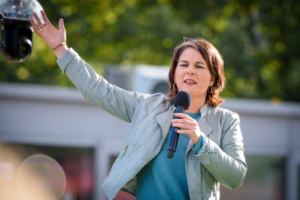 The German Greens have historically been divided into two camps: traditionally leftist “Fundis” and the more moderate “Realos.” As you might deduce from their name, the Fundis have been the more steadfast of the two when it comes to “the fundamental conflict” between growth and green. Prospective Chancellor Annalena Baerbock is of the moderate wing, but it’s difficult to say how the power dynamics of a prospective coalition could shake out.

Back in May polling suggested that the country’s first Green Chancellor was a real possibility, but support for the party has since fallen steadily following a series of controversies. Regardless, it seems likely that the Greens will play a significant role in whatever government is formed and wield more clout than their colleagues in Scotland. Their surge in popularity has led to the possibility that Germany could be facing its first tripartite government since the 1950s. With all three major parties legally committed to a net-zero target of 2045, the case for abandoning GDP growth will strengthen.

Admittedly, the best-case scenarios described above look like long shots from shaky rifles. But daring to envision a better future is what the work of steady-state advocacy entails.

One thing that all these countries have in common is the potential for smaller parties to infiltrate—or at least influence the direction of—government. This can force the big players to provide space in the national dialogue for their ideas, not to mention in policy. If you want to know how the two-party political system in the USA feels about outsider influence, ask Dr. Jill Stein. While simultaneously acknowledging these barriers, we need not be so enamored with election cycles that we neglect day-to-day, long-haul, grassroots work.

Is steady statesmanship still frustratingly out on the fringe? Yes. But should governments continue along a pathway that fails to reign in the destruction of our life support systems, the stupidity of growth will only become more apparent. The readier we are to step forward with solutions when the world comes looking, the better, and that includes getting voices into governments. It can be easy to forget that concepts such as net-zero, just transition, and universal basic income were relatively unknown ideas just a few years ago. Our job is to make steady statesmanship the next exciting idea to influence the political landscape.

James Lamont was formerly the communications specialist at CASSE.

Housing Policy: An Agent for Growth
Scroll to top
$