Among the world’s biggest environmental organizations, there is now a clear leader of the sustainability pack. The National Wildlife Federation has boldly gone where the Sierra Club, World Wildlife Fund, Defenders of Wildlife, and so many others have feared to tread. As the first big NGO in the 21st century to raise awareness of the trade-off between economic growth and environmental protection, NWF has earned the admiration of a burgeoning group of citizens.

Which burgeoning group is that, you ask? Let’s call it the Common Sense Club. They’re tired of the propaganda that we can have our environmental cake and eat it too. The Common Sense Club knows there’s a limit to economic growth, and that growth has been causing more problems than it solves. No, they’re not for high unemployment or poverty – of course not! – but they’re also not for imperiling our grandkids by ruining the environment. The Common Sense Club realizes that, if we care about wildlife, the grandkids, national security, and international stability, we have to strike a balance between the size of the economy and the environment that sustains it.

At CASSE, we’re more aware by the day of how rapidly the Common Sense Club is growing and how diverse it’s becoming. Take for example the five most recent signatories of the CASSE position on economic growth: a Croatian air traffic controller, an Indian economics professor, a Swedish artist, an American banker (that’s right, a banker), and a Dutch computer scientist. The group of steady state signatories is ranging far beyond the original bunch of ecologists and economists who kicked it off seven years ago (although I like to think the original bunch had some common sense too).

But back to the NWF and its resolution on GDP growth; now that’s a real game changer. For the sake of ecological and economic sustainability, the news could hardly be bigger. We finally have a significant counterweight to the neoclassical nonsense that “there is no conflict between growing the economy and protecting the environment.” To put this counterweight in political perspective, the NWF, at 4.4 million strong, has more members than the National Rifle Association. It’s a centrist organization with a rock-solid history.

Why bring the NRA into this? It makes for an interesting contrast because, like the NRA, NWF counts a lot of hunters, fisherman, and general conservationists among its membership. Indeed there is substantial overlap in membership. But NWF also includes a great number of wildlife aficionados who have never pulled the trigger of more than a water pistol. It’s the rare, well-rounded organization that unites citizens far and wide over a mission everyone supports: wildlife conservation.

And wildlife conservation – indeed environmental protection in general – is not a supportable mission as long as the overriding goal is economic growth. That’s why, since the late 1990’s, dedicated ecologists and ecological economists have been toiling in the trenches of professional, scientific societies, engaging these societies in the subject of economic growth. They’ve been working toward days like April 15, when NWF adopted its resolution.

The scientific societies have addressed the issue of economic growth in such venues as peer-reviewed papers, special sections, and series in journals; symposia, plenary talks, and workshops; working groups and committees; editorials and debates, etc. These academic studies and discussions are a critical phase in a broad movement to build awareness, as illustrated below. 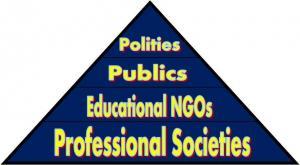 Meanwhile the NGOs (such as NWF) need a sound, scientific foundation to build upon. Otherwise any talk of trade-offs with economic growth can be blown away in the political winds. The collection of papers, proceedings, position statements and policy reviews now constitutes that foundation.

Of course the process of awareness-building isn’t quite as simple as building a pyramid from the bottom up. It is also an iterative process in which NWF’s resolution will empower yet another scientific society to take a position on economic growth, thereby firming up the foundation. The strengthened foundation may then provide the support for the next big NGO (perhaps the World Wildlife Fund, Friends of the Earth, or Sierra Club?) to weigh in. The NGOs are key because, unlike the scientific societies, they have the resources (staff, magazines, mailing lists, etc.) to educate the masses, beginning with their own substantial memberships.

Meanwhile, the general public (third level in the diagram) is being populated by the Common Sense Club. As the Common Sense Club grows, NGOs such as NWF can feel more comfortable telling it like it is about the perils of economic growth. They won’t be left out in the cold, and will in fact attract many new members.

It should also be noted that the NWF didn’t use the “fundamental conflict” language in its resolution. Rather, they simply pointed out that GDP is a poor indicator of welfare because it doesn’t account for many important goals, such as wildlife conservation. But when we recognize that GDP is THE indicator of economic growth, it’s easy to get the point: there is a trade-off between economic growth and wildlife conservation.

Like CASSE, NWF would like to see indicators other than GDP used to assess human welfare. GDP is like the scale for an obese patient; it’s good for indicating how overweight the economy is becoming. But we need a blood pressure cuff and a stethoscope, too, for a broader picture of health. The Genuine Progress Indicator (GPI) and Index of Sustainable Economic Welfare (ISEW) are examples of indicators that help us form a broader perspective of human welfare.

It should also be noted that, in the diagram above, the politicians at the top aren’t necessarily essential for a sustainable outcome. If the scientific societies, NGOs, and general public are adequately aware of the trade-offs between economic growth and environmental protection (and so much else), a steady state economy can result from the “demand side.” In other words, less consumption and more family planning can stabilize the economy regardless of how much the policy makers try to “stimulate” the economy. Ideally, though, policy makers will serve the public that elects them, and gradually set those fiscal and monetary policy levers back toward a sustainable steady state.

Normally, I reserve my own charitable contributions for a few choice NGOs, most notably CASSE and the irresistible Smile Train. But this year I’m joining NWF, and I hope you do too. They earned it!