In the ongoing and increasingly heated discussions about housing, urban planning, and zoning, I often return to Greta Thunberg’s seething indictment of our world’s decision-makers: “Here we are at the beginning of a mass extinction, and all you can do is talk about money and fairytales of eternal economic growth.”

Greta may have been directing her remarks to politicians at the highest levels of government; but, neither should we forget as former Speaker of the House Tip O’Neill once famously remarked, “All politics is local.”

As for unsustainable models of growth, we should pay attention to state and local levels of government with the understanding that housing is often an alibi and proxy for growth. Furthermore, growth is lobbied for and promoted by powerful political and commercial interests, collectively referred to as the Urban Growth Machine.

In local discussions on housing throughout the country, the “anti-growth” label is often bandied about as a kind of insult, along with the term “NIMBY” meaning “Not In My Back Yard.” The city I live in and represent, Beverly Hills, is commonly attacked as being anti-growth (and worse, as well).

As a member of CASSE and someone who is philosophically and firmly in the degrowth camp, I choose to wear this intended insult as a badge of honor. 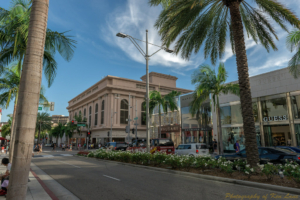 Over 50 percent of our residents are renters (and we have rent stabilization policies to protect many of them, though the state limits our ability to do so), while 65 percent of our housing units are multifamily. Our median household income for 2019 equaled roughly $107,000, less than El Segundo and slightly higher than Ladera Heights.

Of course, there are many misconceptions and stereotypes about Beverly Hills, thanks to our city’s portrayals in the media. With all due respect to Jed Clampett, for many of us who grew up and live here, on our best days we are Mayberry R.F.D. In fact, the iconic opening scene of “The Andy Griffith Show” was filmed in Franklin Canyon, directly adjacent to Beverly Hills. On our worst days, we are, as some of our residents have noted, like Peyton Place in an Ibsen play. In other words, we are just like so many other communities throughout the country.

Urban supremacists who babble on about “agglomeration” look to “superstar” cities as engines of growth. One of their pet economic prescriptions is deregulation, including the deregulation of housing (in line with their neoliberal supply-side fantasies), which would further concentrate opportunity within these metastasizing “superstar” cities.

Never mind that when something is overconcentrated the remedy is to de-concentrate it. Never mind that these urban supremacists espouse a productivist narrative that reduces people to widgets in a scheme of perpetual economic growth. Never mind that they seriously talk about “supply-side progressivism” based on ecomodernist articles of faith, while also trying to paint growth-inducing deregulation as “progressive.”

Talk about the (neoliberal) wolves of Wall Street in sheep’s clothing.

The Neighborhood: A Grassroots Anti-Growth Machine

One of the biggest obstacles to the pursuit of these Wall Street fantasies of eternal economic growth has been the resistance of homeowners and neighborhood groups who have often fought forced growth in their neighborhoods.

In some cases, these neighborhood groups may be on the wrong side; for example, when opposing community-appropriate affordable housing. Typically, however, neighborhood groups are simply opposing mandates that would force density and growth into neighborhoods where the main goal of the growth is money. Money for some, that is.

When it comes to forced density, forced growth, and the Urban Growth Machine, it’s all about the money.

In an attempt to overcome neighborhood resistance to growth, developers and Big Tech have generously funded “YIMBY” (“Yes In My Back Yard”) AstroTurf groups, which aim to paint neighborhood preservationists as selfish, “anti-growth,” and even “immoral” and “racist.”

Since it seems the Urban Growth Machine has figured out that greed isn’t a good look, they use the YIMBY AstroTurf groups to deflect the housing narrative with the red herrings of affordability, racial equity, and, yes, the environment itself. Suddenly, all neighborhoods with single-family homes and gardens are disparagingly referred to as “sprawl.” Of course, this tender concern for the environment is at odds with urban supremacists’ trivialization or outright rejection of the potential of remote work. Geographic equity and regional balance are at odds with the “superstar” megacities that are supposed to be engines of growth, never mind if they are often dehumanizing by design.

Clearly, enough people no longer believe that “greed is good,” and so framing growth and density as virtuous is a way for growthers to cover their tracks.

In fact, the YIMBY groups have been more accurately described as WIMBYs (Wall St. In My Back Yard), considering they are behind much of the pro-growth legislation. Many of these proposed and enacted laws—including California’s SB9 and SB10, both of which Governor Gavin Newsom recently signed into law—purport to be housing legislation, but are actually real estate bills that outlaw single-family neighborhoods; essentially, homes with gardens and trees. Gavin Newsom likes to tout himself as a “progressive pro-environment” hero, but as the recent signing of SB9 and SB10 amply demonstrates, he has completely aligned himself with the Urban Growth Machine as he plots his pathway to the Presidency. 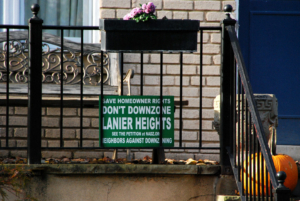 For some of the density fetishists, density itself is the ultimate goal—not to mention the power play of revoking people’s lifestyle choice to live in uncrowded settings. These urban supremacists ignore that everyone has their preferences, and, unfortunately, not everyone has choices. The goal should be to expand housing choices for those who don’t have them, not to take them away from everyone else—including the 80 percent of Americans from all walks of life who prefer single-family neighborhoods—and homes with gardens.

And despite the YIMBY taglines like “density is destiny,” (to which some would counter: “density is preference,” or even, “density is… dense”), densifying in an urban planning context is almost always a proxy for growth. In other words, forcing density upon a community is almost always meant to force (or induce) growth.

There is more than a little irony in referring to these pro-densification upzoning schemes to “urban planning,” because these policies are almost the opposite of urban planning. At best, they are an ill-advised form of knee-jerk urban reacting.

Just ask anyone proposing statutory upzoning or forced density statutes what their ultimate vision is for a city’s ideal size and density. You will invariably get either silence or a question back. You will almost never get back an actual target figure or any kind of fact-based justification. In one instance of rather brutal honesty, a YIMBY suggested that the target population for the Bay Area (currently at around seven million people) should be between 20 and 40 million people.

In this context, the distinction between Democrats and Republicans has become rather meaningless. We would do much better to distinguish between pro-growthers and steady staters (including degrowthers). Another useful distinction is between corporatists and communitarians.

This is why you’ll find “progressive” YIMBY Sonja Trauss (who suggested the Bay Area should grow to up to 40 million people), Jennifer LeSar (the developer-consultant wife of California’s “progressive” senate president pro tem), and Toni Atkins (who drafted SB9) on the board of “Up for Growth,” a group whose name leaves nothing to the imagination and whose chair is developer growth-fetishist and major Trump-donor Clyde Holland.

Policies that fuel economic growth also fuel predatory housing speculation, which enriches people like Clyde Holland and corporations like Blackstone. Those who are truly concerned with housing affordability and who believe that homes are for living in—and not primarily investment vehicles—should look to anti-speculation housing policies, rather than deregulation and other policies aimed at forcing growth.

Steady-State Allies in Our Own Backyards

Just as our national parks were decommodified in the face of ongoing threats from predatory for-profit developers, so should we adopt policies to decommodify housing and to protect real people from the exploitation of Wall Street, private equity, and global capital.

Unsurprisingly, the “Up for Growth” types concoct fairytales to further force density and growth. For example, opioid-pushing consultancy McKinsey, going into its typical growth sales-pitch mode and with visions of lucrative gigs in mind, claimed that California had a housing deficit of 3.5 million units. This figure has been frequently used as a cudgel by Newsom, Atkins, and other Urban Growth Machine representatives in an effort to force growth upon a state that has been losing population. (According to housing giant Freddie Mac, the deficit was 820,000 units pre-pandemic.) 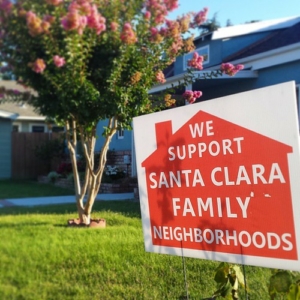 With this in mind, steady staters should consider looking to neighborhood groups and preservationists as potential allies. Many of these groups would welcome community-appropriate affordable housing, but object to the commodification of housing. They object to Wall Street and the Urban Growth Machine’s taking control of their neighborhoods . They understand that forced density and forced growth represent an assault on urban nature and treescapes.

Many of these people are not simply against all change, but because of their experiences at home, they may instinctively sense that fairytales of eternal economic growth are neither desirable nor sustainable. Many of them may instinctively understand how the vision of “superstar” megacities as engines of growth are all part of an “ecological Ponzi scheme.”

Outreach to such groups about the excesses of our world and about how we can recapture human values that transcend money offers an opportunity to refocus on how sustainability, like charity, begins at home. It is not forced density and continual growth that will save the environment, but—notwithstanding the deceptive siren song of “decoupling”—reducing consumption.

People who in their own backyards understand the importance of trees, gardens, and urban habitats, who also see the problems with unchecked, uncontrolled, and unending growth in their own neighborhoods, should be natural allies in our collective efforts to save Earth. Because, despite often being unfairly demonized, many understand innately that this isn’t just about their own backyards. It’s about all of our backyards. It’s about our communities. And it’s about Earth, our one beautiful planet, even if that realization starts in our own backyards, in the gardens we tend to ourselves.

Steady staters and degrowthers often look at the larger forces driving economic growth. Perhaps it’s time to take a closer look at the Urban Growth Machine’s impacts within our local communities, right in our own backyards.

John Mirisch was elected to the Beverly Hills City Council in 2009 and served three terms as mayor. He now serves as a garden-variety councilmember.

Book Review: The Green New Deal and Beyond: Ending the Climate Emergency While We Still Can by Stan Cox
3 replies

The Parliamentary Prospects of Steady-State Politics