Election Day is almost upon us. Along with the 435 House seats are thirty-five seats for grabs in the Senate. Our focus here is on the Senate races, given their high-profile candidates, substantial policy stakes, and excellent examples of growthmanship gone amuck (literally, in some agricultural cases). 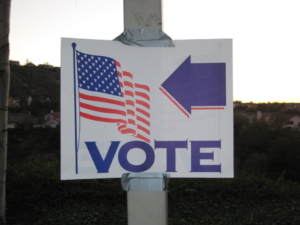 Candidates fall along a spectrum—theoretically at least—from a degrowth to a pro-growth stance. It’s a “theoretical” spectrum because, at this point in the history of the USA, no candidates would qualify as degrowthers or even steady staters, at least based upon their campaign rhetoric. In the coming decades, though, we should expect the spectrum to become a well-known reality, with steady staters offering somewhat of a middle ground (although far more aligned with degrowthers than with the outdated pro-growth crowd). It’s not too early to start considering the comparative politics along the spectrum.

Let’s have a closer look at three of the races pitting obvious pro-growthers against candidates we might classify as growth-agnostic, or at least closer to the steady-state camp than their opponents. In the process we’ll consider a few of the growth-related stakes in Arkansas, Iowa, and Wisconsin. The idea is to provide steady staters with some talking points they can use when meeting with their prospective senators and staff. If done effectively, these senators may adopt some steady-state rhetoric with which to counter the conventional noise of the growthists.

A veritable chemical imbroglio in Arkansas highlights the environmental and health impacts of polyfluoroalkyl substances, or PFAS. Also called “forever chemicals,” PFAS are associated with a wide range of manufacturing activities, products, and wastes. They don’t occur in nature, don’t break down in the environment, and do accumulate in the human body. Nearly all Americans are believed to have some level of PFAS in their blood.

In the Arkansas scenario, military waste containing high levels of PFAS was incinerated at a former military base near Arkadelphia, and would be to this day, were it not for a recent moratorium issued by the U.S. Department of Defense. The incineration process contaminated local soils and water (which doesn’t stay local) with PFAS. For years, the incineration process fell frustratingly within legal boundaries, too, because thus far the Environmental Protection Agency (EPA) hasn’t regulated PFAS as a hazardous material.

Some regulatory inroads may be on the horizon, at least for some types of PFAS. To date, though, the EPA’s authority has been limited to a non-enforceable health advisory indicating that two types of PFAS (PFOA and PFOS) should not exceed 70 parts per trillion in drinking water. It’s anyone’s guess how long the Defense Department’s moratorium will hold.

In 2021 Senator Boozman (Arkansas Republican incumbent) voted in favor of an amendment to the Senate’s budget resolution. The amendment, sponsored by Shelley Capito (R-WV), threatened to lock in place the Trump administration’s “Dirty Water Rule” and prohibit the EPA from crafting stronger regulations to protect our streams and wetlands. In other words, pro-growth Boozman, in lock-step with pro-growth Trump, was more concerned about GDP growth than controlling PFAS and protecting our water supplies and aquatic habitats. 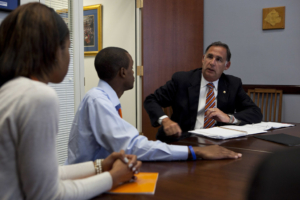 Senator John Boozman (R-AR), far at the pro-growth end of the spectrum. (CC BY-NC-ND 2.0, Bread for the World)

Next in “Dirty Water” line is CAFOs (Concentrated Animals Feeding Operations), such as the CAFO that came to Harrison, Arkansas, where the wastewater treatment plant had no chance of treating the volume of waste spouting from the south ends of north-facing hogs (and vice versa). As the insufficiency of the wastewater plant became depressingly and odiously obvious, the resourceful townsfolk decided to use the waste as fertilizer for nearby farms. Clever in principle, the scheme backfired as the proliferating pig poop was destined to end up in local water supplies.

As with PFAS, pig poop is under-regulated, and the agencies tasked with regulating CAFOs are hamstrung and harassed by pro-growth, free-market politicians. Invariably it’s the same pro-growth pols, including Boozman, who entice the polluters into their backyards to begin with—or more accurately their less-wealthy neighbors’ backyards. (We don’t find Boozman living in Harrison, much less the downstream end of it.)

Global heating is also having profound impacts on Arkansas: worse heat and humidity than Arkansans were already dealing with, plus severe storms and droughts. Thanks to the growthists like Boozman—growthists in a fossil-fueled economy spewing greenhouse gases—these climate effects are worsening and locked in for decades if not centuries. Despite these mounting effects and worsening risks, Boozman is committed to “get our nation to embrace an all-the-above approach to energy security.” Included in the all-the-above approach are “the largest recoverable resources of oil, gas and coal of any nation on the planet.”

Democratic contestant Natalie James’s economic platform is mostly about jobs, but jobs can be created without the economic bloating undermining the Arkansas way of life, which was never about PFAS, CAFOs, or worsening droughts. James would do well, electorally speaking, to take the wind out of the sails of her pro-growth opponent. How? By reminding her fellow Arkansans about what they, their kids, and their grandkids stand to lose—starting with clean water and a habitable climate—by reelecting their posterboy of GDP growth.

Johnson has sponsored bills and held hearings to claim that federal regulations threaten farmers’ livelihoods. Like Trump, he seems to think economic growth is the end-all be-all, claiming, “It is important to eliminate both international and federal barriers that can hinder Wisconsin’s agricultural economy.” One of the “hindrances” is biodiversity, starting with the gray wolf.

Indicating the one-sidedness of his growth obsession, Johnson has complained “Even though it continues to flourish, Wisconsin agriculture also faces threats.” So, even though the Wisconsin agricultural economy “continues to flourish,” greedy-for-GDP Johnson wants more, and sets his sights on anything that might temper the rate of GDP’s flourishing, such as wolves. Instead of assisting with the budding compensation programs for wolf depredation, administered by federal agencies and even Defenders of Wildlife, Johnson pushed to get wolves delisted from Endangered Species Act protection. On October 29, 2020, the gray wolf was delisted in the lower 48 states.

While I haven’t practiced as a wildlife biologist in years, I retain my certification, and my certified guess is that the wolf population in Wisconsin will decline far faster than it (partially) recovered, as “landowners seek to resolve conflicts by killing wolves on their property.”

Another environmental problem in Wisconsin, as in so many other states and countries, is plastics pollution. One example is the accumulation of plastics in the Great lakes. “We don’t have huge garbage patches yet [as in the Pacific Ocean], so the plastic pollution here doesn’t get as much publicity as in saltwater coastal areas,” said Michael J. Carvan, Shaw Professor in the School of Freshwater Sciences at the University of Wisconsin-Milwaukee. 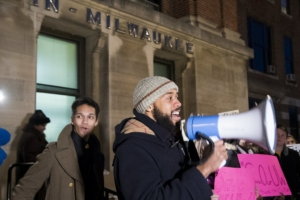 Perhaps Great Lakes plastics pollution should get more publicity, given that 35 million people depend on the Great Lakes for drinking water! Plastic waste is hard on water treatment infrastructure, and microplastics can make their way through water treatment facilities, into our drinking water systems, and thence into our bodies. And, plastic packaging is a common source of PFAS.

Don’t count on Senator Johnson to shield the good citizens of Wisconsin from plastics and PFAS, not with his pride in Pacur, the plastics manufacturing company that enriched him all the way to his prominence in the Republican Party. He even “told backers at a recent event in Wisconsin that his plastics company benefited from a key provision he pushed for in former President Donald Trump’s tax bill in 2017.”

Mandela Barnes, meanwhile, is somewhat analogous to Natalie James of Arkansas. He favors the “small businesses and the working families” that amount to “the heart and soul of Wisconsin.” He could use a little of what Corey Booker came up with in the presidential debates a few years ago: “GDP doesn’t speak to my constituents.” Barnes needs to remind his constituents that Wisconsin’s main GDP man, Ron Johnson, comes complete with Pacur plastics and PFAS.

Iowa has a big problem with agricultural runoff, especially nitrogen and phosphorus from fertilizers. It’s an extensive and an intensive problem: Over 90 percent of Iowa is farmland, and overapplication is common. For decades, water pollution has been one of the biggest environmental concerns of Iowans.

Yet incumbent Senator Grassley lined up with Boozman (and Johnson, for that matter) in passing Trump’s Dirty Water Rule and opposing the EPA. The Dirty Water Rule, while shortlived and overturned, was the most severe weakening of Clean Water Act protections ever. The battle for clean water is far from over. We can expect the Dirty Water rule to be back in some way, shape or form, as long as Congress is populated with so many growthists.

But why would Grassley, in particular, be for dirty water despite the well-known concerns of his constituents? Because the senator and “family farmer” sees deregulation (along with tax cuts) as the key to economic growth. One wonders how dirty the water must get for Grassley to be satisfied with GDP.

Grassley has a miserable lifetime score of 17% from the League of Conservation Voters and his support for pro-growth, anti-environment causes extends to all aspects of the environment, including the air Iowans (and non-Iowans) breathe. It’s true that, when we think about air pollution in the USA, we tend to think about traffic smog in Los Angeles, smoke stacks in Detroit, and both in Newark. We might not know as much about Amana, Waterloo, and Cedar Rapids, three industrial cities in eastern Iowa. Among the 74 million Americans exposed to a cancer risk above the EPA’s “acceptable risk” from air pollution, around a quarter of a million unwitting risk takers are in the Iowa industrial zone. It doesn’t help that Iowa remains one of the most coal-dependent states in the country.

Meanwhile, Michael Franken is largely unknown on the macroeconomic front. His background is centered on the military and national security issues. Presumably he has a sense that the “race for what’s left” is a like a GDP horserace, bringing nations to a “finish line” that’s more like a state of constant conflict and regular warfare. He should realize—or be ready to realize—that peace is a steady state economy.

On the domestic front, Franken has opined that “our financial relief should be targeted to…small business owners and local businesses before being offered to multi national corporations.” There’s potential for steady statesmanship in that, too. Franken should be able to couch his opposition to Grassley as an opposition to the growth-at-all-costs mentality that pervades Congress, pollutes our environment, favors Wall Street over Main Street, and jeopardizes our peace.