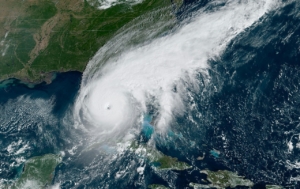 If you’re a steady stater, I know what you’re thinking about Hurricane Ian. For starters, of course, you’re deeply concerned about any family or friends you may have in Florida, along with folks in general along Ian’s path. But you’re also wondering, “What about the pollution?”

The marine pollution that accompanies coastal flooding, most notably from violent hurricanes, is probably ignored by the majority of folks, or thought of only in passing. Throwing up our hands and assuming it a lost cause to worry about such pollution is somewhat understandable, because once a hurricane is en route, very little can be done. Ian is at this moment ushering a panoply of pollutants into the Gulf of Mexico and the Atlantic Ocean per se.

But Ian is just one hurricane, and hurricanes are just one type of flooding event. Now is the time for the wake-up calls to penetrate our local and regional planning authorities, as well as state and federal policy makers who have a say in the rate of growth along our coasts. The costs of inaction include severe marine pollution, loss of coastal freshwater supplies, fiscally debilitating cleanup costs, and the imperilment of numerous species. Furthermore, for all practical purposes many of these costs will be permanent. In other words, we won’t be able to “pay” them out of existence.

Last night on live TV, Don Lemon of CNN was shut down by Jamie Rhome, the acting director of the National Hurricane Center. He’d simply inquired about the linkage between climate change and Hurricane Ian. Rhome replied, “Well we can come back and talk about climate change at a later time; I want to focus on the here and now.” 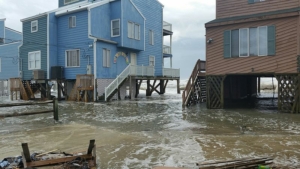 Coastal flooding: slowly via sea-level rise and quickly via hurricane. (CC BY 2.0, NCDOTcommunications)

Rhome’s answer was what we would expect from a politician—for example a coastal mayor or a Gulf state governor—but not from a scientist. Her desire to focus on the “here and now” was understandable with Ian barreling along, but she could have just as easily replied, “Yes, climate change increases the likelihood and intensity of hurricanes. That said; I’d like to focus on the here and now.” A straight answer would have been consistent with her own agency’s findings and the consensus among climate scientists. It also would have contributed, as we’d expect of a tax-paid civil servant, to the knowledge base required of American citizens to respond more wisely to climate change, coastal flooding, and pollution.

In a sense, saltwater is pollutant #1 along our coasts, some of which are far more vulnerable than others. In the USA, the Gulf states are most at risk due to coastal subsidence, which is especially pronounced in Louisiana. That said, all coastal states are vulnerable to sea-level rise except in far northern areas where post-glacial, isostatic rebound is pronounced (most notably in southeast Alaska).

Salts are a major pollution problem over large swaths of the USA. Saltwater is laden with numerous salts including sodium choride, calcium carbonate, potassium chloride, and gypsum. The deposition and buildup of these salts in coastal communities and habitats is like a salt problem on steroids, and that’s just the start of the pollution problem.

As the National Oceanic and Atmospheric Administration (NOAA) reminds us, “Most ocean pollution begins on land.” That’s because land is where we live and (except in rare cases) where we work. Coastal land, especially, is where a lot of this living and working is concentrated.

Approximately 95 million Americans, nearly 30% of the population, live in coastal regions, most of which are vulnerable to hurricanes. All else equal, then, we could assume roughly a third of the economic activity—the general source of pollution—occurs in these regions. 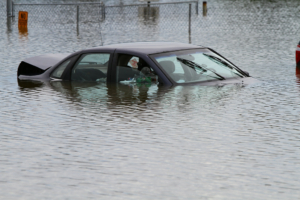 What’s along the coast is what gets flooded. (CC BY 2.0 , Chris Waits)

Of course, not all else is equal. For example, the bulk of big agriculture happens in the Midwest and central California, such that the fertilizer pollution problem is pronounced in freshwater bodies. Notwithstanding the fact that some of the fertilizer load originating upstream makes its way downstream to oceans, we are concerned here primarily with pollutants transported directly into the ocean from coastal ecosystems and communities as a result of coastal storms and flooding.

Basically, “It’s the economy,” planners. If you’re planning for even more of it—you pro-growth coastal planners and politicians—you’re a big part of the problem, especially in the context of climate change.

Hurricane Ian, Itself and as Harbinger

Late last night on Fox News, not long after Don Lemon was shut down on CNN, Florida Governor Ron de Santis called Hurricane Ian “one of the biggest flood events we’ve ever had.” That was correct, and would have been just as correct if he’d called it “one of the biggest pollution events we’ve ever had.” And that puts it high on the list of American pollution events, too.

With a population of nearly 22 million and a GDP of over a trillion dollars, Florida has the fourth-largest economy among U.S. states, less bloated than only California, Texas, and New York. It also has the second-longest shoreline; second only to Alaska. Over half of Florida’s counties are coastal per se (with Atlantic seaboard or Gulf of Mexico shoreline).

With all that economic activity in conjunction with its distinctive economic geography, it doesn’t take a deep dive into a polluted estuary to recognize that the economic activities listed in the preceding section are each prominent in Florida. That helps to explain why Florida has a huge issue with its freshwater supplies, a disastrous plastics pollution problem, and the third most endangered species among U.S. states.

And finally, Florida is right in the bullseye of Hurricane Alley. BP itself couldn’t devise a more perfect set-up for marine pollution.

That’s why environmental scientists are kept up at night and environmental protection groups have been working overtime to warn whoever will listen about what’s at stake. Whether it’s the billion tons of phosphate fertilizer waste, the nine million gallons of leachate at the Lee/Hendry Solid Waste Facility, or the radioactive materials at the Turkey Point Nuclear Generating Station, there’s hardly a unit of matter in the coastal counties of Florida that won’t be hit by the intensifying hurricanes of the globally heated 21st century.

Yet DeSantis and other Florida politicians boast about the rate of Florida’s GDP growth!

Connecting the Dots for Coastal Planning

Let’s see if we can connect some dots for coastal planners, policy makers, and voters. First we have the process of economic growth—increasing production and consumption of goods and services—entailing a growing population and per capita consumption. We still have a primarily fossil-fueled economy (with some coastal nuclear power thrown in), so the growing economy fills the atmosphere with greenhouse gases.

The proliferation of greenhouse gases causes global heating, which in turn causes sea-level rise and the intensification of hurricanes.

Offshore, the vestiges, artifacts, and relics of economic activity degrade our oceanic ecosystems. They alter ocean chemistry, leading to the bleaching of coral reefs (exacerbated by ocean heating) and the demise of fisheries. Animals ingest many of the pollutants, especially plastics ranging from micro to macro. In a somewhat inverse phenomenon, pollutants encompass whole animals; including some of the largest and most precious among them.

As mainstream environmental organizations are accustomed to pointing out, all this environmental impact is a threat to the economy. The Ocean Conservancy, for example, has “a vision for Florida’s ocean and coasts.” They obviously strive for ocean conservation, and find it compelling (and hope it will be for all concerned) to tell us that “Almost half a million Floridians work in the ocean economy, which includes jobs in tourism and recreation, marine transportation, marine construction, ship and boat building and living resources (including fishing). Florida employs more people in marine construction than any other state and ranks 2nd nationally in total ocean employment. The ocean economy contributes $30 billion annually to Florida’s gross domestic product.”

Unfortunately, the conservancy fails to show us the other side of the coin; namely, that it’s all that economic growth that threatens our oceans to begin with!

With environmental messaging like that, the likes of DeSantis, Jeb Bush, Rick Kriseman, Marshall Goodman, and the rest of the Florida politicians hellbent on economic growth will never arrive at the solution of degrowth toward a steady state economy. Instead, they’ll be pushing for GDP growth and causing more global heating, sea-level rise, hurricanes, pollution, environmental impact, and—ironically enough—the collapsing of the economy.

Brian Czech is CASSE’s Executive Director. He led sea-level rise planning efforts for the U.S. Fish and Wildlife Service earlier in his career.

Conservatives and the Steady State Economy: A Natural Fit