This is not a fiction devised by the fossil fuel industry. It is an observable fact.

Ask, for instance, the dozens of birders who ventured to Scotland’s Outer Hebrides for a glimpse of a white-throated needletail, the first sighting of the species in Britain in 22 years. Like other swifts, the white-throated needletail is an adroit flier, catching insects on the wing and even mating during flight. The rare visitor, however, met an untimely demise at the blade of a wind turbine. 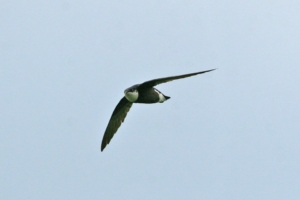 A white-throated needletail met its untimely demise due to the blades of a wind turbine. How many more birds must we lose in our pursuit of “green growth?” (CC BY 2.0, Ron Knight)

The needletail’s death made headlines due to its rarity. Most avian deaths are anonymous, folded into statistics and estimates. Ten years ago, with many fewer wind turbines in operation, researchers estimated that as many as 573,000 birds in the USA alone died each year in turbine collisions. Avian ecologists have predicted that this number will increase to 1.4 million deaths per year by 2030. New wind projects—some situated in important flyways for millions of migratory birds such as offshore facilities planned in New York and Ohio—move forward despite the warnings of bird conservationists.

“Green growth” proponents are keen to point out that wind turbines claim fewer feathered lives than glass-covered buildings or domestic cats. Such comparisons are accurate but beside the point. Heart disease and cancer take far more human lives each year than work-related injuries, but this hardly justifies a disregard for workplace safety. Each bird killed by a turbine’s blades is a bird that might have lived a little longer—completed a migration, raised a new brood of chicks—if humanity had lowered its energy demands enough to make do without that one extra turbine.

Even at the population level, the risk posed by turbines cannot be ignored just because windows or cats are more deadly. It is not as though the construction of wind farms will displace skyscrapers or feral cat colonies; the erection of turbines will just add new fatal threats to the existing ones. And with 29 percent of North American breeding birds lost since 1970, conservationists must take a broad approach to reducing all significant sources of bird mortality.

Collisions are Only the Tip of the Iceberg

The previous estimates of avian mortality are only the beginning. The problem is, in fact, much worse. These estimates account only for birds killed in direct collisions with turbines, but direct collisions are not the only danger incurred with the expansion of wind power (or, as we’ll see, renewable energy in general). Other threats include habitat loss, noise pollution, mining, and the construction of additional infrastructure, such as roads and powerlines.

Some birds will avoid wind turbines. However, the mere displacement of birds from critical habitats due to wind farm installations is also a problem. Recent research reveals, for example, that whooping cranes avoid flying within about three miles of wind turbines. Thus, whooping cranes are unlikely to become victims of turbine collisions. At the same time, however, this endangered bird risks losing critical stopover habitat as more wind farms are constructed along its 2,500-mile migratory pathway from Canada to Texas. Other studies have called attention to other species, such as northern gannets, that face potential habitat loss due to their avoidance of areas in which wind turbines are constructed. 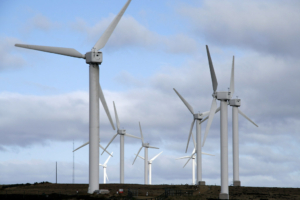 Furthermore, the clearing of land for wind farms can destroy entire ecosystems, taking critical bird habitat with it. For example, a French company has been clearing land for a wind farm in Brazil’s Caatinga region, a biodiversity hotspot and important habitat for the endangered Lear’s macaw. Like the whooping crane, Lear’s macaw was a conservation success story: decades of habitat protection restored the imperiled species’ numbers from only 70 to nearly 2,000. But the striking indigo bird remains vulnerable as it now finds its key habitat under threat again—this time due to so-called green energy.

Another oft-discussed negative externality of wind power is the generation of low-frequency noise, which is a known hazard to human health. Low-frequency noise is harmful to birds, too. It can, for example, interfere with songbirds’ communication, including their ability to produce an attractive mating song (an essential task for a songbird’s perpetuating its species!). Noise pollution also impedes young birds’ abilities to learn their songs and, as with us, induces harmful stress responses.

Moreover, wind farms don’t exactly sprout up from the field. The construction of each turbine requires hundreds of tons of minerals and, hence, massive mining projects that threaten biodiversity and some of the last remaining wild areas.

Consider, for example, copper and aluminum, two essential components of wind turbines as well as other renewables, such as solar panels. Researchers warn that “rushing to bring [new copper mines] into production could unleash unacceptable, catastrophic impacts onto local people and environments.” This, of course, extends to birds. Recently, an open-pit mine was proposed in Jordan’s Dana Biosphere Reserve, a biodiversity hotspot that harbors half of the nation’s bird species. Pebble Mine nearly destroyed an important habitat for 190 bird species in Alaska’s Bristol Bay. Meanwhile, proposals for a bauxite mine in Ghana’s Atewa Forest, one of the planet’s most important biodiversity hotspots, showcase how destructive the procurement of aluminum can be. In recent years, bauxite mines have also threatened vulnerable and declining species such as Australia’s largest cockatoo.

Wind is Not the Only Culprit

It is a trope—and a truth—that wind turbines kill birds, but wind energy is not alone in claiming the blood of our feathered friends. Like wind farms, solar farms pose fatal risks to birds directly, in addition to destroying valuable habitat through the huge land footprints of the facilities themselves and the mining necessary for their raw materials.

Perhaps most infamously, California’s Ivanpah plant has been responsible for an estimated 6,000 bird deaths per year, many of them instantly incinerated when chasing insects into the plant’s concentrated beams of sunlight. The first comprehensive assessment of bird deaths at solar facilities estimated between 37,800 and 138,600 fatalities per year in the USA alone. The fact that this is “orders of magnitude lower” than other sources of avian mortality is no excuse. As the authors emphasize, these numbers will increase as more solar facilities are built. Moreover, whatever the tallies, a needless death is a needless death. Picture, say, this small swallow with badly charred flight feathers; we must do what we can to avoid such tragedies. 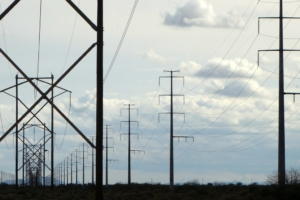 It’s not simply the harvesting of energy that is dangerous to birds, but the supplying and use of energy for economic activity. (CC BY 2.0, Kevin Dooley)

Furthermore, like wind farms, solar farms are land-intensive and pressure bird populations by reducing available habitat. Sociedad Española de Ornitologia (SEO)/BirdLife, Spain’s leading bird conservation organization, has been vocal in its opposition to solar “mega parks” that are being planned in important bird habitat in Andalucía. Such solar “mega parks” would increase the strain on grassland birds, including several threatened species. Another solar facility planned in Aragon will displace a population of little bustards, a once-common grassland bird that has plummeted so rapidly in Spain that SEO now considers it in danger of extinction. In the USA, filmmaker Justin McAffee has been documenting the destruction of desert ecosystems for solar development in his series Desert Apocalypse. Habitat loss could be abated if solar panels were installed on rooftops, say, instead of biologically productive desert and grassland ecosystems. Even rooftop solar, however, requires destructive mining to obtain necessary raw materials and is plagued by a lack of recycling options for solar panels at the end of their usable lifespan.

Hydroelectric dams, too, are disastrous for numerous riparian and wetland ecosystems. While open water may be present, a “fake lake” has little ecological integrity. To give just one example, hydropower has been a major factor in the precipitous decline of the majestic white-bellied heron, one of the world’s most endangered birds.

Finally, we must note that, whatever the power source, it is necessary to transmit the electricity produced to the homes and businesses it will power, and herein lies another major threat to birds. Power lines result in 8 million to 57 million collision deaths each year in the USA alone, in addition to deaths by electrocution. Electrocution is a particular hazard to large birds like the bald eagle: the bird may touch two body parts (such as a wing, beak, or talon) on two wires, sending a voltage shock through the bird’s body. A recent edition of Bird Conservation International documents the fatal threat that the expansion of power lines poses to vultures in Ethiopia and buzzards in Saudi Arabia.

“Green Growth” is No Solution to Climate Change

Some bird conservationists shy away from confronting the numerous threats posed by renewable energy development, averring that it is necessary to tackle the even bigger threat: climate change. Undeniably, climate change is a tremendous threat to birds. A major study conducted by the Audubon Society showed that almost two-thirds of North American birds are vulnerable to climate change. But the choice isn’t limited to either a carbon-based economy or ecologically destructive “green growth.” An alternative is to convert to renewable energy while doing everything in our capacity to reduce energy demands—limiting consumption, shrinking population, localizing supply chains, and perhaps even adopting more good ol’ manual labor. Speaking for the birds, this is the only acceptable choice.

After the death of the rare white-throated needletail, The Guardian ran an article with the headline “Let’s not martyr white-throated needletail to the anti-wind cause.” What I propose is different: We can and should martyr the white-throated needletail to the anti-growth cause. Author Harry Huyton, then head of climate change policy for the Royal Society for the Protection of Birds, bluntly points out that “the infrastructure that supports the kind of lives we have become accustomed to kills wildlife.” He is less direct in stating that we are thus obliged to lower our material aspirations, or that bird conservationists must therefore take up the mantle of degrowth and the steady state economy as inextricable from our cause.

We have here considered only renewable energy infrastructure itself. It would take volumes to expound on the additional harm caused by the activities thereby powered, from the clearing of additional land for agriculture or development to the production of plastics and pesticides to the drowning of the planet in noise and light pollution. Nor have I touched upon electric vehicles, those other darlings of green growth fantasies.

In the span of decades, North America lost more than a quarter of its breeding birds, and Europe has lost nearly a fifth. Meanwhile, 70 percent of all birds on the planet are poultry; the biomass of domesticated birds outweighs that of wild birds by a factor of three to one. To bring back wild birds, we must reduce not only carbon emissions but our entire ecological footprint, regardless of how it is powered.

Kate McFarland is the associate director of the Center for Ethics and Human Values at The Ohio State University.

Game On or Game Over for the Environment?
21 replies