Every year we are inundated with a mountain of content advising us on how to have a low impact or psychologically healthy Christmas, complete with the latest juicy and disturbing figures from our laughably inefficient economy. Caught in a matrix of overbearing social obligations, financial and employment pressures, and the imminent collapse of our life support systems, the proliferation of these articles is a welcome sign. 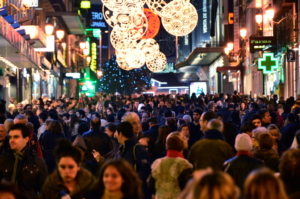 In the thick of the stressful holiday season, one has to wonder what a steady-state Christmas might look like. (CC BY-NC-ND 2.0, Mike Senese)

Here’s the creative, new-economics-style gift I’d like for Christmas: stories. Stories that advance conversations around our economic systems, limits to growth, and the steady state economy. Worthwhile communication can’t be rushed, so all I’m really asking for is that we develop our thinking and discussions around the topic. As recent guest on The Steady Stater podcast Michael Bayliss points out, conversations are a compelling part of the narrative-building project (as shown by the increasing popularity of podcasts).

What does it mean to tell stories about these topics? Some of the more academically-inclined among us might consider this a “squishy” concept, but an increasing body of respectable thinkers believe stories are an essential element lacking from much of our advocacy. Sustainability movements have only recently learned the importance of careful wording and language. Euphemisms should be revealed as misleading rhetoric; for example, “global warming” is better stated as “global heating.” Recognizing the importance of stories is an evolution of the same train of thought.

Where Do We Begin?

On a recent livestream celebrating the life and ideas of CASSE’s chief economic advisor, Herman Daly, Hunter Lovins—co-founder of the Rocky Mountain Institute, and co-author of Natural Capitalism—said:

One of the reasons this has not gone more mainstream is that we have done a lousy job of storytelling about it. The neoliberals had Ayn Rand, Atlas Shrugged, The Fountainhead… Who do we have telling these kinds of stories in ways that are truly captivating?

Perhaps we need to start by recognizing the story we are currently ensconced in, so that we may have a chance of reorienting. Since the 2008 financial crash it’s been common to refer to neoliberalism and growth as the zombie doctrine, staggering on not only because we have been conditioned not to observe it (a refrain about the Devil’s greatest trick comes to mind), but also because no compelling alternative has come to the fore.

In a recent conversation on the Post Carbon Institute’s podcast What Could Possibly Go Right? Diné (Navajo) activist Pat McCabe describes the “modern-world paradigm” of “white supremacy and credit scores” as a collective choice that can be changed. McCabe also speaks of the opportunities now available for retelling history that sheds light on our situation, as mainstream populations become increasingly aware of our societal foundations. Take, for example, the current interest in “tiny houses.” History teaches us that this cornerstone of seemingly alternative living was not that long ago known simply as the normie “house.”

A Crisis of Imagination

When it comes to conveying true stories of the present day, certain movements for economic reform may have a more straightforward job than others. Proponents of a universal basic income, for example, have the recent experience of occasional pandemic checks and the Child Tax Credit to draw upon when asking parents to share their stories of how direct cash changed their lives. Perhaps, as certain enlightened nations begin to adapt their economies to the Century of Supply Shock, an opportunity for post-growth projects will emerge. 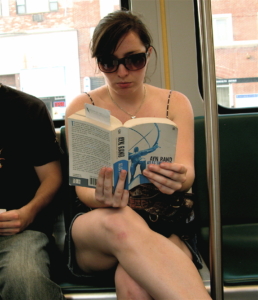 Such projects may include the stories of those working fewer hours and how the work-time reduction has enriched individuals, families, and communities. Reducing workloads is an essential component of the narrative of systemic economic change. As Sarah Jaffe (author of Work Won’t Love You Back) points out, we have an awful lot to do to make our society sustainable, but in order to establish real change we have to offer people more than a massive to-do list. What then, but to labor less?

For the history buffs out there, what did the workers of the past have to say when the workday was shortened? How could this inform what a steady-state Christmas or Thanksgiving might look like, especially compared to the chaos of the holiday season over the last few decades? There’s surely enough dissatisfaction for what the season has become to envision something better.

Released shortly before COP26, Jane and the Dark Cloud: An Animation about Systems Change tells the stories of Jane and Dan. This delightfully animated short contemplates a post-growth Green New Deal that leaves nobody behind. The organization behind it, Swarm Dynamics, believes that “a crisis of imagination exists, in both mainstream society, in the communications and policy work of many environmental NGOs and change makers, and in the popular and contemporary arts.”

Here’s a Story About Being Free

What about creative types who feel their place is on the artistic side of the movement fence? A work of art doesn’t have to appeal to everyone to make an impact. The most popular products of all time—whether it’s Grand Theft Auto 5 or The Bible—can’t even claim to have managed a unanimous seal of approval. But some level of popular appeal should always be considered for wavemakers. Furthermore, we need not just vague sustainability material, but a more overt focus on limits to growth and the steady-state solution.

One of the few more explicit examples of limits to growth in the arts comes from Radiohead, who made it clear they are all aboard the post-growth train, and even lamented the absence of such thinking from mainstream discussion. On the other hand, prog-rock band Muse released a song in 2012 called “The 2nd Law: Unsustainable,” which features a glitchy AI voice monologuing on the second law of thermodynamics (the entropy law). The song, arguably an “acquired taste,” ends with the lines, “In an isolated system, the entropy can only increase. / A species set on endless growth is / Unsustainable.” While the song didn’t garner much attention from anyone besides die-hard Muse fans, the band is an example of how subcultural artists might find pockets of steady-state support.

Such subcultural hits may turn out to be even more important in the long run if, as another recent guest on The Steady Stater (Helena Norberg-Hodge) argues, a more localized world is necessary. Joni Mitchell’s “Big Yellow Taxi,” written after the artist’s first trip to Hawaii after she noticed a distasteful parking lot in the same view of breathtaking Hawaiian mountains, initially only struck a chord with residents on the island. Decades later, however, the song gained popularity on the mainland and around the world, and is now one of the most iconic anthems for climate activists. To create big change, we need works at all tiers of the cultural spectrum.

Turning stereotypically boring economics into compelling tales is still a challenge, but there are some precedents, at least. Wall Street (1987) is a stockbroker story turned capitalist critique featuring a cunning Charlie Sheen appropriating his hero’s mantra, “Greed is good.” The Big Short (2015) was a star-studded story of financial collapse with the assistance of Margot Robbie explaining subprime mortgages and bonds from a bubble bath.

The new release Don’t Look Up features household names Streep, DiCaprio, and Lawrence. It’s a comet disaster movie as allegory for climate breakdown, and the inability of a system centered around profit to deal with crises. This might sound like standard fare for liberal Hollywood, especially in an age of increasing climate anxiety and dystopian fiction, but it has potential.

Could a brave and creative filmmaker go a step further? Could they make the connection—artfully and memorably—back to the bloating economy and those who push it at the highest levels?

Scientists alone don’t change the world. We also need artists. While these two identities are often perceived as opposites, attempting to nurture the partnership would undoubtedly make for an interesting (and likely fruitful) mash-up.

We need to draw on the work of experts in environmental policy, alternative economics, well-being, or communication to ensure that our art and creative thinking projects are expertly informed, and to help others engage wider audiences. 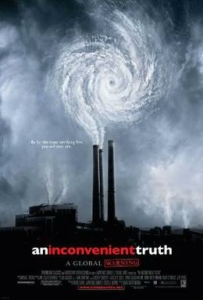 It may be time to question the efficacy of some of the ways these worlds have tried to bridge in the past. Think, for example, of the 21st century boom in full-length, issue-based documentaries. These narratives combine factual journalism with emotive art. But it’s hard to deny that over the years the standard 90-minute hand-wringer—replete with dire information and late sprinklings of optimism—has grown more than a little thin and predictable. Al Gore’s groundbreaking documentary An Inconvenient Truth, for example, despite its problems, was certainly effective in sparking the conversation. As awareness of global heating spread, however, other documentarians sought to stake their claim in the niche, which led to works like Cowspiracy, a film which predictably (and shortsightedly) suggests global vegetarianism will save the planet.

We face the additional challenge of vastly widened entertainment and communication channels. The age of streaming has broken the levy of content, and now thousands of tales vie for our limited attention. This makes for an even tougher sell than described recently in Foreign Policy in Focus. We’re talking about limits to growth here, a phenomenon that has been purposefully shrouded in favor of the story of the mythical “rational economic man” and “green growth.”

Artists musing on limits to growth may not produce a silver bullet capable of penetrating the streaming glut of stories. Netflix alone bulletproofs a large swath of the public from meaningful thoughts of societal import. But for every artist that takes on limits to growth and tells the story of good growing gone bad, the odds of a steady-state culture increase.